It's the first official season of the Alternative Softball League, and hopefully will be one to remember 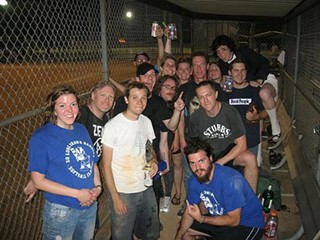 Five teams, co-ed, alternative: It's the first official season of the Alternative Softball League, and hopefully will be one to remember. The ASL was created in order to give local businesses a way to get their sport on, and how better than with a friendly game of softball. We've rallied the troops and drafted five teams that promise to thrill with their trill skills. Some will win, some will lose, but only one team can be crowned champion. Drum roll, please. The ASL is: Waterloo Records, Emo's Alternative Lounge, KOOP Radio, BookPeople, and The Austin Chronicle.

The opening game was played on Wednesday, June 4, between Waterloo Records and BookPeople, ending with Waterloo win, 6-4. The second game, The Austin Chronicle vs. Emo's, was a rescheduling of a rained-out game. It was intense, tied 3-3 at the end of the first inning, but eventually Emo's came through and showed their skills. (Emo's had never won a game before, and were desperate for a W.) The Chronicle was down 4-12 at the start of the bottom of the ninth. Yours truly was up to bat with two outs. Two strikes later, the crowd grew silent. Not to toot my own horn, but I will anyway; I finally hit the ball and got an RBI single. That's all we needed to get the team pumped. Seven runs later, we came back and only lost by one run, 11-12. A great game. Intense.

The next game happens tonight, Monday, June 23, 8pm at Krieg Field No. 1: The Austin Chronicle vs. BookPeople. Should be an exciting game between two winless teams and we hope to see you out there.

Check out the ASL's MySpace page at www.myspace.com/alternativesoftballleague.

Here are the rules and regulations as posted on the ASL page: "This is still a work in progress and will continue to develop and mature. Here are a few of the general rules: 1) Games will be nine innings long with extra innings as per MLB. 2) Players may only play for one team per season. Teams may add legitimate members to their roster throughout the season. All players who play in the field must be in the batting order as well. 3) There must be at least three women in the batting order and two in the field at all times. Teams short on women will have the corresponding number of automatic outs added to their lineup. Catchers may be loaned from the opposing team but will not be responsible for covering the plate. Catchers are encouraged to wear a face mask. 4) Complaints of teams bringing in "ringers" will be decided upon by the council as per complaint. 5) The league council will consist of one team captain per team and the commissioner. 6) Each team will have two captains who will also be part of the umpire pool. 7) Each game will be umpired by two umps drawn from the umpire pool or agreed upon by team captains. 8) The umpire pool will not be limited to team captains, but will consist primarily of team captains. 9) The strikeout rule is three swings and you are out. Including foul balls, etc. 10) Team batting orders will be shared previous to each game. An unlimited number of players may be in the batting order. The batting order will be followed for the entire game. 11) The home team will book the field and pay for the field for that particular game. 12) The season will conclude with a playoff tournament/party to determine the 2008 ASL Champion. The top four teams will qualify for the championship tourney."