What a Crazy Weekend for the Horns 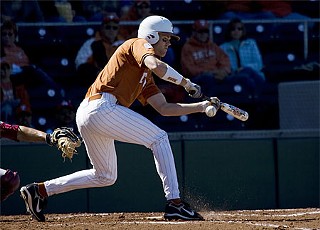 There are many adjectives I could use to describe this past weekend’s series between Texas and Missouri. Amazing, offensive, record-setting, awesome, insane. You name the word, and this weekend probably fit the bill.

First, I want to mention a player who had a career day for anyone, whether they are in Little League or the Bigs. We might never see another single-game effort like it. In the series opener on Friday, Missouri’s Jacob Priday hit four home runs (yes, you read that right) and had nine runs batted in, while scoring six times. Priday’s four home runs in a single game were the most ever in the history of the Big 12 Conference. He was also named Big 12 Conference Player of the Week with a series batting average of .583 and 11 runs batted in. Congrats to Mr. Priday.

I also want to thank whoever made Kyle Russell read my last blog. (I know it’s egotistical to really think he read it, but it makes me feel good about myself.) Anyway, I recently wondered where he had been hiding because he only had two home runs up until last week and his batting average was pretty dismal. Then came the series vs. Oklahoma. Russell launched two homers in that series to pick up the pace. Next up, he decided to rub it in my face by blasting two homers in game one at Missouri and another two dingers in game three.

Mr. Russell, if I offended you in anyway, I am sorry. Actually, thinking about it, maybe he should thank me for my inability to say anything nice about him over the last few weeks. Again, that would be egotistical of me to think I helped him out of his slump. I’m just the fickle sportswriter. Kyle, you are the man.

Now, on to the business at hand.

The Oklahoma State Cowboys (23-10, 8-7 Big 12) come to town for a pivotal Big 12 matchup with Texas beginning Friday at 6:05pm at Disch-Falk Field. Oklahoma State and Texas are tied for fourth in the Big 12, with the loser all but out of contention for the conference title.

During an up-and-down campaign, Oklahoma State has beaten teams such as Texas A&M twice (USA Today ranked No. 8), Nebraska twice (No. 9), Missouri twice (No. 11), and Arizona twice (preseason No. 1). In addition, they are looking to win their third consecutive series in the Big 12 after taking two out of three games from both Nebraska and Missouri.

Here’s my prediction: Kyle Russell will stay hot and go deep at least twice in the series, the young pitchers will stifle Oklahoma State hitters in two of the three games, and Texas will win the series two out of three.

I am being nice, Mr. Russell. Please don’t make me revert to the old me.

An American at Camp Nou
In Spain, soccer is a way of life