And the road trip started so well, too.

After a promising 2-0 start to their six-game road trip, including an impressive 105-102 win over the D-League-leading Idaho Stampede, the Toros promptly decided they'd had enough of that comfy lead atop their division, and have dropped four straight.

The players had expressed concern to me over heading to Albuquerque for a four-game stretch. That's a lot of consecutive games against one team on the road. Then, seemingly out of nowhere, the Thunderbirds had NBA-caliber players rain down on them like mana from heaven. First, there was Julius Hodge, fresh off a stint in Europe, who decided he wanted to play like the first-round pick he was selected as in 2005. Then, Lord Almighty, the Suns decided to send down rookie Alando Tucker to the Thunderbirds. Combine that with Kevin Pittsnoggle's 16 and six he's been averaging since he left the Toros, and you have a dangerous recipe enough. Oh, but wait, there's more. Ian Mahinmi's hip and back that were injured in the Toros' last home game? Yeah, it acted up again. Throw in trying to adjust to the return of Andre Barrett from his call-up to the Clippers and a wrist injury to Kenton Paulino and you have a recipe for disaster.

The results were in line with that recipe. After losing a heartbreaker in OT in the second of four against the Thunderbirds after Hodge hit the game winner, the Toros' defense had what you might call a complete and utter meltdown, giving up an average of 119 over the next three games, and losing by an average of 13. The latest coming at the hands of the Rio Grand Valley Vipers, who held D-League Player of the Week Marcus Williams to 19 points and six rebounds. Williams had been solidly plugging in 25-to-30-point performances before running into the Viper defense.

The Toros are home to start a two-game stand against the Vipers. The Toros decided to beef up their front court, trading longtime guard Cheyne Gadson to Albuquerque for 6-11 center Yemi Nichols. Combined with the explosive return of Andre Barrett and the home cooking of Austin, the Toros look to get back on track. They'll need more of a contribution from their bench, who were outscored 29-18 in their last game. And they'll need to get it ramped-up on offense, as the Vipers held the Toros to under 100 for only the third time since January 1. But with a formidable front court bolstered by the addition of Nichols, and Andre Barrett's adjustment to the Spurs-designed system, Austin should be ready to take care of business this weekend at home, before another road trip.

Currently, the Toros are in first place in their division, and in line for a first-round bye in the D-League playoffs. But with the Tulsa 66ers riding a slew of new additions to a three-game win streak, the Toros need to finish strong in order to secure the bye and home-court in the playoffs.

Matt Moore is the author of the NBA and NBDL blog Hardwood Paroxysm and a contributor at Deadspin.com and The Austin Chronicle Sports blog, the Score. 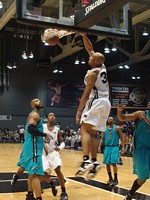