In MMA, like any other sport, planning for a bout and preparing for it are two completely different things. Before his encounter with Britton Lufkin at Saturday's King of Kombat cage fight event, local fighter Garret Bennett had talked about how he was a "ground 'n' pound" man at heart.

But after trading some hard kicks that sent the sweat flying and made the audience wince, the striking quickly became a series of chain submission moves. To Bennett's surprise, it was even quicker than he could have hoped. "I had a key lock, a reverse key lock, and I was going to go for a knee in the stomach, all lined up," said Bennett. But the simple, effective armbar and torque he'd already applied did the job. "I felt his shoulder go pop-pop-pop-pop, and let up, because I wasn't there to hurt him."

There were a few "blink and you'll miss it" results like that, such as Luke Holdorf's seconds-long submission win over Adrian Sanchez. Only one bout, the debut of Muy Thai semi-pro Sherif Ghaly against James "Duece" King Jr., went all three rounds.

A unanimous judge's decision for King, while fair, did not reflect the back and forth: King turned every Ghaly kick into a take down, but the kickboxer's flexibility and power got him out of several submission predicaments. As he seemed to shake off his initial edginess, by the third round Ghaly was becoming a tougher opponent, and a fourth round could have seen a closer decision.

But the most surprisingly quick match was also the most surprising result. In the main event, Chilo Gonzalez was coming in as the favorite over Phillip Preece. A fury of powerful exchanges seemed to be setting the tone of a heavy back-and-forth, and when Gonzalez got Preece in a heavy takedown, it seemed the sprawl 'n' brawl would become ground 'n' pound. But somehow Preece managed to get onto Gonzalez's back, and even when the big Colorado man stood up, the advantage was to the shorter, sturdier Texan. With a rear naked choke applied, Gonzalez could do nothing until, leaning against the fence, he was literally out on his feet. 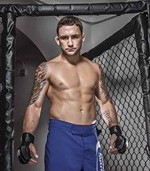 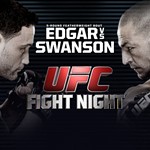