Forget wrangling up a win – the Austin Wranglers (4-11) hope to wrangle up a little old-fashioned euthanasia this week and put this struggling season out of its misery. Whether the Wranglers manage to pull up to the fabled five wins in a single season or not, the safest bet is that first-year coach Brian Partlow won't be taking the team out for pizza after the game.

Nothing came easy this season for Austin's AFL team, which actually made a playoff appearance last season: In addition to the new coach, they've struggled with two new quarterbacks, and Mayor Will Wynn commenting that Austin is the largest city without a professional sports team.

Ouch. Though the Wranglers may not be able to dispute that for much longer. There are reports this week that team officials are contemplating dropping to the AFL minor league, AF2. Though the Wranglers will finish 2007 5-11 at best, team representatives are pushing the financial angle, saying the team is losing money, and dropping to the lower division would lower overhead.

In the minor league, player salaries are significantly less, with most players holding second jobs. If the Wranglers go minor league, standout players like Derrick Lewis, Damon Mason, and Rob Schroeder will not be grabbing applications at Wheatsville; they will be gone.

The final decision will probably be made at an owners' meeting July 29 in New Orleans on Arena Bowl weekend.

This weekend, the Wranglers play maybe their final game as an honest to God pro team vs. the Tampa Bay Storm. Last time, the Storm beat the Wranglers here, 66-45, but according to this week's press release, the real reason to watch is that some of the Wranglers might get considered for individual honors. The game's in Tampa, but true fans and the morbidly curious are invited to a watch party 6pm Saturday at 300 Austin, 9504 N. I-35. It's technically a bowling alley, but if you're a Wranglers fan, you'll be more interested in the drink menu. Sure this would be the perfect opportunity for a "literally ending the season in the gutter" pun, but I'm not a monster. Fox Sports Net will also be broadcasting the game live at 6:30pm. 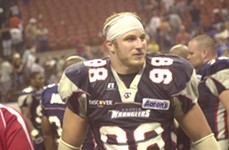 Wranglers Prepare for the Storm 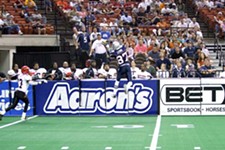