TO Was Probably Thinking About the Eagles the Whole Time

Remember all those mean things I've said about TO in the last few weeks? Probably not – that last sentence is based on the assumption that I have regular readers other than my dad, and the creepy guy who lives in the apartment above me. I have, however, taken a few cheap shots at Terrell Owens, all of which I would've been more than willing to eat if he'd managed to score three touchdowns against the Eagles last week.

Unfortunately for him (because I'm sure he reads this blog all the time), he caught the hat trick against the Texans, something even an average player could do without trying. All he really had to do was stand in the end zone with his arms out. Honestly, I wouldn't have been too surprised if one of the Texans had intercepted a pass in the end zone, gotten confused, and handed it to TO.

The Cowboys still haven't beat a decent team all year, and Owens, whether he's killing himself to humiliate an inferior team or just trying to kill himself in the good old-fashioned way (allegedly), hasn't done anything to justify that $25 million contract.

On a side note, Drew Bledsoe also managed to throw his 250th touchdown pass Sunday. This is another feat that sounds more impressive than it actually is, when you realize he's also counting the touchdowns scored by the opposing team.

Basically, any time the defense holds a team to six points for an entire game in the NFL, the offense better come up with a win if they ever want to feel safe in the locker room showers again.

OK, back to abusing Owens now. I think we should reserve any praise of his performance until after the game against the Giants. If he manages to go a week without making embarrassing headlines and plays a good game against an actual defense, maybe he'll turn out to be a good investment.

Otherwise, justifying TO's salary with 21 points on the Texans is like paying Mike Tyson $10 million to go eight rounds with an autistic puppy. 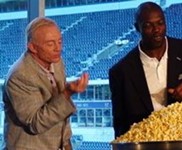 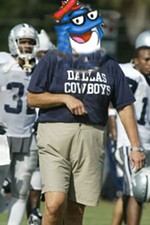