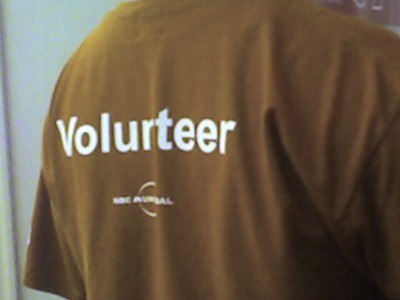 Hook ’Em in the Sprocket Holes
Is it a hallucination due to lack of sleep, or are these Canucks toying with my Lone Star state of mind? The official T-shirts worn here by the army of TIFF volunteers brandish a distinctive burnt-orange color. A gal could be forgiven for thinking that she was at a north-of-the-border Longhorn rally. Man From Plains
Thirty years ago, our nation was gently bemused by the words and actions of our one-term president, Jimmy Carter, as he spoke candidly about having lusted in his heart and challenged us to fight the oil embargo by lowering thermostats, donning sweaters in the cold and casual clothes instead of business suits in the heat of summer. Nowadays, as we confront the realities of blowjobs in the Oval Office, the defilement of congressional pages by our purportedly righteous officials, and the indisputability of global warming, the plainspoken man from Plains, Georgia, seems a lot more less naïve than we once made him out to be. Even his devout Christianity no longer seems out of step with the national sentiment but rather the guiding principles of a man who practices what he preaches instead of mouthing the anti-life religiosity of some (our present born-again Commander in Chief comes to mind).
Jonathan Demme, whose documentary career is turning out to be almost as interesting as his narrative films, has made Man From Plains about President Carter. Primarily, the film follows the president on this past winter’s book tour conducted on behalf of Carter’s 21st book, Palestine: Peace Not Apartheid. The book proved highly controversial, mostly for the use of the word “apartheid” to describe the Israeli treatment of their Palestinian population. In addition to documenting the book tour, Demme also records the work the Nobel Peace Prize-winning former president performs for Habitat for Humanity, the Carter Center, and other organizations, as well as seeking out meetings with those who call choose to call him an anti-Semite and bigot. At the age of 81, Carter seems more vigorous than many people half his age. The film is a revealing portrait (which won three separate awards at the Venice Film Festival last week), and is greatly enhanced by the original music contributions of Austin treasure Alejandro Escovedo, whose background guitar work and arrangements help provide a connective through-line for the movie. Escovedo’s work as a rock & roller, orchestra conductor, and solo musician all coalesce in this project, and offer great promise for Demme’s next documentary project, which is reported to be a film about Escovedo that will be shot in Austin. Can’t wait. Catching Up With No Country for Old Men
The first film I attended was something I really wanted to see, but also an attempt to catch up with festival-goers who had already caught some of Toronto’s films at Cannes in May and Venice last month. No Country for Old Men by the Coen brothers is based on the novel by Cormac McCarthy and stars Tommy Lee Jones, Josh Brolin, Woody Harrelson, and Javier Bardem, whose demented appearance provides and use of oxygen-tank weaponry is merely a hint of the character’s way-off-the-charts psychopathology. At first glance, the pairing of McCarthy and the Coens might seem an unlikely match. But the combo ends up working beautifully. The film is a crime drama, as are so many of Joel and Ethan Coen’s efforts from Blood Simple to The Ladykillers. Although No Country’s tone doesn’t share the goofy vibe of works such as Raising Arizona or The Big Lebowski, one look at Bardem’s ‘do and fearless performance as a beyond-the-pale whackjob (literally) lets us know that the Coens are somewhere behind the scenes cracking up with laughter. The film’s violence has moments that fall into the ultra-violence territory, yet remain creative and memorably stunning. Jones delivers another immensely satisfying performance here, but the real surprise is Brolin, whose character is more the story’s protagonist than Jones’. Brolin commands our full attention as a leading man, and the film should be a breakthrough role for him. It’s through his character’s storyline that the Coens once again challenge us to follow the money trail. Although I haven’t read McCarthy’s novel, I assume that some of the story’s themes about the lapsed values of the past and the way America is changing for the worse are incorporated into Jones’ sheriff, who is on the trail of those following the money trail. No County for old Men kind of subsides precipitously after reaching a dramatic crescendo, which again I presume is a reflection of the novel. This unsatisfyingly rapid narrative closure, however, may just be a sign that No Country is one of those totally involving stories that one just hates to see end. 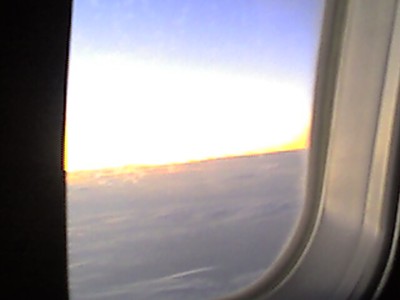 Fly the Friendly Skies
Yesterday I wrote that I believed I had been attending the Toronto Film Festival for around 12 years. Well now, in a roundabout way, I have proof that it's been at least 10. At the Austin airport, I thought all my problems were behind me after they finally found my reservation in their system. Ten minutes of fumbling behind the counter, plus a phone call to a head office somewhere, finally turned up my information. It looked like all systems were go until that horrible moment when I handed over my passport. Turns out it had expired three weeks ago. What followed was about 20 minutes of sheer panic – not to mention total embarrassment – on my part. Supervisors of supervisors were called in, some voodoo was eventually performed, and I was allowed to proceed. Made my gate with only a few minutes to spare. I was so ready for a drink (plus the lunch I planned to grab at the airport before all my time became consumed with figuring out how the hell I was going to get out of the country). But they had no liquor on this flight, not to mention food, which, as we all know, has become nonexistent in the friendly skies. Ultimately, the computer was the only being that cared about my expired passport. Nobody else I was required to show it to noticed or gave a damn. Don’t know what this portends for my re-entry to the U.S. Maybe I’ll just have to stay up here a few extra months while my new passport is being processed. Anyway, this incident is how I know that I have been coming here for more than 10 years. My first couple of times visiting Toronto, I entered on the basis of my Texas driver’s license and a smile before deciding it was time to re-apply for a passport. But times are different now; flying has become arduous and customs officials evidence even less sense of humor than before. I promise I’ll write about the movies soon, once I get a moment to catch my breath.

Off to the Races
"My bags are packed, I'm ready to go." Whoa – wrong song. That's not me. No matter how much I hum the tune, it does no good. I'm running around like an ADD nutjob trying to get everything done in order to head out of town to the Toronto International Film Festival. There are so many films opening here in Austin on a weekly basis that it's getting increasingly hard to see the forest through the trees anymore. It's not my imagination; the number of films released every year has been increasing of late – while the number of eyeballs in my head has remained the same and my supply of brain cells is ever-diminishing. And now it's off to the races to see how many of the 349 films from 55 countries playing in Toronto over the next 10 days (Sept. 6-15) I can catch. (Even if a body diligently attends five screenings a day, at most only a seventh of the offerings will have been sampled.) Yet it's a busman's holiday that I've come to love (I think I've been attending for the last 12 years). New for me this year, however, is that I've decided to join the 21st century, bite the technology bullet, and blog. So stay tuned, and I'll write more about the individual films, what I'm excited about seeing, what disappoints, and the heart-breaking choices that must be made on a daily basis (if I go see this, it means that I can't go see that). But first I've got to get my weary butt on that plane out of Austin.