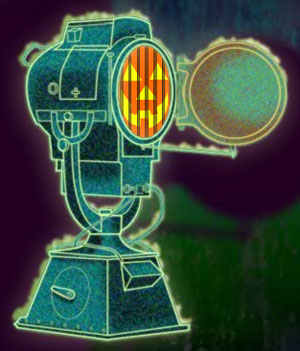 Goth Hard in a Funky Place
It's almost – but not quite – too late to herald the fourth anniversary of Gothtober.com, an online Halloween advent calendar with an animated treat behind each day's "door." Here's what someone (okay, I) said about it in 2003:

"Commandeered by one Juliana (JP) Parr and co-animated by a tag team of cheeky CalArts grads and other talented assemblage, the site isn't Goth in any black-lipstick sense, but it is full of irreverent grotesquerie in the spirit of the season."

It's still true. This year's theme is nautical, so do find time to sail away on a sea of monsters, mysteries, and messing with your head.

You're Joking, Right?
Word has it that the Deer Hunter-obsessed heckler at the John Milius/Oliver Stone discussion on war movies actually didn’t create the most uncomfortable moment experienced at an Austin Film Festival panel this weekend (though I for one can’t wait for my commemorative tee-shirt emblazoned with “What the fuck, Milius? What the fuck!”).

While I was too busy chasing Mr. Milius at the time (more on that soon), friends who attended the “Improv in Comedy” talk tell me things got pretty squirmy when Victor Fanucci, director of competition feature Beyond the Pale, arrived partway through as a late addition, and panelists Harris Goldberg, Larry Willmore, and moderator Warren Etheridge didn’t seem to know if he was for real and whether to let him join in. Meanwhile, the audience wondered whether they were witnessing some prankish illustration of improv comedy principles, like a guerilla Curb Your Enthusiasm moment curdling into something a little more Andy Dick ... and one of those moments that really help give a festival some spice.

Most likely an honest mistake or miscommunication heightened and prolonged into comedy of discomfort by the mere topic of the panel itself, the tale made the rounds as one of those events where “this isn’t funny” becomes the funniest thing to say. I don’t care to know whether it was real – whatever that means in this case – so my apologies to the panelists and fest organizers, but all should take some satisfaction in knowing that the legend made for better conversational lubricant at parties than even the 360 Vodka. 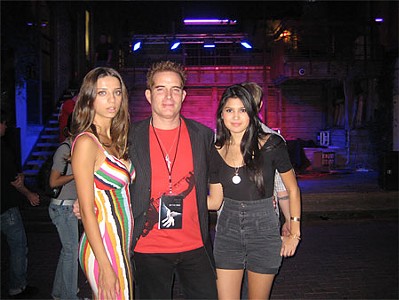 "On the Doll" DJ set from the Crystal Method for AFF
Couldn't get into The Walker? Us too, so we're heading over to Cedar Street Courtyard ASAP to check out the party for director Thomas Mignone's feature On the Doll, which, of course, we haven't seen yet but the word is good. Oddly (or maybe not – like I said, we haven't had a chance to screen the film), Las Vegas techno rockers The Crystal Method are spinning the party. Which begs the question, "Do Ken and Scott regret their choice of name now that no one in Arkansas has any teeth left?" We'll ask 'em, we promise, and we'll try to corner Mignone and hit him up for a screener while we're at it.

Wish us luck (and drink tickets).

Local teens on TV
Leslie Powell and Andres Ramirez can now be seen beyond the hallways of their local high schools, as they are now starring in Endurance: Fiji on the Discovery Kids Channel. 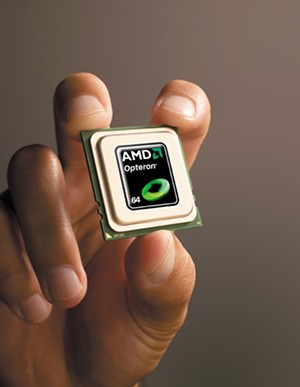 It Came From Barton Springs!
CEOs will tell you that when your corporation is running roughshod over a city’s delicate ecosystem, the best way to endear it to skeptical residents is to attach its name to as many local charities and cultural events as possible. Win their hearts and minds (the theory goes) and you can pretty much have your way with their drinking water and native-animal population.

After all, money is money, and most groups don’t care where money comes from so long as it comes. Take Advanced Micro Devices, the microprocessor-manufacturing giant that’s currently building a controversial 870,000-square-foot office park over Austin’s environmentally sensitive Barton Creek Watershed. To ensure their good name during the building process, AMD years ago enacted a clever policy of underwriting everything in Austin: concerts, environmental charities, libraries, hospitals, pie-eating contests, lemonade stands, junior-high-school debate teams, even the occasional newborn baby. This past month alone they sponsored two of Austin’s most beloved arts & entertainment events: Fantastic Fest, a film festival that tortures audiences with a week of ghoulish violence, gore, and emotional sadism; and the Austin City Limits festival, which tortures them with three days of live rock music.

I was fascinated by this whole corporate-art-sponsorship scheme, so last week I went and took in a few Fantastic Fest screenings at the Alamo Drafthouse South.

There Will Be Blood
The closing night film of Fantastic Fest was a real doozy: Paul Thomas Anderson's eagerly awaited Christmastime release There Will Be Blood. Despite the film not falling into the sci-fi, crime, and horror genres that populate the fest, the film is certifiably "fantastic." Anderson was present for the screening and brought along some of his key personnel (editor Dylan Tichenor, production designer Jack Fisk – who appeared to be accompanied by his wife Sissy Spacek, and others). Variety invited me to write a post about the screening on their Fest Central blog, so I won't repeat myself here, except to include one thing I neglected to mention: Anderson dedicates the film to Robert Altman, who died last year but not before completing A Prairie Home Companion, on which Anderson served as Altman's insurance-required backup director.

Juneteenth Parade in Austin 2021
MORE PHOTO GALLERIES >
THE MOST
VIEWED
COMMENTED
Texas Dems Storm the Capitol (Peacefully!) To Demand Voting Rights O'Rourke, House quorum-breakers rally thousands
21 Austin Rappers to Know in ’21 A hard-cut list of MCs proving the local hip-hop scene’s legitimacy
Will TxDOT’s Plans for Loop 360 Leave Cyclists and Pedestrians in the Dust? Bikin’ down the highway
Bands Are Practicing Again, but Does Austin Have Enough Rehearsal Space for Them? A love letter and state-of-affairs on the practice space scene