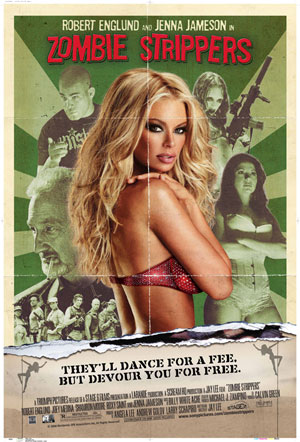 Dobie Solves Your Bare Wall Crisis
Dan Cofer at the Dobie Theater wants to save your walls from bare-assedness. They're gonna throw open the doors for their Dobie Poster Sale 2: Electric Bugaloo, in which they unload (for a price) tons of movie posters, plus other film-related goods and "various random stuff we might find lying around." The sale runs from noon to 6pm on Saturday, April 19. 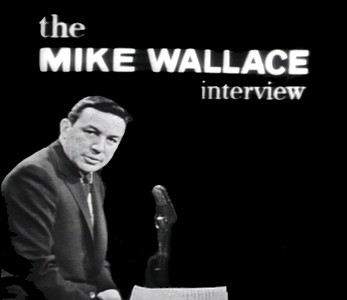 Mike Wallace: Before He Was a 60-Minute Man
Back in the early Sixties, when TV journalist Mike Wallace and the University of Texas' Harry Ransom Humanities Research Center were both young pups, Wallace donated to the HRC some 16mm kinescopes of the interview show that catapulted him to prominence: the nationally televised program, The Mike Wallace Interview. The HRC, along with the University's School of Information, have now digitized these unique programs and have made them available online. Although the show aired from 1957 to 1960, the HRC's collection is limited to 65 interviews on kinescope and audio tape from the years 1957-58. But what a panoply of guests Wallace attracted in that time!

The Brits Do Texas
Texas actor Ryan Rutledge sent word out that he had a lot of fun filming the upcoming season premiere of the BBC's Wire in the Blood. And he didn't have to cross the pond to do it. The gig was right here in central Texas. Rutledge plays Det. Amare Phelps in the two-hour show, Wire in the Blood: Prayer to the Bone, which premieres Sunday night on BBC America.

The Brits were in Austin last August filming the first four episodes of Wire's fifth season, putting a lot of local film folk to work. The series stars Robson Green as criminal psychologist Dr. Tony Hill – a more sullen, less obsessive compulsive version of Adrian Monk. Hill's ticks and neuroses are more internal, his oddities occasionally revealed in non sequiturs and pop culture references. Dr. Hill comes to the Lone Star State to testify as an expert witness at the trial of an Iraq War veteran who brutally killed his wife and children (he first met the soldier in the UK). Was it a case of Post-Traumatic Stress Disorder or pure, cold-blooded murder?

Besides the fun of recognizing familiar Austin and Central Texas landmarks, it's amusing to see Texas through the eyes of this BBC series: It's hot. Desperately hot (what fool persuaded them to film in August?). Texas is a place where straggly-haired men drink whiskey straight from the bottle (and raise rattlesnakes). Dust and sweat and old trucks are everywhere. And everything is large, thanks to elongated shots and wonky perspectives. A shot of the State Capitol looks like it's been pulled like a piece of taffy. I know things are supposed to be big in Texas, but come on now.

While in our lovely state, Hill helps "hunt down a missing girl, ritualistic killers, a serial rapist, and a serial rapist and a killer – or killers – with a mother fixation." All at the service of those "damn good yarns" Green says are at the root of each episode. 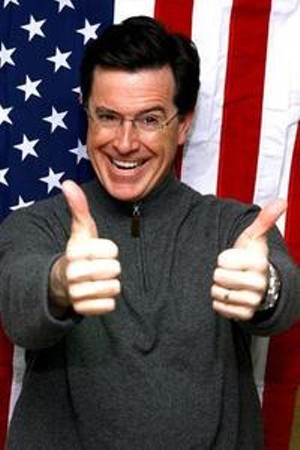 It's the Truthiness: Colbert Wins a Peabody
Satirist Stephen Colbert, host of the The Colbert Report, has been awarded the prestigious George Foster Peabody Award in the 67th Annual Peabody Awards competition. The award recognizes Colbert and the The Colbert Report for being "electronic media's sharpest satirists," according to a recent press announcement from Comedy Central, which carries the weeknight series.

"I proudly accept this award and begrudgingly forgive the Peabody Committee for taking three years to recognize greatness. On a personal note, I'd like to say that I've long been a fan of Mr. Peabody, as well as his boy Sherman," Colbert said.

The Colbert Report is the third Comedy Central program to receive the honor. Previous winners include Jon Stewart's" Indecision election-year coverage in 2000 and 2004, as well as a 2005 Peabody Award for the animated series South Park.

The Peabody Awards were announced by the University of Georgia's Henry W. Grady College of Journalism and Mass Communication, which has administered the Peabody Award program since its inception in 1940. The awards ceremony will take place in New York City on June 16. 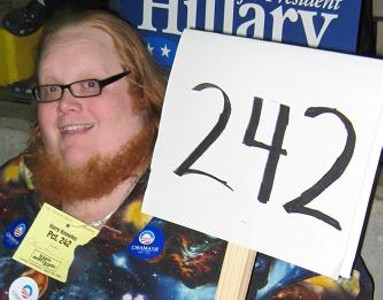 Obama Picks Up Big Celeb Endorsement?
There was a brush with local and Internet celebrity for anyone in attendance at the Travis County Democratic Party Convention on Saturday. Who was that sporting the handy wooden sign for Precinct 242 (up in North Austin between North Lamar and Burnet Road)? Why, none other than precinct delegate (and editor-in-chief/self-titled "Head Geek" of Austin-based Ain't It Cool News), the one and only Harry Knowles. Before you ask, he was covered in Obama stickers. 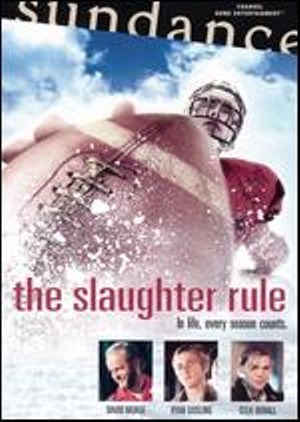 Screenwriters Tell All (Or Some of It, at Least – Okay, a Little Bit of It)
As part of UT's Undergraduate Writing Center's ongoing series about the writing process, they'll be hosting a screenwriting roundtable on April 4 at the Texas Union Theater from 5:15 to 6:30pm. Local funnyman Owen Egerton will moderate the panel titled From First Draft to First Run; dropping knowledge will be Austin scribes Lisa Boyd, Chris Mass, Alex Smith, and Yaphet Smith. Post-panel, Alex Smith's award-winning The Slaughter Rule (2002), starring a baby-faced Ryan Gosling, will screen. The event is free and open to the public. Just don't try to hand anybody your screenplay, okay? 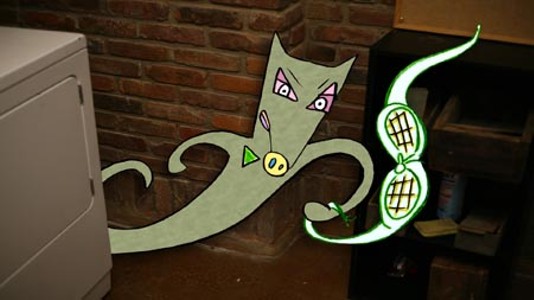 Good Eye, Good Eye
Two Austin fest films (past and future) have been selected to screen at the prestigious New Directors/New Films annual showcase ("dedicated to the discovery and support of emerging artists") at New York's Lincoln Center. South by Southwest 2008 Film alum Emily Hubley (who we profiled in our SXSW Film issue) has been selected for her live action/animated hybrid The Toe Tactic (Emily also designed this year's Film fest tote bag). And shortly after Lucía Puenzo's already much-celebrated XXY, an Argentine film about a 15-year-old hermaphrodite, screens at ND/NF, it'll make its way down to Texas to premiere at this year's Cine las Americas festival, which runs from April 16-24. Be sure to check out the Chronicle's April 11 issue for our Cine las Americas preview.

Free Money!
Did that get your attention?

Okay, so, yes, it's free, but they're not just handing it out like candy – you gotta earn it. "They" would be the Austin Film Society. They're now accepting applications for the 2008 Texas Filmmakers' Production Fund, AFS' long-running grant program. The press release says it all:

"This year, AFS will give out at least $100,000 to emerging film and video artists in Texas, in cash grants up to $25,000, as well as Kodak film stock and in-kind services from Seattle-based Alpha Cine Labs, a new sponsor of TFPF."

AFS Director of Artist Services Bryan Poyser – a former recipient, and no slouch in the moviemaking department himself – will be hosting free workshops all over the state in coming months. To find out if he'll be coming to your town soon, check out austinfilm.org. There, you can also find the answer to most any question, as well as download the 2008 application. 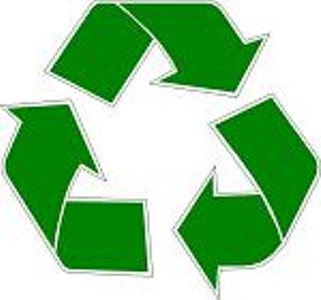 Cans on Film
If you thought modern cinema was just about recycling old ideas, think again: The Canners, a documentary about the lack of a consistent and coherent national policy on reusing old packaging, is looking for volunteers to discuss recycling in Texas. The film makers will be in Austin this week, and are looking for policy makers, professional recyclers, non-profit recycling programs, and people who put as much into the recycling bin as possible. "We will visit cities across the country to uncover why some states have deposit laws, while others don’t, talking with politicians and garbage anthropologists," said filmmaker Dave Rizzotto. "We will also explore such personal aspects as what motivates people to recycle through conversations with people living on the street, to cub-scout troops fundraising, to environmentalists."

See below the fold for full press release.