Award-season hopeful is putting Filipino cinema on the map 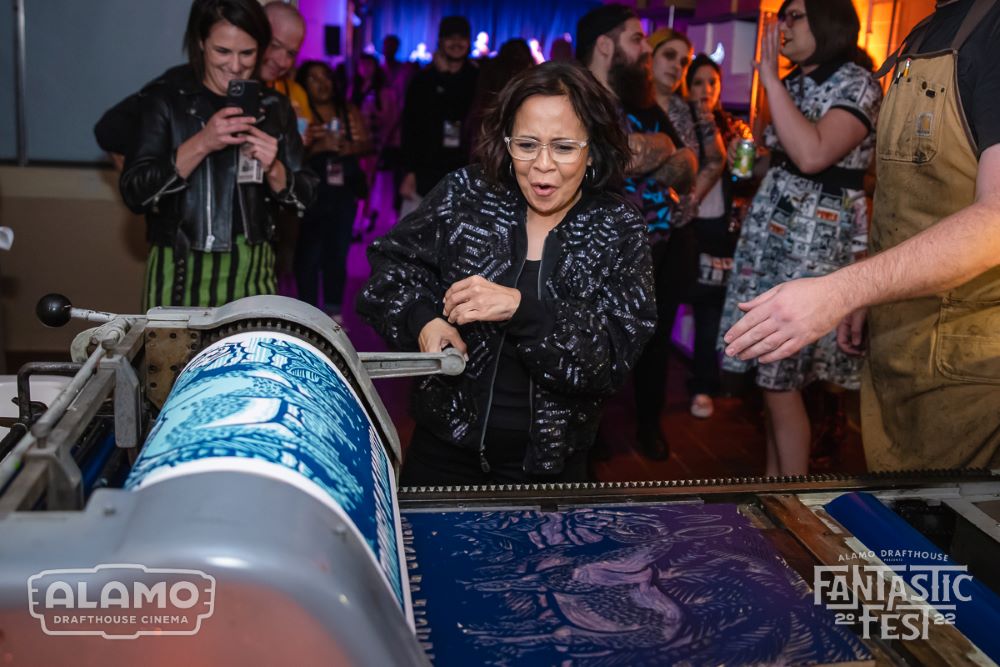 Dolly de Leon, star of Triangle of Sadness, tries her hand at poster printing, courtesy of the Press Room, at the Fantastic Fest 2022 closing night party (Photo by Heather Kennedy)

Attendees at Fantastic Fest’s closing night screening tonight got a surprise visitor: Dolly De Leon, the breakout star of the Cannes Palme D’Or winning Triangle of Sadness. "I'm so excited," she said before the screening. "I've heard so many stories. I feel like I'm going to a rock concert."

For her performance as Abigail, the cleaner on a swanky yacht filled with the worthless rich, she's already getting talked about as a potential Oscar nominee. Yet when she first auditioned for the part, back in 2018, “it was another job I knew I had to get.” She was a veteran of Filipino TV and stages, “but I wasn’t at a position where I could choose my roles.” However, she’d never done an international production, and this was an opportunity to work Force Majeure director Ruben Östlund, fresh off his Cannes Palmes D’or win for The Square, “and I’d been dying to do this kind of work.”

Her performance is not only putting the spotlight on her, but on the potential of the entire Filipino film industry - an industry that she sees as being in a particularly healthy place, post-pandemic. De Leon explained, "Before, especially in television, production was always after a quota. They had to finish 45 sequences in a day. Can you imagine?" (The opposite of notorious perfectionist Östlund, "because with Ruben it's 45 takes.") The result was an emphasis on quantity over quality, "and quality was left behind." However, now there's a strict 12-hour per day time limit on production, "so filmmakers can concentrate on quality. Even our soaps, our teleseries as we call them, are getting better."

As for independent cinema, the issue in the Philippines was not quality but budget. However, the Film Development Council of the Philippines has recently increased financial support for small productions "and they're really helping us a lot." De Leon said she sees the new wave of Filipino indie cinema will fill a gap left by big studio and network content that always plays it safe. She said, "We are so hungry and dying for stories that we can relate to, and stories that need to be heard, and can help us become a better society, and help us become better humans. The independent film scene is doing that."

Triangle of Sadness opens in Austin Oct. 14. Read more of our interview with Dolly de Leon in that week’s issue.