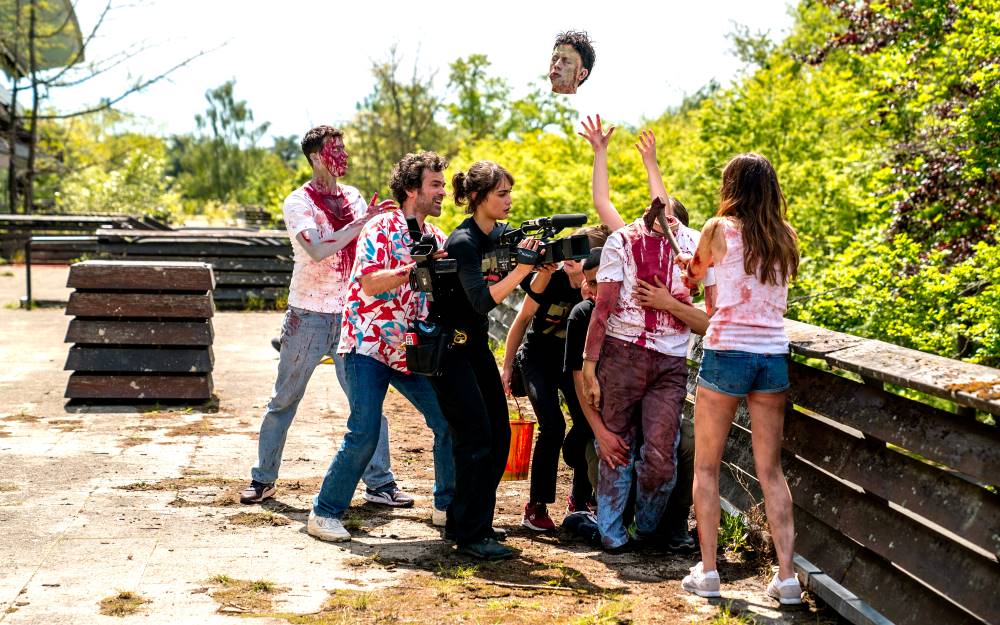 Take Shin'ichirô Ueda's delightful and innovative film-about-film comedy One Cut of the Dead, a smash at Fantastic Fest 2018. It's a film that initially requires great patience, as it starts as a terrible single-take zombie horror, which is revealed eventually to be a film within the film; the real story is about the happy but hapless indie filmmaking family who somehow, through complete misadventure, manage to pull off the seemingly impossible.

Equally impossible seems to be the intention of Michel Hazanavicius (director of the Oscar-winning The Artist) to somehow capture the spirit of the original. With Final Cut, he manages a pretty good emulation, even if he can't quite weave the same magical spell.

In part, it's because of the conception: Final Cut (or, to give it its original French title, Coupez!) isn't simply a remake. It's a remake about a remake: within the story, the show that the adorable misfits of moviedom botched together has become a minor cult success, and so a new French streaming platform has hired small-time director Remi (Romain Duris) to recreate the original for French TV.

However, as with the original, that's not something viewers realize until the second act. What they see first is the bad zombie flick he pulls together, then how the project came to be, and then a behind-the-scenes farce about everything that goes wrong on-set in real time, but they still make a movie.

So Final Cut is both a remake and quasi-sequel, pulling over lots of the same elements, either as plot nods or in-universe echoes: there's Remi's supportive wife, Nadia (Bérénice Bejo), who steers clear of sets for a reason; his film purist daughter, Romy (Simone Hazanavicius): and even a small cameo by Yoshiko Takehara, who starred in the original. The costumes are the same, as somehow are the character names (a joke that Hazanavicius does explain). It's One Cut of the Dead but not, often both too loyal to the letter of this idiosyncratic wonder and too distant from the source's tone.

Most of what is best about Final Cut is what it lovingly mimics from One Cut of the Dead, and what hinders it most is what it cannot quite capture - the undefinable joy of doing your best. It's more of a satire, sparkling and funny, and while Hazanavicius executes that well, and maintains some of the heart, it's not quite got that absolute rush of joy.

Not that all of Hazanavicius's additions add nothing, and there's real fun in Jean-Pascal Zadi's turn as Fatih, the long-suffering but enthusiastic composer tasked with trying to create a real-time score. There's a recurrent joke with Rémi that pushes the film closer into a Living in Oblivion-style filmmaking parody, and that's where Hazanavicius feels most comfortable. Yet, like the original, it's heart is in the right place, and that may well be enough for this smart remake.