Into the shadowy mind of the man that created Hellboy 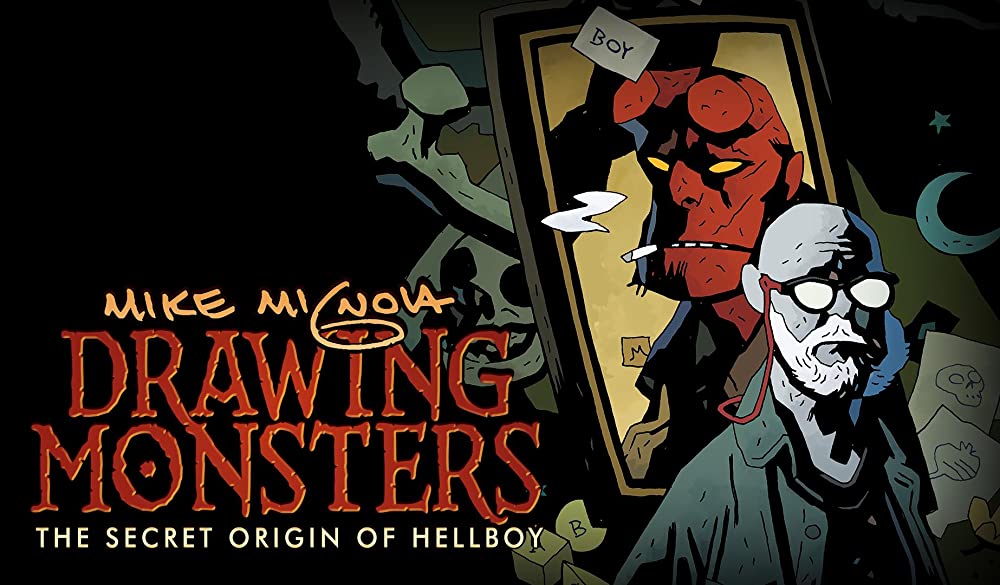 If my house ever collapses, it will be because of the stress placed on the structure by what I can only call the Mike Mignola wing.

Shelf after shelf of trade paperbacks, with the little Dark Horse press chess piece logo in the spine, color coded for the individual series and stories. Witchfinder. Abe Sapien. BPRD. Vampire. Lobster Johnson. And, of course, Hellboy. All the work of Mike Mignola, the artist and writer behind what is now known as the Mignolaverse, built around the blue-collar Prince of Hell himself, Hellboy - and arguably more importantly, loving husband to Christine, to whom it feels like he gets a chance to give the public recognition she clearly deserves.

In Mike Mignola: Drawing Monsters, documentarians Jim Demonakos and Kevin Konrad Hanna delve into the life, influences, and impact of the expressionist master of shadows and negative space. There is a signature minimalism to his creativity, so distinct even if he's only writing for someone else it's still distinctly Mignola-esque.

Not that he was that complete an artist to begin with: no one is. Drawing Monsters gets into his years as an inker for hire, with suggestions of his style that finally solidified after spending a year with Jack Kirby's characters for DC's Cosmic Odyssey. This time was "the missing ingredient in turning me into whatever the fuck I am now," as the salty-tongued Mignola puts it. He is, after all, single-minded - he had to be to create his own world at a level that he has - and that can come out as cantankerous (as several of the talking heads to whom he is closest dance around). But there's also the complexity of his relationship with Guillermo del Toro's Hellboy films: and how, for Mignola, these movies that creatively got away from him have become the best advert for his work ever. At the same time, as del Toro and stars Ron Perlman and Doug Jones say, what Mignola allowed them to do gave them the careers they have today.

Few documentaries on the creative process manage to strike that fine line between two artists who find themselves at loggerheads, but Making Monsters gets to the heart of Mignola and del Toro's disagreements. The resolution is a fascinating one, based - possibly in hindsight and maturity - on understanding what needed to happen in the process of adaptation. As the old saying goes, just because someone films a book, that doesn't make the book go away ...

Throughout there is an implied undercurrent of fear, a conviction that he had to change to avoid failure. This was a boy born and raised in sunny Berkeley but with a pure British and New England affinity for fog and granite, ghosts and two-fisted tough guys. Raised by his stoic carpenter father (a clear influence on Hellboy himself) after his mother died, he fell into comicdom because he didn't quite know what else to do, moving to New York for the dream of working for Marvel but then fleeing back to Cali, taking on inking gigs and making stylistic breakthroughs because he was afraid of being fired, and finally creating Hellboy because he was convinced that, some day, publishers would tire of his style. It was even fear of writing that pushed him to recruit comic legend John Byrne to script the original Hellboy six issue mini series, Seed of Destruction.

And the irony is that an artist in motion for so much of his career, constantly fleeing the specter of failure has, spent over two decades working on what he calls "the Hellboy machine" (a term he clearly dislikes less than the Mignolaverse).

Yet the quite reasonable fixation on Hellboy means the opening act - centering on Mignola's pre-Bureau of Paranormal Research and Defense days - suffers from some revisionist history. He wasn't quite on the cusp of being fired through the '80s and '90s that the story implies: rather than being the kind of artist you stick on a monthly title, he was being given high-profile prestige one-shots like Doctor Strange/Doctor Doom: Triumph and Torment, the Topps adaptation of Francis Ford Coppola's Bram Stoker's Dracula, and the era-defining Batman: Gotham by Gaslight. He may not have had the spinner rack recognizability of a John Romita Jr. or his old friend Art Adams, but by the early nineties he was one of those artists that made collectors completists, even if he was just drawing a fill-in issue on a title they wouldn't normally touch. As superfans like Neil Gaiman and Patton Oswalt explain, and contemporaries within the business point out, Mignola isn't simply part of the comic industry: he's created something unique and off to one side, without ever really trying. Sometimes the good (if slightly grumpy) guys really do win.

But most of all Mike Mignola: Drawing Monsters is about a man who always saw himself as an outsider - a guy who couldn't fit in, even in the avowedly exiled community of comic creators - and ended up creating his own field of gravity.