Lovecraft and Rest Stops: Rebekah McKendry Takes to the Road for Glorious

Inside the pandemic roots of the new cosmic horror comedy Ryan Kwanten finds something nasty in the bathroom in Glorious, streaming on Shudder starting Aug. 18 (Image courtesy of Shudder)

H.P. Lovecraft. Master of the uncanny. Godfather of cosmic horror. And funny. After all, as filmmaker and film historian Rebekah McKendry noted, At the Mountains of Madness – one of his most famous books – features mutant penguins.

The slippery tentacles of the creator of Cthulhu are all over McKendry’s new film, Glorious, arriving on horror streaming site Shudder on Aug. 18. It's a pre-apocalyptic tale of a guy on a road trip (Ryan Kwanten) who ends up in a conversation with Ghatanothoa, an unseen ancient abomination (voiced by J.K. Simmons), through a hole drilled in the wall of a rest stop bathroom.

Sound ridiculous? For Lovecraft fan McKendry, that absurdity is part of what attracts her to the author’s work. “It’s cosmos and underwater blended together with these otherworldly creatures that are unimaginable, and the mental processes and insanity. But at the same time a lot of it is really silly.”

“Lovecraftian” has become a shorthand for “slimy and bizarre” in horror circles, but it’s rare that filmmakers have been able to get away with injecting the comedy aspect. The exception was probably Stuart Gordon, who injected sardonic squishy laughter into Re-Animator (mainly because the producers were barely paying attention), but most stories influenced by Lovecraft's work have leaned heavier on the mind-warping terror. That’s not what McKendry wanted from Glorious, even though its mix of high-brow, low-brow, and irreverence about “some pretty damn sensitive material” could make it a hard movie to pitch. When asked who it was aimed at, she said, “I kept saying, ‘It’s for best friends I haven’t met yet. These are people who have the same sensibilities as me.’”

“We find [absurdism] just as much in Troma as we do in the more heady, arty stuff.”– Rebekah McKendry
When explaining it in film terms to potential investors, she invoked “the tonality of Repo Man, where it is this mix of low-brow and high-brow philosophy in the least likely place.” However, there was another influence: absurdist theatre. “We mentioned [Eugène] Ionesco and Sartre, anything that we could to bring in the absurdity of it, and our theatrical background.”

Absurdist theatre been a repeated theme in McKendry’s life and work – and it’s even how she met her husband, Glorious co-writer David Ian McKendry. They were both attending Virginia Tech, “which did not have a very big theatre department at the time, and most of what they did was these weird little black box shows where a person is going to tap a drum for an hour while someone else irons, and somehow that represents the plight of the coal worker. … We both loved and found absolute hilarity in this.” Later, she noted, they moved into absurdist sketch comedy and they bonded over Monty Python’s Flying Circus, The Young Ones, and The Mighty Boosh. Their first film together, All the Creatures Were Stirring, “which was made on a pittance, was set in an absurdist black box theatre, and when we shopped [Glorious] I literally called it 'Waiting for Godot in a bathroom.’”

But the whole point of absurdist theatre is that it’s not snobby. It’s always been about creating an accessible way to discuss strange concepts, using Chaplin pratfalls to discuss Left Bank philosophy. “We find it just as much in Troma as we do in the more heady, arty stuff,” McKendry said.

Talk about low-brow: Glorious was born, as are so many great ideas, in the bathroom. Or, rather, of the bathroom. Like so many people during the pandemic, McKendry and her family took to the highways and byways of America. And anyone who took a road trip during the pandemic became very aware that the network of rest stops – some surprisingly welcoming and well-designed, others just a breeze block box by the side of the road – became a part of the long-haul ritual … 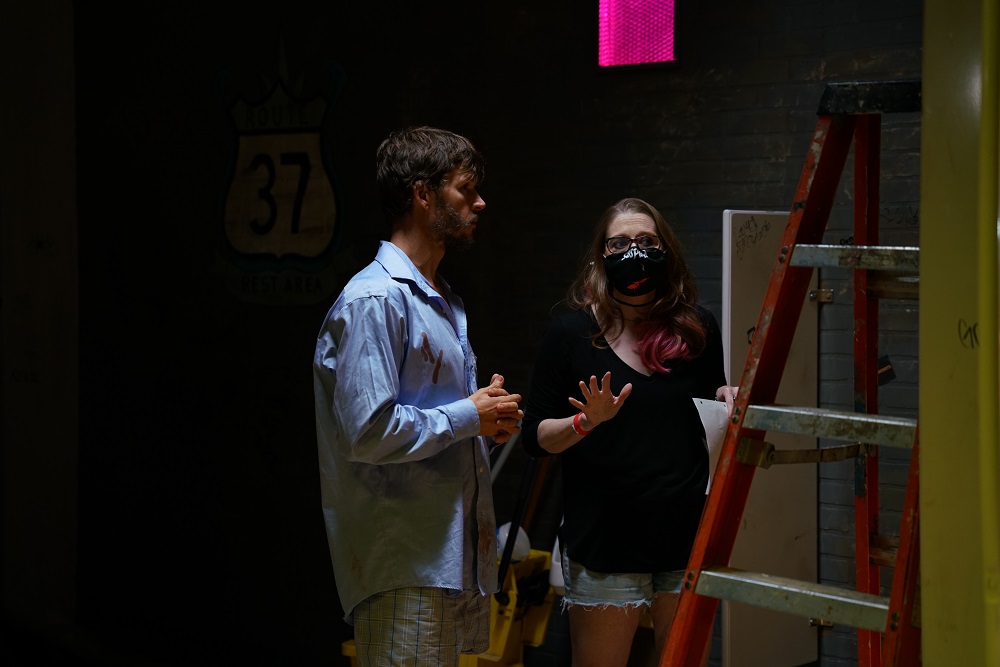 Austin Chronicle: It would be easy to tell a much darker or cheesier version of this story. Was the absurdism always there in the script?

Rebekah McKendry: It was there to a degree. I must say that the first pass that I read was far grimier, it got far darker, it was brutal. It was still a guy in a bathroom with someone he thinks is a god, but we were like, “Let’s see where we can push this.”

The biggest thing that came as we moved forward with it is that my husband is very into mythology. So it was bringing in the mythos, bringing in the philosophy, and bringing a lot of what we were going through during the pandemic. There is so much catharsis in this. There is so much existentialism, so much “What the fuck am I doing with my life that brought me to this point?” Because we were working on this in about the second or third month of the pandemic, right about when “I’m baking banana bread and cutting my own hair, ha ha” was starting to wear off and we were starting to get the “I can’t get toilet paper and I haven’t showered in three days” point of the pandemic, where you’re going, “Why am I not eating ice cream for dinner?”

That is the point we had reached when we were working on it, and I called it my mid-pandemic crisis because right as we were working on this I scraped together a little bit of money, sold part of my DVD collection, I bought an RV, and we toured the country for six months. That’s where a chunk of this was written, that’s where we shopped it around, and that was my big existential crisis.

Here’s the wild thing. We still have it, and we still take it back out. We just got back on Sunday. We went back all the way across country with it. We developed a love of travel, and now if I’m in one place for more than a couple of weeks I get antsy.

AC: Six months in an RV, you must have experienced some fascinating rest stops.

RM: That was a whole thing. Occasionally we’d stop to use rest stops, just to stretch our legs, move around. Because we got greenlit while we were traveling the country, we were in pre-production while we were traveling the country, I started looking at every rest stop that we went into as an escape room. Thinking, “If I was locked into this bathroom, how would I escape it?” With that, a lot of things were brought into the script. “What if there’s a dropped ceiling? Can he go through that?”

AC: And a lot of people take rest stops for granted as a breeze block square in the middle of nowhere, and some of them are fantastic. 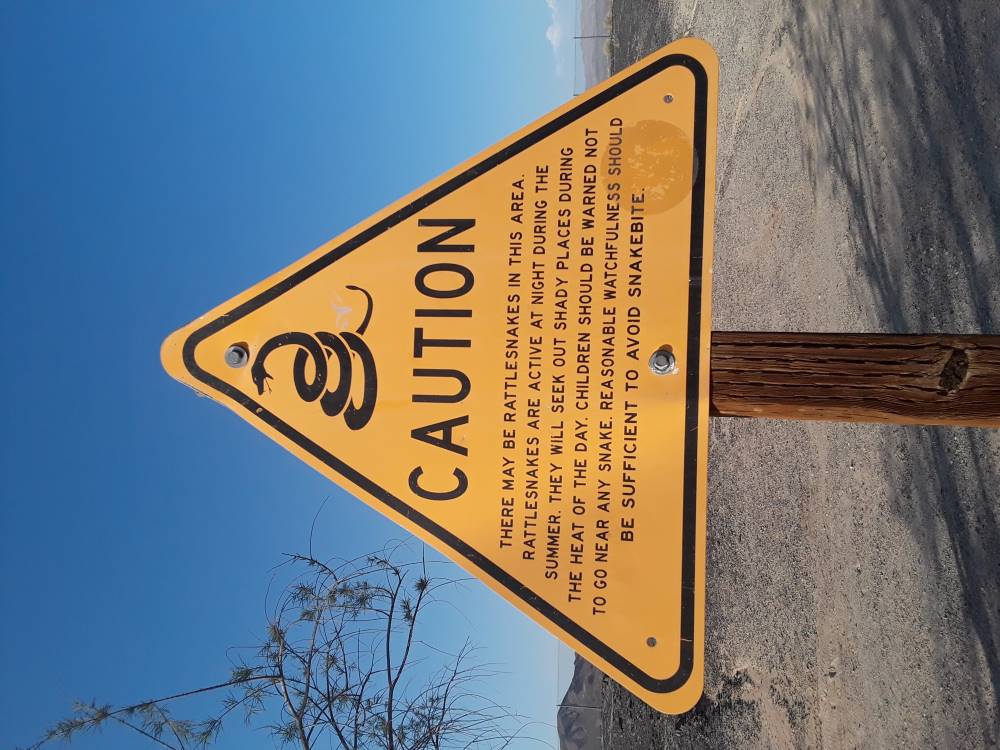 A snake warning sign: one of the adventures you'll find when stopping at America's rest stops (although still not quite as dangerous as what you'll find in the bathroom in Rebekah McKendry's Glorious) (Photo by Richard Whittaker)
AC: I’ve driven up to Missouri a few times, and the Conway rest stop is all themed after Route 66, with all the picnic tables made to look like 1950s garages and stores, and there are the covered teepee stands in Oklahoma.

RM: That was an issue as we were looking, because we knew we needed an actual rest stop to shoot the exteriors. We were in Jackson, Mississippi, and I’m like, “OK, I’ll just find us a rest stop in Jackson,” and we quickly discovered that all the Jackson rest stops are made to look like Mississippi antebellum architecture. They’ve got these massive colonial columns, and they’ve got staircases, and they’re all white and wooden with shutters. Very much made to look like that traditional super Southern architecture. So I’m looking at these and I’m going, “I can’t use this. This looks like a house!”

So we ended, the one that we used is this super rural one in this area about an hour outside of Jackson called Natchez Trace. It’s this state park stretch, and it’s in the middle of nowhere. Nobody had reception, there was no lights, so as soon as we unplugged our generators it was nothing – pitch black – which was fun to load up the trucks. It was a feat to find one as blank as I wanted it.

When we originally wrote the script, it was not for Mississippi. We wrote it for the desert. One of my favorite conventions that I go to a lot is Phoenix Fan Fusion. On the drive in between L.A. and Phoenix because it’s all this 1950s architecture, but at the same time they’ve got this desolation to them because it’s the desert and there’s nothing around. I’d even built in a sign that said, “Beware of scorpions,” because they have these signs in every single one of them …

AC: I’ve seen them! Also the “Beware of snakes” ones as well.

RM: Yes! Beware of snakes and scorpions. I love that, I love that element, and that was the original conceit in the script that we were going to use the exterior of one of these desert rest stops, and then we found a place in Mississippi and went, “It works, it’s just as rural,” and I loved that the trees made it even more isolated than the desert.

AC: And you have to use them because you have no idea where the next one is.

RM: Some of them say that. “Last rest stop for 90 minutes.” There’s a little one at this place called Quartzsite that we always stop [at], where it’s a rest area and it’s got a gem store next door, and it’s got a Patton museum with tanks out front. It’s just the weirdest little roadside collection – and it’s got a really good ice cream stand, too.

Glorious slithers onto Shudder on Aug. 18.