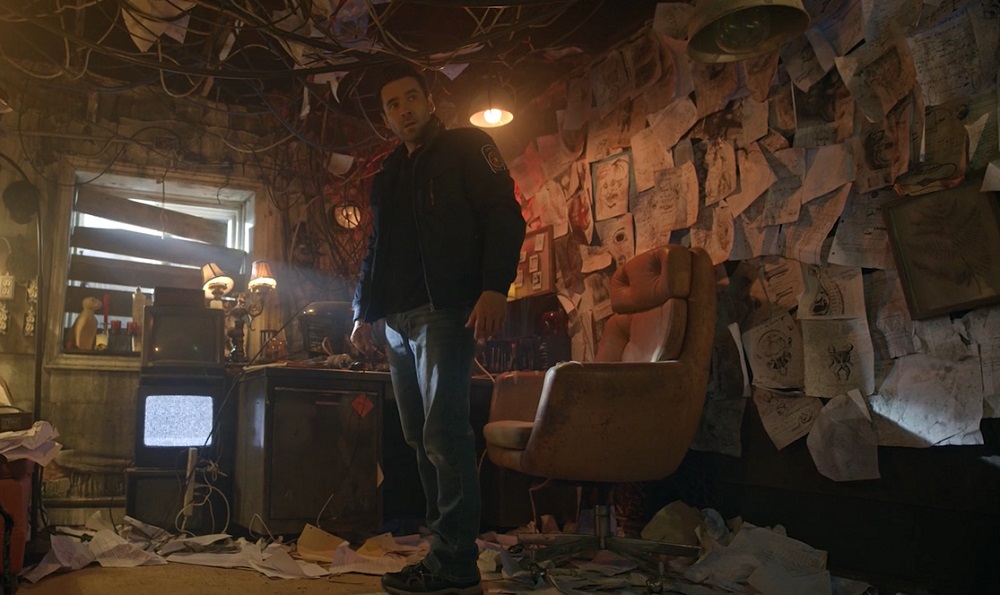 The key to great cosmic horror is the thing-ness of it. The misshapenness, the idea that impossible symmetries and forms are capable of intruding, or being invited, into our realm. The Breach offers exactly that, and delivers a shuddering, grotesque, and terrifying glimpse into the Lovecraftian abyss.

But whereas H.P. Lovecraft pulled the brilliant trick of relying on the impossibility of describing the indescribable, The Breach delivers a grisly sight in its opening moments. A body, but only just, mutilated in impossible fashion so that it takes a while to recognize as even human, never mind that it's most of the corpse of an eminent scientist.

The first feature in a decade from Rue Morgue founding editor and publisher Rodrigo Gudiño proves that he hasn't lost the heart-clenching grasp on tension that he showed in cult favorite The Last Will and Testament of Rosalind Leigh. As the trio of local coroner Jacob Redgrave (Wesley French), local sheriff John Hawkins (Allan Hawco), and boat captain Meg Fulbright (Emily Alatalo) navigate the upper Canadian reaches of the Porcupine River, the romantic tensions of being the three only eligible individuals in their hick town – one that Hawkins is eager to flee – are soon subsumed by a search for a missing girl and the discovery of an impossible house. Eeriness pervades every prematurely aged floorboard, and there's a perpetual sense that the trio is always one step behind something squishy, with too many limbs. It's not that the menace will catch them, it's that they will, inevitably, catch up with it.

That's dread. That's the fear of the inevitable that seeps through every suppurating wound, and after the opening brutal outburst Gudiño pulls back before ratcheting the tension back up, slowly, deliberately, until a final-act descent into madness. It's not a shift in tone, but an ebb and flow enacted as much through Jim Goodall's production design and Joshua Turpin's art direction as it is through the makeup and creature design of Chris Cooper and Daniel Baker. Even as the gore ramps up, it's actually a simple and deeply disturbing visual effect involving a blackboard that may be the most sickening moment. It's truly the moment of no return, and it's done without grandiosity, making it more impactful.

With novelist Nick Cutter adapting his own book (alongside veteran TV writer Ian Weir), the script lets the trio work under the shadow of the encroaching menace as the search for answers increasingly becomes a survival horror. Meanwhile, the exposition is handled via a cameo by Rush's Alex Lifeson as a cosmic conspiracy theorist warning about the muddy lines between science and sorcery. (He's not the only rock royalty here: Guns N' Roses guitarist Slash provides the score, an eerie and atonal funeral march into the interspatial void.) Those asides, away from the cabin, give hints and context to the increasingly terrifying and grisly fate that awaits the investigators. The Breach brings doom, and does so with patient, disturbing grace – until it rips the world right open. Just like a good cosmic horror should.

The Breach screened as part of the 2022 Fantasia International Film Festival.