Full Collapse: Rebecca Hall on Madness and Abuse in Resurrection

The Night House star on her latest horrifying role Every story has an emotion that gives it motion. According to star Rebecca Hall, Resurrection is powered by "this one woman's internal reserve of rage and anxiety that is ever-present, and vast." Yet it may not be enough to offset the resurgent evil in her character's life.

In the Sundance-selected psychological horror (which also made the prestigious 2019 Black List of the best unproduced scripts) Hall plays Margaret, a professional woman seemingly in complete control of her life. That is, until David (Tim Roth), her ex, appears back in her life and everything tumbles apart as she is confronted by the smiling monster that unraveled her grasp on reality.

Austin Chronicle: Between this and The Night House you're on a run with very fractured characters, and here the moment of fracture is very early in the script. Normally, that kind of moment is a third-act reveal.

Rebecca Hall: It is one of the things that really appealed to me about it, because human emotions aren't particularly linear in the sense that they build to a climax. Often, when you're portraying a character or you're mapping a story or you're making a film, there's this sense that you have to start at one point and then ramp up, ramp up, ramp up. There's something really interesting about going from zero to everything, and then seeing where you can go after that.

It felt to me almost mythical, or like a Greek tragedy. A mythological story has this kind of outlandish component, and her character feels like the ultimate lioness of revenge and retribution and anxiety and terror, all at once. So the first break, which happens relatively early on, is in real-world terms the biggest imaginable. She has a full panic attack, and then it was really about, how do you build on it from there? … As an actor, I found all that very appealing, and certainly very challenging.

AC: Her experience is something that people I know who have gone through very intense trauma have experienced. When something happens that reminds them, it just takes them straight back. All the work they've done, everything they think has healed, it's all gone. The accuracy of your performance makes it a hard watch.

RH: This is unwatchable!

AC: It's the weird, ultimate tribute.

RH: [Laughs] Kinda. "Rebecca Hall, not interested in acting in films that people can watch." 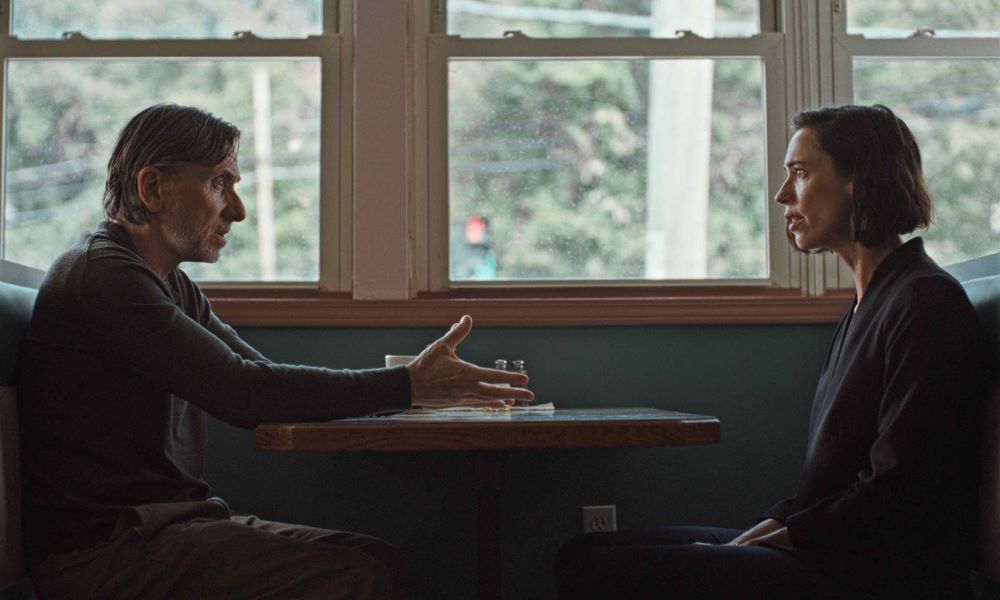 Tim Roth and Rebecca Hall in Resurrection, in cinemas now

AC: And then there's the dance with Tim Roth. You can feel the acting partnership clicking at every level. So you want every scene to end so Margaret can get away from David, but then you want to watch you two working together.

RH: It really worked. I think a lot of British actors share a similar sensibility, which is difficult to pinpoint. I don't know where it comes from, whether it's a tradition of theatre, but there is a sort of real tradition in the more British craft of acting of it being fun. It's difficult to explain, because I'm not in any way belittling, and not saying that they're not taking it very seriously when it's happening, but there is a sense that I really appreciate of keeping it an environment where you can play. Like a playground for children – because it is a bit like that, let's be honest. The more that you feel able to play, and the looser you are, and the freer you are, the more capable you are of going to the dark places because you feel supported by a kind of energy that is other than that.

We were definitely simpatico about this one, about our approaches, and I think it really helped enormously.

AC: I think it goes back to the Sixties. In part it's that American acting embraced that part of the Method that says it has to be hard work, whereas British theatre adopted these playful elements.

RH: And there are good and bad parts about both disciplines. The bad version of that British thing is that it goes so far in that direction that they go, "Aw, we don't care about any of this," and it gets lazy, honestly. But equally the extreme version of that in the American tradition is that you take yourself so seriously that you don't see the wood for the trees. You're not actually serving the film, you're just serving whatever emotions you're personally going through, which can be problematic.

AC: That's summed up in Official Competition, where Antonio Banderas' character always wants it to be meaningful and is deeply Method, while the actor played by Oscar Martínez is just like, "I just turn up and do my lines."

RH: It's the famous story about Dustin Hoffman and Lawrence Olivier, where Olivier tells him, "Try acting."

AC: Did [writer/director Andrew Semans] every explain to you why he went with two British actors?

RH: He didn't. This is my fault. He employed me to be, as everyone employs me to be, American – and, well, I'm half-American, I live here. Whenever I'm employed here, it's always with an expectation that I'm going to be American, in spite of how I sound when the camera isn't rolling.

I actually asked him: I said, "Look, I never get to do anything in my own voice, and there's actually no reason why this character can't be British. If anything, it's actually helpful to the plot, this idea that she's running away from something. If all of her links are in another country, it kind of makes sense." He um'd and ah'd about it, and went, "Well, I've always imagined that she was American," but then he was like, "No, you're right."

And also, to be totally selfish here, I had enough to handle with this character, I don't want to be thinking about the accent. I'd like to let go of one element and just concentrate on something else. He agreed, and when Tim got cast then of course it would make sense that they would both be British.

Resurrection is in theaters now. Read our review and find showtimes here.