The filmmaker traces how industrial music informed his new work 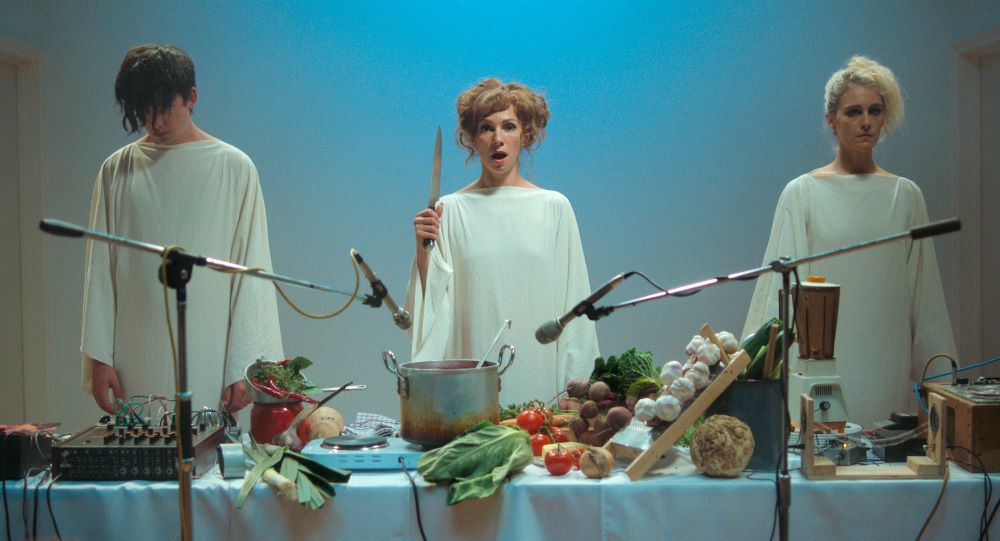 Filmmaker Peter Strickland wouldn't call himself a fan of seminal British art goths Joy Division, "but I appreciated – pardon the pun – the atmosphere."

However, his appreciation and understanding of the band changed when he read Unknown Pleasures: Inside Joy Division, bassist Peter Hooks' history of life inside the very grimy tour van. "All that icy elegance and solemnness went out the window with all these awful, scatological frat boy jokes."

The perils of band life are the instigating incident in Flux Gourmet, Strickland's elaborate new comedy about a performance art ensemble/avant-garde cookery outfit trapped with each other in endless rehearsals, constant bickering about direction and inspiration, sexual politics, and arguments about equipment. It's something Strickland knows a lot about: the music-food thing, that is, having been part of British industrial outfit the Sonic Catering Band, who used the sound of cooking as part of their mix and released albums more as menus rather than with track listings (they even list the recipes that they cooked on their website). 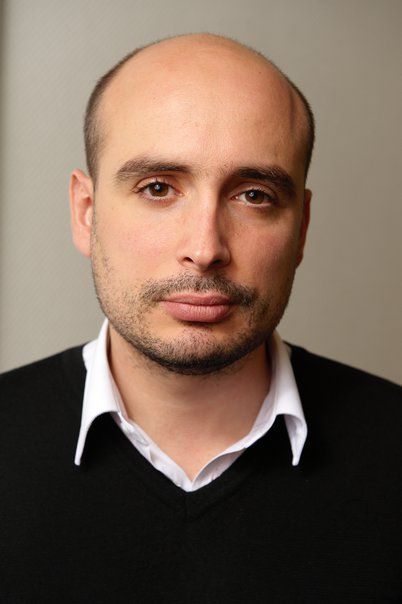 Peter Strickland
They were part of the British industrial scene. And that's not American industrial, with a few loops over metal; or Euro-industrial, all electronic snare drums over danceable beats. This was experimental, deeply political, transgressive, Dadaist, defying definitions of tunes and instruments. This was Test Department, Throbbing Gristle, Nurse With Wound …

"Ah!" Strickland chirps up in recognition, adding American controversialists like Butthole Surfers and Robert Ashley to the list. Those bands were a direct influence on the film, with one scene drawing directly from multiple listenings to Throbbing Gristle's 1977 album, The Second Annual Report, and Nurse With Wound's 1982 single "I Was No Longer His Dominant."

It's a pivotal moment, one that hearkens back to some of the most transgressive performances of the scene (as the old joke went, if you didn't get hepatitis at a Throbbing Gristle show, were you really there?). In it, band leader Elle di Elle (Strickland's long-time collaborator Fatma Mohamed) joyously pushes boundaries at a performance. The scene was amazing, Strickland said, but the soundtrack didn't match her achievement. "We couldn't make it intense, even though she was very much on fire in that scene. We tried so much with the sound to add layer upon layer upon layer, and the more we put on the less impact it had." So he walked away from the scene for a while, and started considering the bands who inspired him and how they would sample "found voices from radio phone-ins or whatever – usually very disturbing stuff."

So he turned to German vocal performer Britta Gartner (best known to film audiences as one of the flying nuns in Harmony Korine's Mister Lonely), who added a recitation as "this German domina." Her vocals were then digitally corrupted and aged and became part of the sound of Flux Gourmet.

Austin Chronicle: There's actually a great scene in here about knowing when something works, and when it goes wrong. It's an insight into how, when you're doing this kind of art, you know what you're trying to get to, but if you don't achieve it the audience may not know.

Peter Strickland: I think if you sit on the front row of these things, you know what has gone well or badly just from the facial expressions. The sound doesn't indicate that. If you're in the band, it's life or death, but if you're in the audience sometimes you can't tell the difference.

AC: It's part of the question of intent, and you deal with structure and hierarchy in creativity. In film, a director isn't expected to be able to execute every task on set, but the idea of a band visionary – people will still look at them and go, 'What do they do?' It's the Warhol thing of people still pushing back against the idea of someone who doesn't use the paintbrush themselves.

PS: There's a whole debate. If they split up, who gets to continue it? The one with the technical know-how, or the one who knows nothing about flanges but has the ideas? I'm not there to answer that, but it's an age-old debate within bands – even about royalties.

AC: There's clearly a connecting line from Sonic Catering to what you're doing here, but where did the idea to tap into that part of your creative life for the concept here come from?

PS: Maybe it was a desire to sell the records we never sold, I'm not sure.

Joanna Hogg [director of The Souvenir], we do very different films, but there's this thing where you're mining your own past. But within that I felt that a space opened up to explore something I was very interested in that I wasn't aware of as having been done in film, which is the idea of food as a threat, as a poison. The idea of a stomach being something you can't control, and it led to this idea of something that is usually done as a skit or a prank in film, of farting. If we give it a different context, can we turn it into something solemn?

It all kind of linked up, weirdly. There was never this plan as I was writing. A lot of those bands we were mentioning were very focused on taboo and shock value [and] it seemed connected to this character who's having to give stool samples. I saw taboo as a way to open up this conversation about these very private, hidden, embarrassing issues that maybe shouldn't be private. I think there's a way to open up these discussions without being vulgar.

AC: There's this interesting juxtaposition for people who know the early industrial scene, because you present the performances in Flux Gourmet with a sense of grace. It's not Genesis P-Orridge giving himself an enema on stage.

PS: Or in America you have the GG Allin stuff. But I just felt sorry for him. He was a mess. There wasn't much thought behind what he was doing. There definitely was a confrontational aspect, and it's very kind of you to say it was graceful. There's an element of, 'We do these things and see what happens afterwards.'

In terms of the visual aesthetic, I was thinking of the Viennese Actionists – Kurt Kren, Otto Mühl, Hermann Nitsch – a very toned-down version of those people, because they were dealing with slaughter and so on. But it's a tricky line, because obviously to me I don't find the film shocking. There are thousands of films that are more shocking than this one, and you're dealing with a band that deals in shock value, deals in taboo-breaking, but you don't necessarily want to be taboo-busting yourself. You want to liberate certain subjects, of course, but it was never my intention to be the most notorious film out there. So it's a tricky line to follow when you're dealing with a character who wants to be known for confrontational work, and what is interesting about [Elle di Elle] is the way she appropriates other people's suffering for her own art.

AC: That's this idea of the artist as manipulator. I was talking to Penélope Cruz about Official Competition, and most of the film is a director being mercilessly abusive to her actors during rehearsal. So in extreme art, where everyone is there consensually, what does that mean for what counts as transgression within that environment?

PS: If you've read Cosey Fanni Tutti's book [Art Sex Music], the revelations there are similar to what you're describing. Fatma's character, I would call her Machiavellian. She's not a nice character, but it's a tricky one because you could argue she's the closest one to me [and] it would almost be like an act of narcissism to try and make her likable. It was much more interesting to make her unlikable.

AC: On the other side of the creative process here: Are you any good at cooking?

PS: I'm not bad. I can't bake. I'm not going to change anyone's life. I can do lentils, hummus, I can do all sorts of pasta bakes and so on. But I would say I'm intermediate.

Flux Gourmet is in theatres and available on VOD now. It will screen at the Alamo Drafthouse South Lamar on July 10 as part Fantastic Fest Presents.