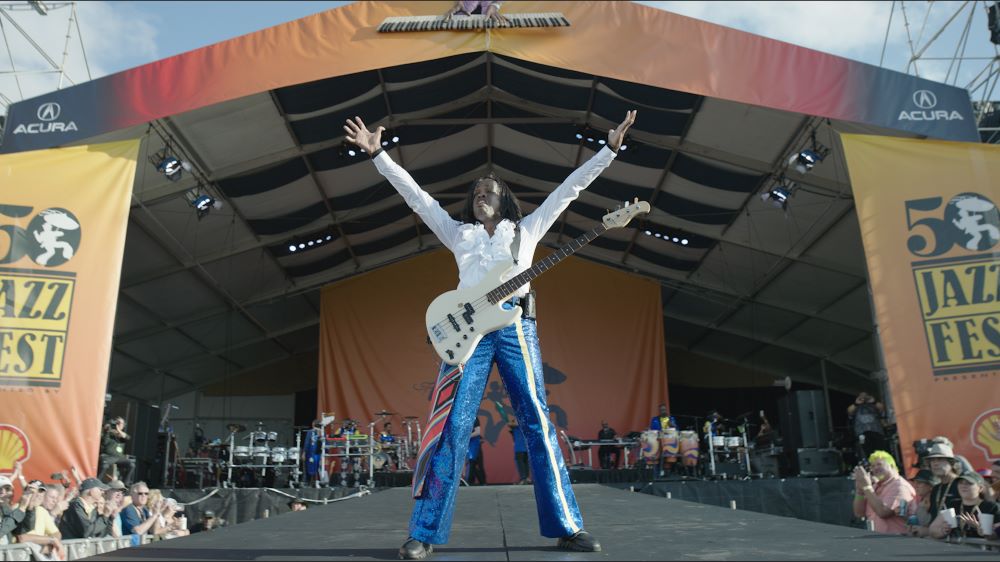 “A great festival experience that can’t be matched.” That’s the judgment of the late, legendary George Wein, who died last September while the New Orleans music festival he helped found remained on pandemic hiatus.

Wein, producer of the Newport Jazz Festival, had first been consulted in the early Sixties, when Jim Crow made an integrated event impossible. After a decade of false starts, the first New Orleans Jazz & Heritage Festival opened in 1970, and in 2019 celebrated its 50th Anniversary.

That occasion is the subject of Jazz Fest: A New Orleans Story, a vivid documentary which earns its subtitle as a story of its host city. Early on, Ellis Marsalis Jr. (a 2020 pandemic casualty) helped recruit local musicians, and he notes that the eclectic festival was never “only” about jazz. An effective portrait might consist simply of a selected 50-year lineup: New Orleans natives Mahalia Jackson and Irma “Soul Queen” Thomas, Marsalis and his four musician sons (in what might have been their last group performance), Herbie Hancock, Rockin’ Dopsie, Al Green, Aaron Neville, Trombone Shorty … and on, and on, and on …

Longtime festival producer Quint Davis (executive producer of the film with Jimmy Buffett) provides contextual commentary, and film directors Frank Marshall and Ryan Suffern select generously from archival footage. Buffett credits New Orleans with his own maturation (“I’m a child of the Mardi Gras”) and delivers a stirring, scene-specific rendition of “You Can’t Always Get What You Want.” Another celebrant, Katy Perry, accompanies the Gospel Soul Children on “Oh Happy Day” (the choir in their church robes, Perry in a skimpy spacesuit), merging seamlessly into Perry’s “Firework.” Festivals, Austin visitors can testify, create magical juxtapositions, and the leaps from New Orleans, nationwide across the cornucopia of Louisiana foods, and inevitably to Africa (“roots of the roots”), meld a gumbo of cultural flavors.

Jazz Fest features “7,000 musicians on 14 stages over 8 days,” so the generous selection here is just a sample. One moving sequence recounts the 2006 festival, a few battered months after Hurricane Katrina. Ben Jaffe of Preservation Hall recalls the “rebuild from below zero,” and the film memorializes Bruce Springsteen’s inspirational repurposing of his hymn for Asbury Park, “My City of Ruins.”

“You can’t do it but you have to do it,” says Davis of that year’s festival. Filmgoers can pay personal homage to the revival … as they plan their April visit to the Birthplace of Jazz.