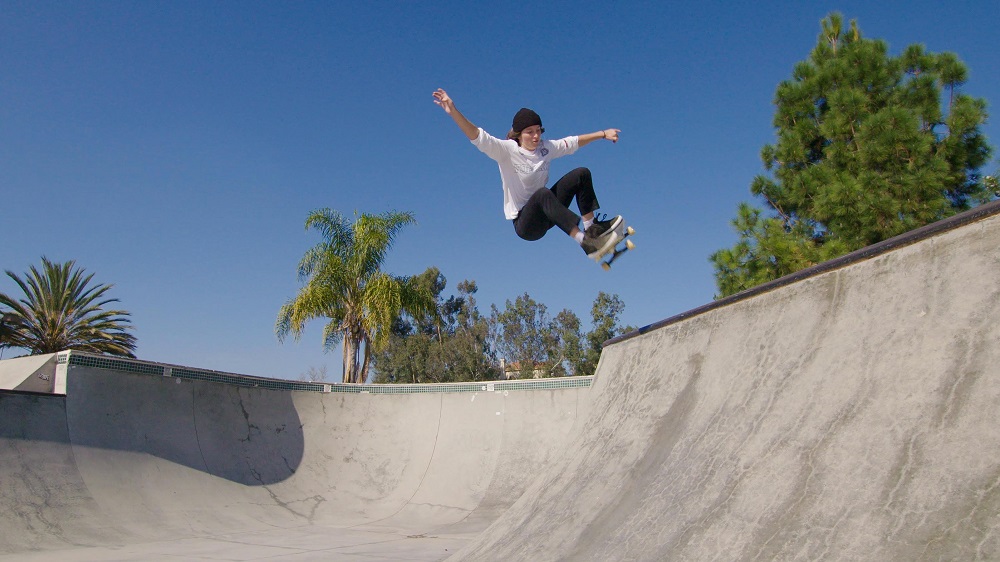 The phrase “skate like a girl” was something tossed around while growing up in the 90s as an insult, a jape to put down friends while skating around, doing kickflips out on the corners of their block.

The sport of skateboarding has drastically changed now. As seen in the opening of Skate Dreams, a chapter in Seattle has taken back the term, titling their organization and competition “Skate Like a Girl.” It’s here Cambodian skater “Tin” Kouv Chansangva takes the top prize, a pioneer in her country, where she’s recognized as the first female skater.

Jessica Edwards’ documentary on the rise of the female skate stars of today is vibrant, an edgy tapestry of hard-working athletes whose success has encouraged inclusivity in the sport. There’s a common thread in women-lead sports documentaries that try too hard to cheer on what is depicted as the impossible, but Skate Dreams keeps a level head that feels like a weight lifted. It manages to be both inspiring yet accessible, a documentary that’s celebrating the growth of females who have picked up a skateboard despite deterrents.

Nicole Hause’s journey through the documentary is particularly poignant – from competing to qualify for the 2020 Tokyo Olympic Games to her accident and recontextualization of what matters most when it comes to her career. Hause and roommate Nora Vasconcellos have a candid conversation at a picnic table in their backyard, over weird social media DMs and their futures with the sport. In contrast to Rachelle Vinberg’s journey with sponsorship on skate-focused TV show Betty, Hause finds happiness and a new wave of innovation with her Nike sponsorship, a positive outlook on brand collaborations that ten years ago would have been blasted. These are moments that are often looked at with defeat – who wouldn’t be gutted by losing a chance to compete at the Olympics? However, Edwards’ vision doesn’t discount the beauty in self-discovery and pivoting goals, which is why these women are so lauded by their fans.

Skate Dreams is a bright, sweet, and badass film – a kaleidoscope picture of incredible and talented skateboarders who are devoted to their totally wicked passion. The documentary ends with Chansangva coaching young girls to not give up, young skater girls in the making. Someone better tell the boys the future of skateboarding is female.