From Stage to Page to Screen: Inside the Script of West Side Story

Tony Kushner explains the process of adapting a classic 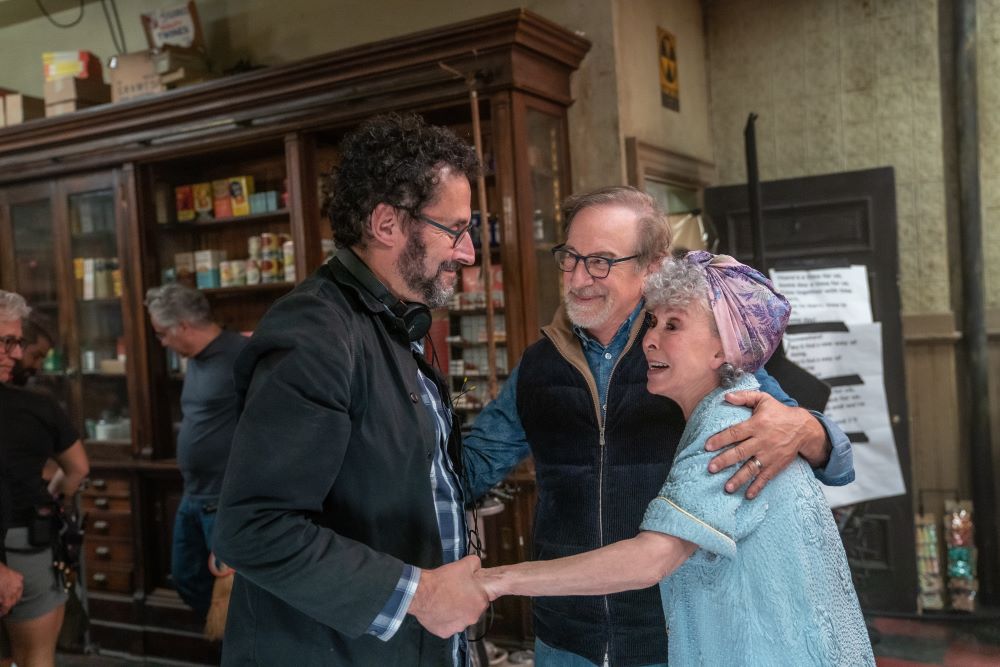 Tony Kushner, Steven Spielberg, and Rita Moreno on the set of West Side Story (Image Courtesy of 20th Century Films)

Adaptations call to Tony Kusnher. Even though he made his reputation through his revolutionary and epic two-part AIDS-era theatrical landmark, Angels in America, throughout his career he has repeatedly dipped into the works of others. "If you love a text," he said, "there's no way to get more intimate with it than to adapt it."

Theatre, by its nature, is a place for adaptations and translations to flourish, and so Kushner has taken on new versions of classic plays (including two Brechts, The Good Person of Szechuan and Mother Courage and her Children), lesser-known texts (such as The Illusion, his revisting of Pierre Corneille's L'illusion Comique), and literary adaptations (his 1991 play of Ariel Dorfman's Widows, cowritten with the author).

It's a particular set of challenges, often specific to the text and the moment. As a case study, he cited his 2006 translation and production of Mother Courage at New York's Public Theater. "There's a great British translation by John Willett and Ralph Manheim that's very very actable and playable, but it's done in a kind of Lancastrian, Mancunian, 'nowt'-kinda dialect, and it's useless in America. There was no good American-English version of Mother Courage, and I really wanted Meryl Streep to do it, so I told her that if she'd do it I would do the translation, so we did."

He's also no stranger to cinematic conversions, having adapted George Jonas's Vengeance into Munich and Doris Kearns Goodwin's Team of Rivals into Lincoln for Steven Spielberg. So when the Schindler's List director approached him about writing the script for a new film version of 1957 Broadway phenomeon West Side Story, he went in like it was any other project, unaware that there was going to be backlash at the very idea of a second film version after the Oscar-winning 1961 adaptation, directed by Robert Wise and Jerome Robbins. "I didn't know how universal the skepticism was, and I'm glad I didn't know about it when we were writing it."

Lesson learned: nothing gets up the gander of film culture more than the concept of a remake. It wasn't until the reviews came out that he grasped the urge to discount this version sight-unseen. He recalled, "[Even] very favorable ones were beginning with some version of 'I couldn't imagine that this would have anything to add, or that this would work, or I couldn't imagine why they were doing this - but now I see why.'"

The reality is that there is no sacrosanct singular version of West Side Story. Even the stage version itself is not immutable: for example, in his 2009 revival original writer Arthur Laurents himself worked with Lin-Manuel Miranda for a bilingual translation. There were also major structural and story differences between the play and the 1961 film. Even though it was only released four years after the original musical shook up Broadway forever, scriptwriter Ernest Lehman made radical changes to Laurents' book, adding characters, changing the order of songs, even swapping musical numbers between parts. Kushner's theory was that Robbins wanted to prove that the musical, which had opened to tepid reviews and lost the Tony to The Music Man, was a masterpiece and that every change was made to re-enforce that point. Case in point: the addition of an overture. In the stage version, he said, "It just started with the 'dah-dah-DUM' and then right into prologue. If you don't have an overture, the audience doesn't get to hear the songs, the melodies. But before you hear 'Some Enchanted Evening' in South Pacific, you've heard it two times before in the overture. There was nothing to get the audience ready to hear these incredible melodies." 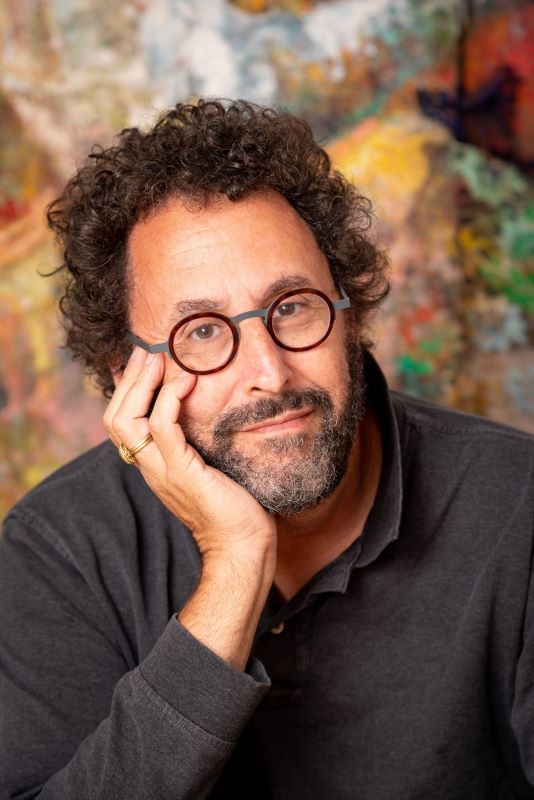 Tony Kushner, scriptwriter of the 2021 version of West Side Story (Photo by Angela C Brown)
However, his main decisions were to go back to the original version, such as moving "Gee, Officer Krupke" back from the second act (where Lehman had moved it, to get all the comedy into the first half of the film). If he took anything solid from the Robbins and Wise version, it was license to make some of his own changes, even with immediately identifiable songs. He explained, "In the stage version, 'Somewhere' is sung by a fantasy character in a dream ballet. So I felt like I had the right to take it away from Tony and Maria, who grabbed it for the first movie, and give it to our new character, Valentina, for Rita Morena to sing."

It's not like Kushner's the first person to do a fresh adaptation of a classic work for the stage that has been filmed before. "There are one or two versions of Hamlet," he deadpanned, "and one of them is very good." Plus, a little secret that not many people may know. West Side Story is itself a loose reworking of Romeo and Juliet. "I'm sure some people went, 'why make a musical when the play is so great?'"

Still, what appealed to Kushner and Spielberg was that the original musical is a landmark and a classic, and so they didn't want to mess with what attracted them in the first place. However, they also had somewhat unique approval to their choices, with "great encouragement" from the families and estates of Laurents, Robbins, and composer Leonard Bernstein, and most especially from Stephen Sondheim. The lyricist of the original musical was present during filming and the recording process, and even made a few tweaks to the lyrics himself. Kushner recalled, "I think he would have made bigger changes if I had let him."

If anything, the Kushner/Spielberg version is closer to what opened in 1957 at the Winter Garden Theatre than the first film versions: but Kushner's role was not merely to be a stenographer. He first went back to the original cast recording, listening to it over and over again, and rereading Laurents' book, "thinking about things that had been changed for the [1961] movie that we might want to change back." During this process he found "ideas, very exciting character attributes and so on, that were latent and hinted at in the musical and the '61 film, but for whatever reason weren't really made explicit in any way." The more he read, he added, "the more confident I felt that there was a lot of room for growing ideas of our own, without in any way betraying or violating or intruding on in any alien way into the original intentions."

“I think [Stephen Sondheim] would have made bigger changes if I had let him.” - Tony Kushner
That confidence was re-enforced by the writing process, which Kushner described as "in dialogue" with the earlier versions. "Beat by beat, as I came to Steven with new ideas and a new structure, new ideas about the characters, some major changes about the characters, we became more and more excited about the possibilities [and] the original film began to feel a little less daunting."

The process allowed him to really get deep into the original work - a passion of his ("Sometimes when I'm reading a book and I love it, I'll just type out a passage from the book, just to have the feeling of writing the words down.") This also meant tackling one of his long-running problems with the story, right back to Romeo and Juliet. "I don't believe people really fall in love at first sight. I think people have intense feelings of lust for each other at first sight, and then that may - if they're lucky or unlucky - turn into an incredible feeling of love or deep attachment. But I can't understand how it can happen, how you can really fall in love with someone you have seen for an instant at a dance at a gym."

So, as always, he went back to the source material. In this case, Romeo and Juliet, and more specifically Franco Zeffirelli's 1968 version. "The balcony scene in that movie is phenomenal, and you realize that Romeo and Juliet they don't fall in love with each other at first sight. They tease each other, and they're obviously hot for each other when they meet at the party, and then the balcony scene they realize they're as amazing as they first seem, and they start to really play with themes of being madly in love. It's a kind of play acting, and then it doesn't really turn into love until they're together again."

With that context, he was able to go back to the scripts and make those scenes work - only to discover that Sondheim had already hidden all that wisdom in plain sight, in the words to "Tonight." Kushner said, "That he writes words like, 'Today, the world was just an address/A place for me to live in/No better than all right.' In later years, he would sneer at those lyrics, but there's something incredibly daring about having these two teenagers singing one of the great melodies of all time, and he wrote lyrics showing them straining to fill the space that Bernstein has created - which is what you do when first fall in love. You try to live up to all the fantasies of what being in love should be, and some part of you is always aware you're faking it a little bit, and you're hoping the other person doesn't notice it. And then something changes, and you're not falling in love anymore. You're in love."

West Side Story is in cinemas now. Read our review and find showtimes here.