Getting Behind The Tender Bar With Lily Rabe and Tye Sheridan

The challenges of authenticity (and George Clooney's acting class) 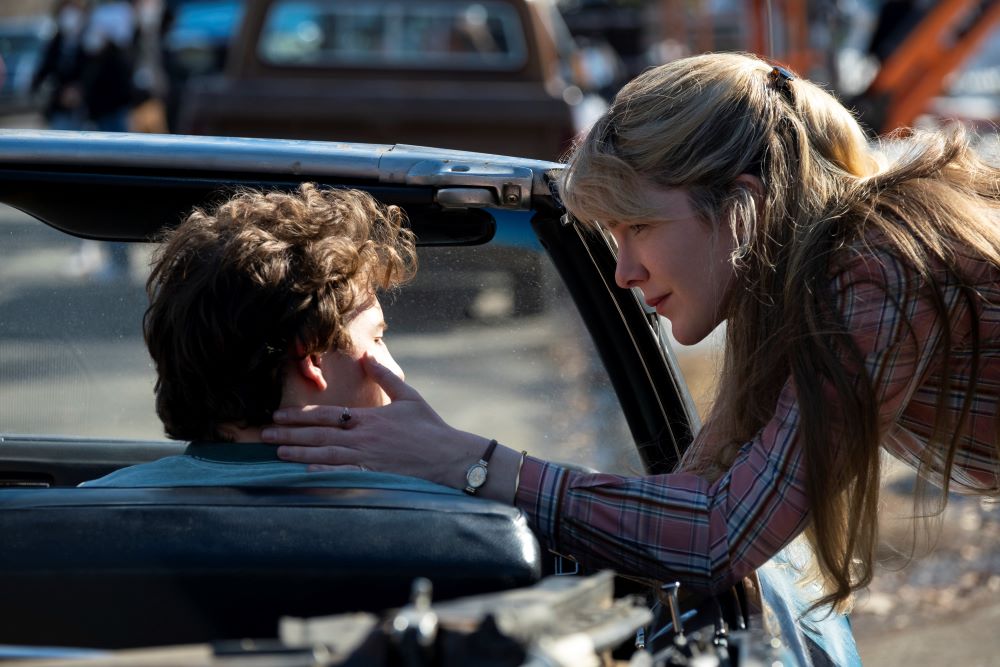 Accuracy in a biopic can come down to the smallest recognizable detail. Like the brown cord jacket that aspiring writer J.R. (Tye Sheridan) wears - the uniform of the freelance reporter, somewhere between casual and businesslike. "Jenny Eagan," said star Lily Rabe, giving tribute to the film's costume designer. "She's amazing."

Period family drama The Tender Bar, which arrived on Amazon Prime today, is filled with those kind of tiny details, both of set dressing and emotional veracity. Directed by George Clooney, the film adapts J.R. Moehringer's best-selling memoir about growing up in blue collar Manhasset, NY. Native Texan Sheridan Mud, Joe) plays the collegebound author looking back at his childhood and extended family, nurtured by his mother, Dorothy (Rabe), and given direction through the beneficial influence of his bartender uncle, Charlie. "There's incredible generosity in this family, and in this story," said Rabe.

Austin Chronicle: When you're approaching parts like J.R. and Dorothy, you've got three levels: there's the script, there's the memoir, and then there are the real people. How did you approach constructing your version of these characters?

Tye Sheridan: I think it depends. Are you playing Michael Jordan, or are you playing J.R., who maybe people know his work. He's obviously not as much of a public figure. And I think there are different levels, as well, to who you're portraying that might differ the approach. But I think you're not wrong at all at how it can be kind of complicated when you have the real people, and then the memoir and whatever material it's based on, and then you have the screenplay. I think you can carry along the essence, where it derives from and where it's sourced from, but at the end of the day the screenplay is what you have to be focused on, because that is the version of the story you are telling.

At some point, you almost have to cut ties with the source material, but that's just my thinking. I did Ready Player One, which is an adaptation of Ernie Cline's book, and that was confusing because I kept going back and reading the book, and the screenplay was changing a lot. I got so confused. I can't remember what's happening in the book, what's happening in the script. I just remember thinking back on that when we were doing and going, "Man, I wanna put the book down because I don't want to get too confused. I just want to hone in on the script."

“I’m an absolute research nerd. I love, before I start something, to pack my bag with absolutely everything I can mine from the universe. ... Of course in the playing of it and the making of it, some of those things, they evaporate, and some of them are there in your hand.” – Lily Rabe
Lily Rabe: I don't have an absolute clear cut feeling about it. I had a run of playing people recently who are based on real-life people, and none of them remarkably famous - some not at all. So it's not like playing Elvis Presley. Not that I'd get to do that.

TS: I don't know. You might make a good Elvis.

LR: But there is that feeling of responsibility that can be simultaneously exhilarating and terrifying. [Moehringer] dedicated the book to his mother, and her story is so incredibly personal in the book and also in the adaptation. ... And I'm an absolute research nerd. I love, before I start something, to pack my bag with absolutely everything I can mine from the universe, whether it's a real person or not. I just always want to have that all, but then of course in the playing of it and the making of it, some of those things, they evaporate, and some of them are there in your hand.

The wonderful thing about playing someone like this who is a real person but isn't someone in the public eye, someone that people are coming in with a sense of, is that I did feel these wonderful gifts that I wouldn't have necessarily have expected to come back to me from reading the book. Suddenly, in a moment with Tye or a moment with [ Daniel Ranieri as the young J.R.], there it was, the scene from the book, or this moment from the book. This description of how she held her hand or her head, or looked at him, and what that felt like for him. SO having all that there, without a plan to use it in a specific way, always feels for me as a way to have a good balance.

TS: It's comforting. To have it in your back pocket.

LR: You just feel it.

AC: Portraying any real-life person carries those complexities, but Dorothy only died in 2019. Did that place any different obligation on you, with it only being two years?

LR: What I felt was a tremendous amount of responsibility for was the love that [J.R.] had for his mother. I would have felt that with her being alive or not because, for him, he is the only child of a single mother. It's like that counterpart of his, and so certainly the fact that she isn't here, maybe I felt it a little bit more, but I would have felt it no matter what because it's his mother.

AC: And you two are almost in different stories. Dorothy's is longitudinal across two very distinct points in her life and you're working with two actors playing J.R., while you're only responsible for half of those scenes. How did you each approach that, creating emotional and performance continuity for the characters and the relationship?

TS: That was my biggest concern about the film. Going into it, even reading it, the way the narrative unfolds chronologically, and you're with the younger version of J.R. halfway through the film, and then you're with the older version of J.R. I thought, "Well, is the audience going to meld these two characters together, these two actors together, in their minds as the same person, and are they going to feel a sense of loss when young J.R. comes off the screen and we get into the older J.R.'s story?" That's the one thing you've got to achieve in this movie.

LR: It just felt incredibly seamless. I always felt that I was never loving Daniel without loving Tye, and I was never loving Tye without loving Daniel. I felt them both, always, with me in the scene. I never had a moment when I thought, "Oh, we have this, but I did this for this. There's a missing piece." I never felt that. In fact, it just felt like an embarrassment of riches in terms of this totally fulfilled son.

I remember, when they told me they wanted me to play the part, the first thing I asked was, "Do I get to do the whole thing?" Because I really wanted to. I felt so strongly about having to play the whole piece of her. George Clooney on the set of The Tender Bar with Daniel Ranieri. (Courtesy of Claire Folger/ © 2021 Amazon Content Services LLC)

AC: George Clooney directed this: Does it make a difference having a director who comes from an acting background?

TS: Absolutely. It's a totally different dynamic. I've never worked with an actor/director before so I was really excited, and I was a fan of George's films as well - I think he's an excellent filmmaker - so I was excited to know what it would feel like.

The way that it's different is that he directs from two perspectives. One understanding what you're doing as an actor and how you work through a scene from the your perspective, and then he's got his director's lens as well.

Sometimes a director will tell you, "Hey, can you try to be a bit more cool, or a little bit like this or a little bit like that," and they'll try to explain how they want you to be in a certain moment. Whereas George is like, "Look, here's an old actor trick. Right before you say your line, just look down, look up." Something like that, simple little things - the oldest trick in the book. There was a lot of that, but you also feel like he's kind of on your level. He gets it. He's really engaged. He's really seeing what you're doing. You're almost acting the scene out together.

LR: He's an actor who loves acting and he loves moviemaking. He has a great sense of joy, George, and because he's made so many movies as an actor he knows what it is to be on a set that is joyless versus one that is joyful, and you have an incredible amount of freedom and trust from your director. He gives that to his actors.

The Tender Bar is on Amazon Prime now. Read our review here.