The New Moneyball in National Champions 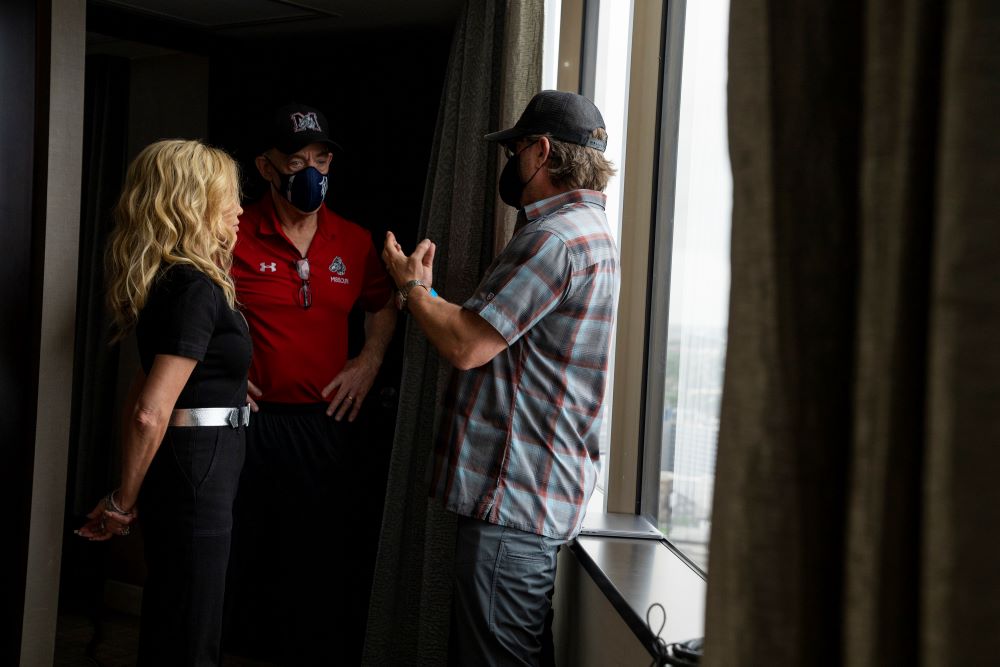 Ric Roman Waugh admits that there’s a degree of humor in calling his NCAA drama National Champions (now on VOD) a sports drama “because there's no sports in it."

The Austin-based director didn't get to enjoy the film's theatrical kickoff in person earlier this month because he was, as he put it, "in Saudi Arabia, blowing things up." He was there for the delayed production of his third collaboration with Gerard Butler (after Angel Has Fallen and Greenland), action-thriller Kandahar: but if his big budget adventure hadn't been pushed back, then National Champions would never have happened.

The shoot was originally scheduled for early 2021, "but when the Delta variant swept through Europe and the UK we had to shut down to get to the borders." That’s when producer Basil Iwanyk approached him with a proposal. "He said, 'We had this script that we weren't going to show you because you weren't going to be available, but we need to make it this year.' I read it overnight, and I just flipped over it."

The script was Adam Mervis’ adaptation of his own stage play about a pair of college seniors orchestrating a players’ strike on the eve of the NCAA national championship game. Their negotiating position: if the NCAA and colleges can pay coaches and executives millions of dollars every year, then they can pay the players who make that money.

As a sports fan, the script spoke to Waugh, but not because of any plays on the field. Instead, he saw in its dynamics everything that appeals to him about a great game. “It's the underdog story. It's the big twist. It's the nail-biter ending you never saw coming. It's the person who picks themselves up off the proverbial ground to go and win the game. I wanted the movie to play like that."

“These kids are out there on this field, and there’s money being made. OK, you don’t want to pay them, but you can’t even provide medical insurance or a health plan?”
But there was another, more personal factor. His 14-year-old sons are both high school football players. "They've got dreams of going all the way," he said, but the script laid out all his paternal fears about a system that all too often puts the needs and health of players last.

However, Waugh’s a notorious stickler for accuracy in his films, so he sent the script to a friend of his, who also happened to be coaching his sons: UT alum, Longhorn Hall of Honor inductee, and 14-year NFL veteran Cory Redding. "I said, 'I want you to read this script, because I don't understand enough about college sports. … Can you read it and just tell me if you feel like it's accurate.' He called me the next day and said, 'I was pissed reading it, and I laughed, because it is what we deal with.'"

That's when Redding told him a mind-boggling story about how, in his senior year, he had to take out his own insurance before the draft because he couldn't afford to get sick: but he had to borrow money for the premiums because he couldn't afford them either. "I thought he was an anomaly, but I started talking to [New Orleans Saints safety] Malcom Jenkins and all these other professional athletes, and I found out that's very standard practice. These kids are out there on this field, and there's money being made. OK, you don't want to pay them, but you can't even provide medical insurance or a health plan?'"

Waugh's never been afraid of tackling controversial and divisive issues like mandatory minimum sentencing in Snitch, or Shotcaller's depiction of the dehumanizing effects of prison. However, he's never presented himself as an activist filmmaker, instead laying out the facts in as balanced and nuanced a manner as possible (as he explained, "I try to put it on the 50 yard line") with the aim of sparking discussion. This time, the aim was to help audiences “understand the debate that is going on right now with collegiate sports and the NCAA." In this case, he wanted to make sure he discussed what "the NCAA is getting right. ... The debate is about paying the athletes, but let's be clear: the debate is about men's football and men's basketball. What happens to all the other sports? What happens to Title IX? What happens to women's sports, and all the kids that we're bringing up from below the poverty line by giving them a shot at universities. So it's not a cut-and-dried thing."

Still, he couldn't avoid having some skin in the game. "With having sons that are in football, it's hard not seeing that there's change that has to be made."

Austin Chronicle: For anyone from outside the US, it's astounding how much of the American academic system is built around sports, especially when it comes to money.

Ric Roman Waugh: When I came on the movie I started looking at all the staff. "OK, wait a minute. How much does it generate a year, just men's basketball and men's football?" And you're talking about over $18 billion a year. "OK, so how much are they spending on student athletes? On scholarships, it's got to be up there." Well, it is, but it's about $3.5 billion. Then you start to think to yourself, wait a minute, there's $15 billion, and that's going to help all the other sports and all the other things going on, so maybe that's where it is.

But then you see someone like [Trojans head coach] Lincoln Riley that's going from Oklahoma to USC, and he's going to make $100 million in 10 years, and having multimillion dollar homes paid for leaving Oklahoma, and a new multimillion dollar home, private jets, and everything else. And yet a kid can't even accept a free meal, he can't accept any kind of gift as a student athlete. That, right there, there's something wrong with it. Just the ethics of it.

Yes, the movie was scripted, and it was scripted as a drama, but we tried to get it as close to the realm of facts as possible. When it comes to people like Malcolm Jenkins of the New Orleans Saints, or (Seattle Seahawks QB) Russell Wilson, or Jemele Hill, who is a sportscaster, what's coming out of their mouths about the system was not scripted. We just allowed them to have a platform to talk - Malcolm Jenkins talking about his days at Ohio State about how many of his peers were left behind, or permanently injured from injuries that were never given medical. These statements are out of their own mouths. They were never scripted. The only things that were scripted were about the movie's plot.

“This wasn’t good versus evil, this wasn’t the players versus the twirling moustache bad guys of the NCAA. It was capitalism gone wild.”
AC: And one of the things here is that nobody's hands are completely clean. Even the strike organizers have gained from the system, and the benefits of boosters. Moral ambiguity is a real part of your work, which has become a strange issue in cinema this year because of a push back against unlikable protagonists. How do you approach that kind of character?

RRW: The first thing that I do is that I don't treat characters as the protagonist or the antagonist. I actually try to indicate what is the true antagonist. In Shot Caller, the antagonist is prison, and what it does to coerce people to go against each other, or figure out how they can survive, and how far they push their own morality to survive. In National Champions it was very easy for me to see that this wasn't good versus evil, this wasn't the players versus the twirling moustache bad guys of the NCAA. It was capitalism gone wild. It was the system that was built to help kids get above the poverty line and get an education through athletics - and it still does that, but it's become so commercialized that it is now become about greed.

There's a great line in the movie that I got from real players, that they used to say that the boosters in college sports are actually called the team owners. Because they have so much sway about what happens. They can make or break a coach. They can get students recruited. They can change the tides of how the school operates, what is being built, who gets what seats. The fact that the two latest coaching deals, they're being paid more than 90% of all NFL coaches who are supposed to be in it for the professional part. 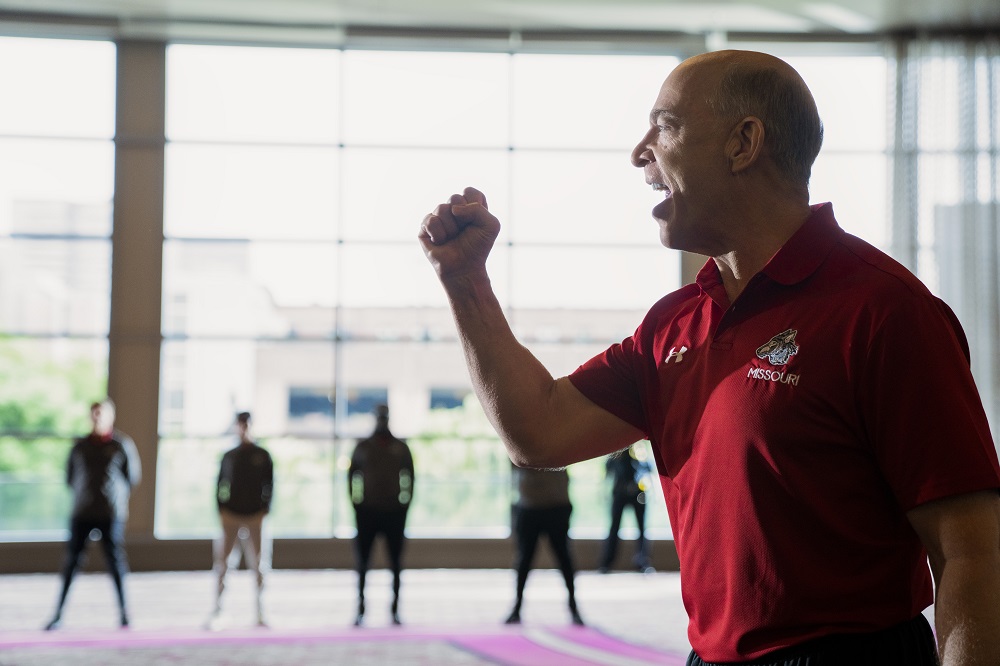 AC: One of the most complicated figures is coach Lazor, which gives you the opportunity to work with J.K. Simmons. You go to certain actors for certain things, and goddammit, if you're not going to J.K. Simmons for an uninterrupted three minute speech, you should give him to someone who knows what they're doing.

RRW: Not only that, but I made him do it on the first day. And he might have called me a few profanities.

We kind of talked about the schedule, and I said, "I'm going to ask something of you." He said, "Yeah?" and I said, "I'm gonna ask you to do your big speech, the very first thing up." He might have called me a few names, but he understood it, because that morning the nervousness of the first day on set, the nervousness of those kids who half, three-fourths of which had never even seen a film set before, and then here comes this Academy award-winner in front of them. And every single take he did there wasn't a kid who didn't have a tear in their eye, and was very emotionally linked to what he was saying.

After, I said to him, "Thank you. Thank you for setting the emotional tone of the movie. Because now everyone understands where we're going."