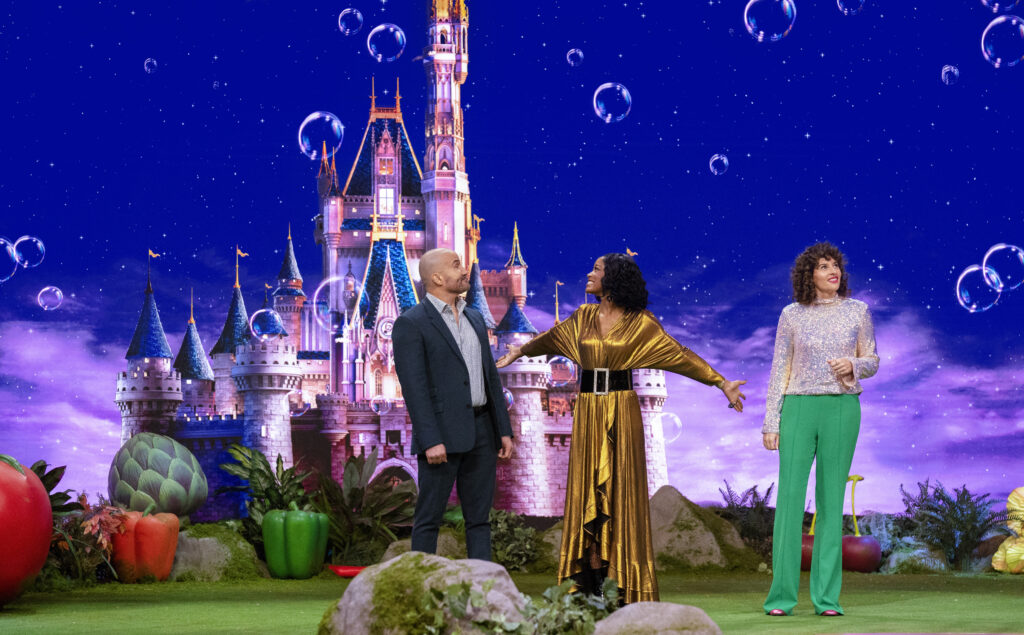 Host Keke Palmer (center) on the set of Foodtastic, the new baking competition show on Disney+. Local gingerbread artist Stacy Frank appears in an episode of the show, which debuted today. (Photo by Disney/Mitch Haaseth)

It's a stressful day for Stacy Frank. Not only does she appear in Foodtastic, the new baking competition streaming on Disney+, but she has to wait to watch her episode until tonight. "My parents going to come in town to watch with me," she said. "But they're coming over at 7 tonight, and the episodes drop at 8:30 in the morning!"

Teen Frank would be thrilled to be part of a Disney show, having grown up during their animated Renaissance with The Little Mermaid and The Lion King among her favorite films. She said, "There is a picture of me touring colleges, and there's this huge Simba tied to the back of my suitcase. I'm talking a couple of feet long."

However, teen Frank might have been surprised that she was on the show to create a life-size sweet treat depicting a pivotal moment from a Disney film. So how did the Austin resident and web developer end up as a prize-winning creator of elaborate cookies? "I just tried it one day, and really liked it."

She'd always been eager in the kitchen. Inspired by her mother ("who's always baking") she took it up more seriously in college, making little treats for friends. "When a friend went to nursing school, I made little cake ball apples," she recalled. It was actually another friend who, in 2015, asked her to bake some roller skate-themed treats for a party. "They were adorable, with this little retro design on them, and she loved them. Fast forward a couple of weeks, and she goes, 'Hey, did you know that there's a baking competition in Austin? You should enter it." After being cajoled by everyone she knew, she finally entered - and won both her category and her division, in so beginning a successful run as a competitive baker.

The grand tradition of the gingerbread house meant that the classic mix of flour, molasses, sugar, and ginger would have the structural integrity for complex structures. Yet Frank wanted to move beyond winter cottages, and into grander designs. Of course, being part of a much smaller section of the bakery compared to the cake makers means there are fewer people from whom to learn new tricks - which is exactly how Frank likes it. Her kitchen is as much laboratory as artist's studio. "If I can look up a tutorial on exactly, step-by-step, how to do something, my brain's like, 'Yawn.' I want to play with it. I want to experiment. I want trial and error. I want to cry because I just spent 10 hours doing something, and it didn't work. I love the process of figuring stuff up."

So she had a lot to figure out when she was called by producers of Foodtastic, inviting her to be on the show. Much like her first experience with a local competition, she was hesitant - if anything, more so, because she'd already been on one show that never actually aired "and it was a lot of work and time, and this isn't my job [but] the second I did the Zoom and really felt the energy with the Disney+ people, I thought, 'Oh, this is gonna be cool. Sign me up!'"

Even better, they let her pick her own team. The first person she called was a TV food competition veteran, Maurice Shelton of Indiana's Black Rose Pastry. The winner of season 1 of Netflix's Sugar Rush, Shelton (aka Chef Blāque) was her immediate first pick, and she was thrilled when he said yes. "His energy is so positive. Anything can be going wrong and that man will be smiling about it - not to mention that he's very good at what he does."

It was actually a podcaster she knew that lead her to the third team member. "I said, you know me, you know my personality, do you have any suggestions about someone who would be good? Because most of my baking contacts are cookie people, and to do a life size build it is not smart to have two cookie people." Her response: cake baker Jesse Lesser to the team. "She said, 'You guys would get along great,' and I brought the name up to Blake, and he was like, 'She's literally one of my best friends.'"

So with the team assembled, now they got to find out what their scene would be. "I was like, 'C'mon, Lion King!" she recalled. So her stomach dropped a little when the theme was revealed: The Avengers, one of the few Disney properties she didn't know. "Thank god Jesse and Blāque are super fans," she said. "I worked on one character I was familiar with, so I really lucked out there. But I definitely had a little panic there."