SXSW Announces Everything Everywhere all at Once as Opening Night Film 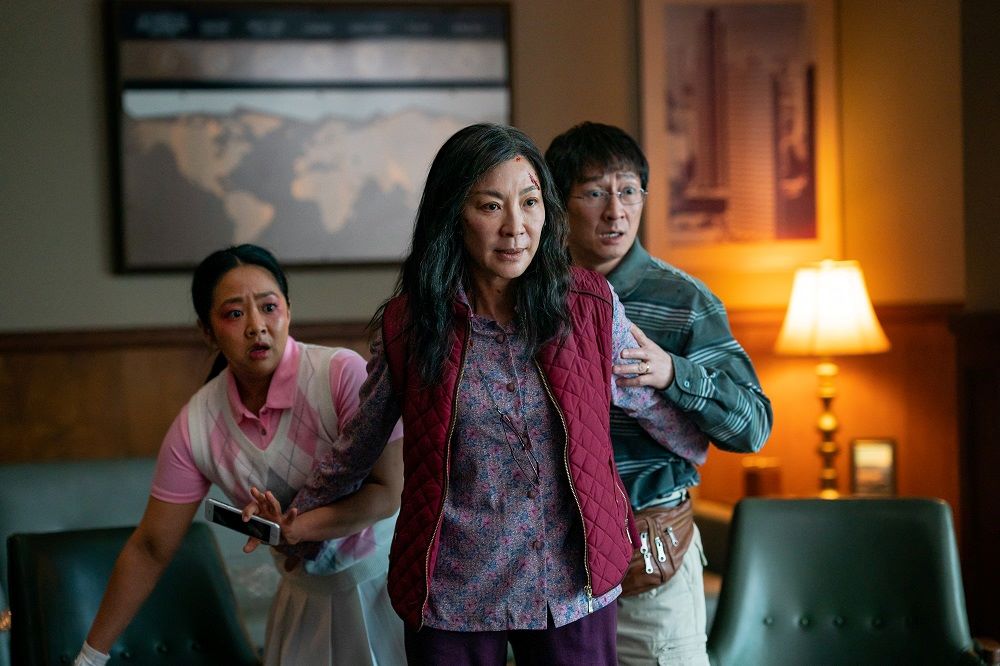 Michelle Yeoh in Everything Everywhere all at Once, the upcoming comedy from the Daniels. The film has just been announced as the opening night title for SXSW 2022. (Photo by Allyson Riggs, Courtesy of A24)

After you've piloted a fart-propelled corpse across the ocean, and devastated an apartment with twerking, where else is there to go but SXSW? Everything Everywhere all at Once, the upcoming film from directing duo the Daniels and starring Michelle Yeoh, will be the opening night selection for SXSW Film 2022

The Daniels, aka Daniel Kwan and Daniel Scheinert, are no strangers to SXSW. They have won the film festival's grand jury music video award twice - in 2012 for their one-shot escalator horror "My Machines" for Battles, and again in 2015 with the sweat-dripping visual take on DJ Snake and Lil John's club banger "Turn Down for What." That same year, they also parlayed their unmistakable real/surreal style into SXSW selected short "Interesting Ball." That in turn became a warmup for their incredible and inimitable feature debut, Swiss Army Man, the heartwarming tale of a shipwrecked man Hank (Paul Dano) and his only friend, an incredible useful and helpful corpse he calls Manny (Daniel Radcliffe).

Five years later (and after Scheinert made his solo directorial debut with the strangely poignant The Death of Dick Long), the duo are poised to return with their sophomore feature, Everything Everywhere all at Once. It stars Michelle Yeoh as a woman who can't finish her taxes, but this is the Daniels, so strap in for a wild ride.

Preparing audiences as much as is possible, SXSW Director for Film Janet Pierson called it "fantastically inventive, entertaining, emotionally grounded, and crammed with the exceptional creativity that makes their projects so satisfying. ... Audiences are going to have their minds blown by this extraordinary feat of filmmaking.”

Everything Everywhere all at Once also stars Stephanie Hsu (The Marvelous Mrs. Maisel), Andy Le (Shang-Chi and the Legend of the Ten Rings), Ke Huy Quan (a movie legend as Short Round in Indiana Jones and the Temple of Doom), Jenny Slate, Harry Shum Jr., and two genuine cinematic icons: James Hong, and Jamie Lee Curtis. It's produced by the Daniels, Jonathan Wang, the Russo Brothers’ AGBO and A24, and executive produced by Ley Line Entertainment, IAC and Josh Rudnick.

The 29th annual SXSW runs March 11-20, 2022. Badges and info at sxsw.com, and keep up with all our SXSW news, reviews, announcements and interviews (plus our unbelievably extensive archive) at austinchronicle.com/sxsw.

Now, just to give you a little taste of the frantic visual mayhem that is the Daniels' signature, here are those two award-winning videos:

DJ Snake and Little John: "Turn Down For What"

SXSW 2022, SXSW Film 2022, The Daniels, Michelle Yeoh, Everything Everywhere All At Once