Making the Flowers Bloom in Encanto 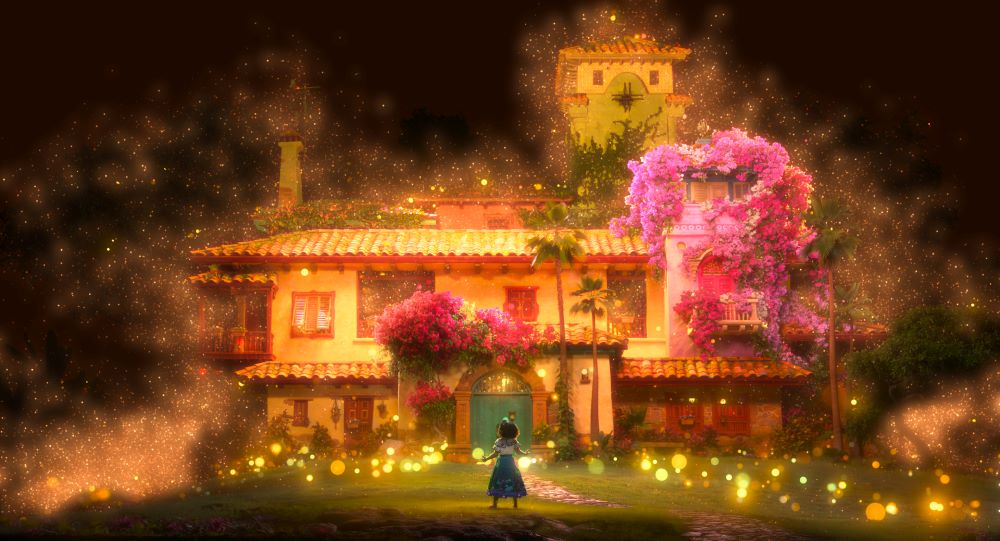 Who makes the flowers bloom at the Casa Madrigal in Encanto? Jay Jackson and his team of animators, that's who. (Image Courtesy of Disney Animation)

In Encanto, the latest animated musical from Disney, flowers bloom everywhere Isabela, the oldest and most perfect daughter of the Madrigal, lays her feet. But who plants the magical and technological seeds from which they spring? That would be Jay Jackson and his team of environmental animators.

In the new Disney film, which opens this week, Isabella is one of the many Madrigals with a special power, like seeing the future, or talking to animals. They all have one - except for Mirabel (Stephanie Beatriz) who must find her place as the ordinary member of this extraordinary family.

Encanto is Jackson's fourth feature for Disney Animation, and here the former Austinite and UT alum served as environment look supervisor, a job that he described, at its simplest level, as "[building] the characters and environments that get reused throughout the film." More specifically, he was one of three supervisors on the environments teams, working on "everything that's not a character or an effect, like water or sand. So basically the sets and the background." As supervisor for the look development team, "we get the models from the modeling department. Before we touch it, everything's grey and plastic-looking, really flat and simple. Then we take that and add all the rest of the color and detail. We put grass everywhere, we put flowers everywhere, and in this film there are flowers everywhere."

Designing the surfaces is a complicated process, one that involves studying materials at a deep level - even something at simple as a candle. "What makes candle wax look like candle wax? It's got a certain amount of subsurface coming through it, so when light hits it, when [the Lighting team] takes over, it reacts like it's supposed to."

This often meant working closely with other departments, such as with the effects department on the magical glowing doors of the Casa Madrigal. Jackson explained, "They did the little particles coming off the doors, and we did everything on the surface, all the fine detail carving."

“We put grass everywhere, we put flowers everywhere, and in this film there are flowers everywhere.”
Not that the lines between departments and responsibilities would always be clear cut. Take the massive Bougainvillea on top of the enchanted Casa Madrigal. "At one point it transforms from looking leafy to the big, pink flowers, and we didn't know who was going to handle that transformation, our department or Effects, just to see what might work better for the production."

Who won? "They did," laughed Jackson, but there were also plenty of times where the teams worked together. "Nothing happens in isolation," he explained, such as the massive wall of blooms in Isabella's room, dubbed by the animators the Flower Jumbotron. "When she sings her songs, all the different patterns and graphics behind her, each flower is like a pixel. ... That was more collaboration, where Effects handled the 2D patterns, and then we handled building the whole flower wall, so that once we plug in a pattern all these flowers will change and do crazy stuff."

Encanto is Jackson's first project since Frozen II - no surprise, considering the massive technical and creative demands of creating a modern animated movie, "and of course COVID hit, and we had a really technical challenge of having everyone work from home." Initially, they were expecting a two-week hiccup "and then of course it dragged on, so we're still at home." That meant finding ways to coordinate the basics of production, and Jackson said there was "a huge technology team setting us up to do streaming, and solve a lot of challenges, like how do we all review the same stuff at the same time and see it in the same color space."

That created a particular level of complexity for Jackson. Each animator was working on solving their problems: as supervisor, he was engaged with everyone's problems. With remote work, "not being able to wander over, just chatting and looking at the same screen together, figuring it out, that's the biggest con." However, there have also been some big pros to remote working. He said, "Normally, before COVID, we'd be in meetings all day, sitting all together in a review room or conference room. Now we're on Zoom, I can listen in to certain meetings and reviews, and work at the same time, and be creating stuff. ... We're a pretty small team, so any amount of work I can take off of some of the artists really just helps elevate our entire team's output."

Jay Jackson: It started really early on with our production designer, Ian Gooding, who was also on Moana. He had an idea in his mind, and he's talking to the directors, but it doesn't exist yet because we haven't figured it out.

So the first thing we do is a look of picture test, really trying to figure that out. Early on, we were actually thinking it would be a lot more stylized than it ended up being, with really simplistic shapes for areas of color. We always knew it was going to be colorful, which is kind of unique to Encanto, but we were really playing around with simplifying stuff. So in the kitchen, rather than a smudge on the counter being realistic it was more exaggerated and bigger.

We actually had to pull back from that once the directors started seeing it because we thought this house would be more clean. "Oh, it's a magic house, maybe it's more perfect," but they had us pull back and be more grungy and unclean and realistic, just to immerse you in the story a bit more.

AC: Once a surface is 'done' do you ever have to restructure the model underneath, because of how it's going to look: or, once it's got to you, is it more that you have to make it work?

JJ: It happens a lot, we call it "kicking it back to Modeling," but it's a mix. Sometimes we'll try to make it work, but sometimes if it really makes sense we'll kick it back to Modeling to change it. It's really case-by-case, and there are a lot of factors. How important is the thing? How close do we see it onscreen? How big of a change do we really need from modeling, versus 'can we fake it in our department and make do with our department?' Because we can do a little detailing on top, but if it's a really big change we have to send it back. It happens every time with every big film, so it's expected and part of the process. AC: And you're also working with the character team, especially because the rooms really reflect each of the Madrigals.

JJ: Bruno's room in particular we had a lot of fun with. We hid little cobwebs everywhere, and there's actually rat poop in there. It's hard to see, it's really small. ... The characters say that he's really like a hoarder, so we're just cramming as much stuff in that room as we could.

The challenge is that, normally for a film, you can create a set of vegetation that works for the whole film. But if you go into Antonio's room, it's actually a whole different region of Colombia. It's more of the Chocó–Darién rainforest, rather than the Cloud rainforest of the village that the house is in. So it's all new trees, all new plants, bushes that are distinct to that area. So it's almost like doubling up the entire work, or multiplying by each room.

“We put grass everywhere, we put flowers everywhere, and in this film there are flowers everywhere.”
AC: I talked with [production supervisor] James Romo about making Raya and the Last Dragon about the amount of on-the-ground research the team was able to do, even though it was a purely fantastical environment, to go to the countries that influenced the design of each realm. Here you are actually trying to reflect Colombia, and you're in the middle of the pandemic, making the research trips a little more challenging.

JJ: We were lucky that at least the directors and a few other people managed to go on one pre-COVID, so they had a ton of video and picture reference. There was another trip planned for the week after lockdown, so that was cancelled.

AC: As supervisor, are you still able to get into the detail work yourself?

JJ: That's one thing that I really enjoy about being a supervisor: having the flexibility to both lead a team and do everything that needs to be done on the leadership side of things, but as supervisors we also have a set time to be artists as well.

I really enjoy doing that, being in the weeds with the artists a bit, so I can really understand everything that's happening with the film. Early on, we had a lot more time and it was very blue sky, so we didn't know what the courtyard was going to look like, so I got to take a pass myself. It was a lot of fun, and I really enjoy just having that creative freedom, and this art team particularly is very supportive of having people have their own ideas and make it into the film, rather than being top down, "This is how it's going to be." They really embrace the happy accidents.

AC: So what was the happiest accident?

JJ: Beyond the rat poop? That was one of the artists. She went, "Well, there's all these rats," and she had the idea so I went, "Go for it," and the directors liked it, so it stayed in there.

A lot of it is really just exploration. For instance, there's a whole flower curtain that Isabella's hiding behind, and we had no idea what how to execute an actual curtain made of flowers. That's the kind of thing where there's not a lot of great real-world reference for what to do. Or the glowing doors. That's a lot of exploration. What does a magic door look like in this world?