Sound Unseen is Blowing Up Your Stream 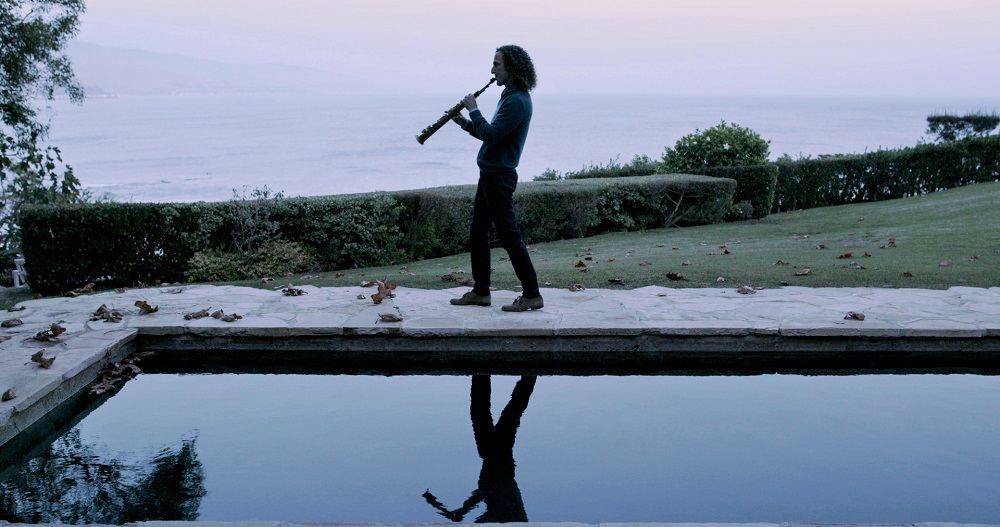 Listening to Kenny G, one of the titles available via the virtual Sound Unseen film and music festival in Austin (Photo by HBO)

60 degrees in Oxford. 33 in Minneapolis. 80 in Austin. Wherever Jim Brunzell goes, he noted, “Fall is here.”

Why the mileage? Oxford, because that’s where he’s currently working as interim executive director of the Oxford Film Festival. Minneapolis, his hometown, because that’s where he’s been involved with the Twin City’s hybrid music and film festival Sound Unseen since 2008 (including as festival director since 2012). And Austin because the former programming genius behind the All Lifestyles, Genders, and Identities Film Festival helped bring the 2020 virtual edition of Sound Unseen here. That first year was a pandemic experiment, Brunzell recalled. “We had the sea-change of doing everything virtually. This year, we’re doing things virtually and in person, and in two states.”

Sound Unseen launched with two in-person screenings in Austin last month (the Texas premiere of documentary Fanny: The Right to Rock, and a retrospective screening of Todd Rohal’s The Guatemalan Handshake), and kicked off its IRL Minnesota leg this week, but both cities get access to the extensive online screening library, available Nov. 10-17. “Our films are very different from each other,” Brunzell said, “but as a music fest you’re dealing with different genres, and people will watch two or three films.”

“I’m not a Kenny G fan, but the film’s incredible.” – Sound Unseen festival director Jim Brunzell
Film fans and the film-curious may watch the entire slate, but the fest is filled with scene-specific picks. So say you’re a fan of Eighties and Nineties American alt music: You may stream the Texas premiere of Freakscene: The Story of Dinosaur Jr. and let the feedback of J. Mascis’ fuzzed-up monsters bleed into ForeverMoore; The Angelo Project, exploring the legacy of Fishbone frontman Angelo Moore. Punk historians may want to delve into the the community that sprung out of the Greenham Common peace protestors with Rebel Dykes, or the lost history of the band that sparked the Ontario Place riots in Picture My Face: The Story of Teenage Head. Women breaking industry barriers down are the focus for both Fanny: The Right to Rock (about the first all-woman rock band to land a major-label deal) and Invisible: Gay Women in Southern Music, about the unsung lesbian trailblazers of country. Maybe you want to take in a vicarious virtual world tour, via France (Marseille, Rap Capital!), Iraq (The Forbidden Strings), and Indonesia (A Punk Daydream). Or maybe you’re fascinated by the stranger stories of rhythm, like the young Jehovah’s Witnesses who rebelled against authority in Witness Underground, or the continuing cultural relevance and joke status of the biggest-selling instrumental artist of all time in Listening To Kenny G. “I’m not a Kenny G fan,” Brunzell said, “but the film’s incredible.”

When it comes to booking a virtual festival, especially one in two cities, “there’s no treasure map,” Brunzell said, and the situation is only getting more complicated. The pandemic has completely shaken up the film distribution scene. Two years ago, he explained, “Films would premiere at fests, then go to VOD or Blu-ray six months later. Now those windows are crushed. They’re 30 days or 40 days or 60 days.” Yet that doesn’t mean filmmakers and distributors are bypassing festivals. Listening to Kenny G will stream even though it debuts on HBO in December, while Sioux Falls underground history I Really Get Into It: The Underage Architects of Sioux Falls Punk is already being self-distributed. But while the industry is changing, the festival could well be here – in Austin and Minneapolis – to stay. Brunzell said, “We’ll keep doing it as long as people come.”

D: Bernadette Wegenstein
The story of Marin Alsop and is an inspirational story of denying naysayers and an overdue story of an internationally known American artist. The film celebrates the power of music and how it plays a role in people’s lives to bring joy, heal and reflect the world inside and around us.

Fanny: The Right to Rock

D: Bobbi Jo Hart
The untold story of a self-formed, California garage band -- that included queer and Filipina American bandmates -- which morphed into the ferocious rock group Fanny, the first band of women to release an LP with a major record label. (Available from Nov. 15)

D: Hasan Noori
They’ve been making music together for years, despite the disapproval of the people around them. Akbar, Soori, Mohammed and Hakim are the only young immigrants in Iran who have formed a rock band. All they miss now is an opportunity to play live. The Forbidden Strings shows the musical foursome struggling to get themselves heard, and follows them in the run-up to a historic day.

D: Tisa Zito
Angelo Moore devotes his life to weaving a legacy; crafting art through spoken word, music, and fashion. With the band Fishbone, as an African American forerunner in the early 80’s LA punk rock scene, he's inspired others to embrace nonconformity. (Available from Nov. 11)

Freakscene: The Story of Dinosaur Jr.

D: Philipp Reichenheim
An homage to one of the most influential bands on the American East Coast, which inspired the rock scene - including Nirvana and many others - in the 1990s. Their style and unmistakable sound, later referred to as "Grunge", laid the foundation for the entire "Slacker" culture of Generation X. (Texas premiere, available from Nov. 11)

I Really Get Into It

D: Brian Biebe
Largely ignored and left to their own devices, a group of unassuming teenagers in late 80s and early 90s Sioux Falls, South Dakota created their own culture, community, and economy. And when they moved out into the world at large, they brought what they learned along with them. (Texas premiere, available from Nov. 12)

D: John Clayton Doyle
An offbeat, heart-warming portrait of the world’s least likely rock star. This documentary-narrative hybrid feature tells the story of Doug McCorkle, a buttoned-up, mild-mannered corporate accountant. After retiring at age 60, Doug puts his marriage and life savings on the line to chase his wildest dream.

D: T.J. Parsell
Deeply moving and triumphant, Invisible gives center stage to the lesbian women who have long been hidden behind the curtain of the country music industry, all while working with big-name artists and making major contributions to the scene. (Texas premiere, available from Nov. 12)

D: Penny Lane
Kenny G is the best-selling instrumentalist of all time, and arguably the most famous living jazz musician. Listening to Kenny G is about why that makes certain people so mad. (Available from Nov. 14)

D: Gilles ROF, Daarwin
This documentary retraces the incredible saga of hip-hop in Marseille, a musical, cultural and social phenomenon which, in thirty years, has built an unprecedented success story. (North American Premiere)

My Name is Lopez

Picture My Face: The Story of Teenage Head

D: Douglas Arrowsmith
Canada's notorious glamour-punk band Teenage Head is determined to enter the limelight once again some 40 years after causing the legendary punk rock riots at Toronto's Ontario Place, but followed by a series of setbacks they first need to save their founding band mate from a crushing depression. (US premiere, available from Nov. 13)

D: Jimmy Hendrickx
A Punk Daydream is about a group of young punks surviving on the streets of Jakarta, Indonesia’s capital. Eka and his friends have escaped parental and school authority, and strive for individual freedom amid smoldering waste. They have a dim view of Indonesia’s future which, since the end of the Suharto era, has struggled with corruption, environmental pollution and poverty.

D: Harri Shanahan, Siân A. Williams
A rabble-rousing documentary set in 1980s post-punk London, UK. The unheard story of a community of dykes who met doing art, music, politics and sex, and how they went on to change their world. (Available from Nov. 15)

D: Nick Canfield
The Reverend follows the spiritual and musical journey of Reverend Vince Anderson. After coming to New York in the 90's to enter seminary, Vince dropped out to follow his second calling - music. With his band The Love Choir, he has played a now-legendary weekly show for over twenty years. (Available Nov. 15)

D: Henry Mortensen
Peyton Bighorse and Kelli Mayo are step-sisters from Oklahoma who founded their band, Skating polly at the ages of 14 and 9, respectively. They call their style of music, "Ugly Pop": infectious melodies, but with real-life blemishes still showing. This film is a documentary exploring the early years of Skating Polly. (Available from Nov. 13)

D: Philip Sansom, Inigo Gilmore
This is the inspirational journey of 12 young musicians from some of the toughest slums in Uganda, to some of the biggest music stages in the world. It's a story of resilience and hope, carried along by a joyous, foot-stomping celebration of music and life. At the heart of this film: the power of music to change lives and a charity called Brass for Africa.

We Are the Menstruators

D: Nadia G
A film about punk rock, authenticity, and the real cost of ambition. It's also a film about the American Dream, albeit in reverse. (Texas premiere)

D: Scott Homan
A feature documentary that reveals the insular DIY artist community that emerged within the high-control Jehovah’s Witness religion in Minneapolis. (Available from Nov. 13)