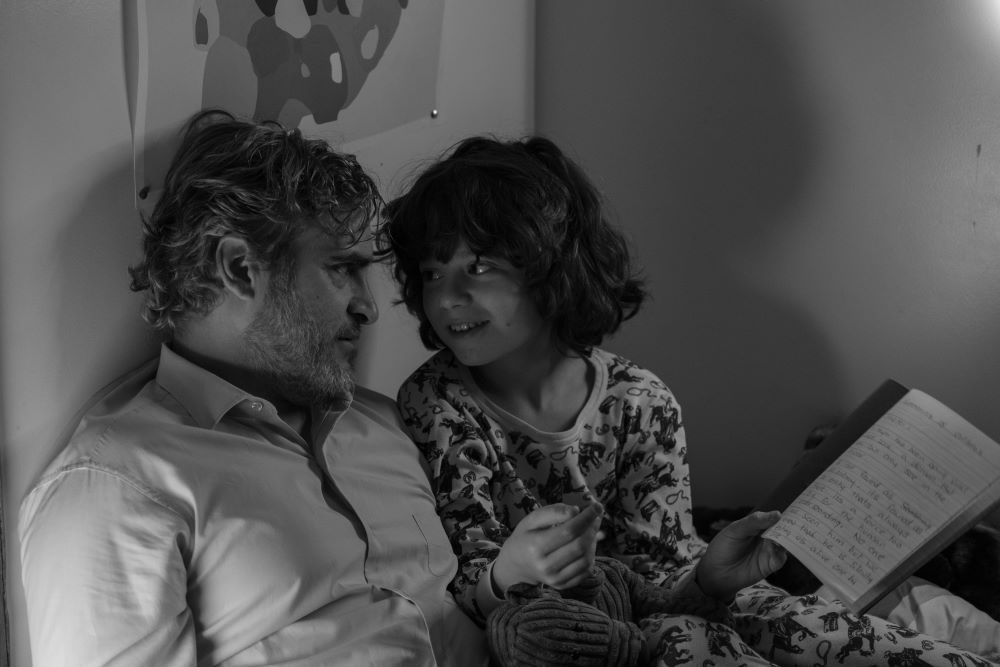 The pitch for C’mon C’mon isn’t surprising territory for director Mike Mills to be preoccupied with: the heartwarming story about middle-aged bachelor Johnny (Joaquin Phoenix) who is entrusted with watching his nephew Jesse (Woody Norman), whom he hasn’t seen in over a year and who has as much to teach Johnny as Johnny does him.

I’m halfway joking with that description. True, this is basically what the movie is about, but it wouldn’t be like Mills to make something quite so simple or maudlin. As a movie centered around a kid, this is the rare film whose crux lies in the idea of children being taken seriously about their feelings, hopes, concerns. Jesse’s mom Viv (Gaby Hoffman) says that he’s just a “little person”, and Johnny being up-front and honest with him like anyone else is the most effective course of action he could take.

Johnny should be attuned to this: he’s a broadcast journalist whose current project involves interviews of children discussing what they think the future will be like, and the ways the adults in their lives shaped it. Yet his guardianship over Jesse seems to fill him with anxiety and fear over what it actually means to parent a child. Between a falling out with Viv over their sick mother and a break-up that he still hasn’t moved on from, Johnny sees his custody as yet another potential screw-up.

Much of that fear is carried over from his conversations with kids that are dotted across the runtime. Seeing that these are real interviews integrated into the story, they carry a hefty weight when intertwined with the concerns of the characters. Many of the discussions circle back to how previous generations have set kids up for failure, that they were born into a world they didn’t have a say over, that they wish the adults would have been more mindful to take care of the planet they’re leaving behind. This burden of potential failure is distilled down into something always surrounding Jesse by the parental figures in his life, such as the way Viv has had to leave him alone with the uncle he barely knows because of his father Paul (Scoot McNairy) going into a manic episode. Or the way Johnny works through his regret after briefly losing his temper with Jesse after he hides from him in a convenience store.

The way Mills (Beginners, 20th Century Women) maneuvers through all the complex, bittersweet emotions is sensitive and touching, but never cloying. As has become a trademark in his features, he’s able to tactfully navigate the poignant struggle of connecting with each other with a delicate grace and assured hand. Also typical for him is that he has an excellent cast to convey his ideas through. Phoenix turns in a softly bravura performance alongside Norman, who manages to play an eccentric, emotionally complicated child with an amazing naturalism and ease. Just as notable is Hoffmann who communicates the tribulations of parenthood with compassion and exhaustion in equal measure; this is a movie just as much about motherhood as it is about the blooming relationship of an uncle and nephew.

The grounded narrative is served well by the handsome black-and-white photography from Robbie Ryan, who captures the cityscapes, beaches, and interiors with a loving intimacy that matches the perceptive writing. This is far from the first movie about the perpetual struggle of relating to other people; it’s not even Mills’ first stab at it. But C’mon C’mon is so lovingly assembled and insightful in its thematic concerns that it feels like he could keep returning to that well and find something just as essential there every time.