Of Fleece and Folklore: Noomi Rapace and Valdimar Jóhannsson Raise a Lamb

In the fields and fables of the new A24 rural folktale 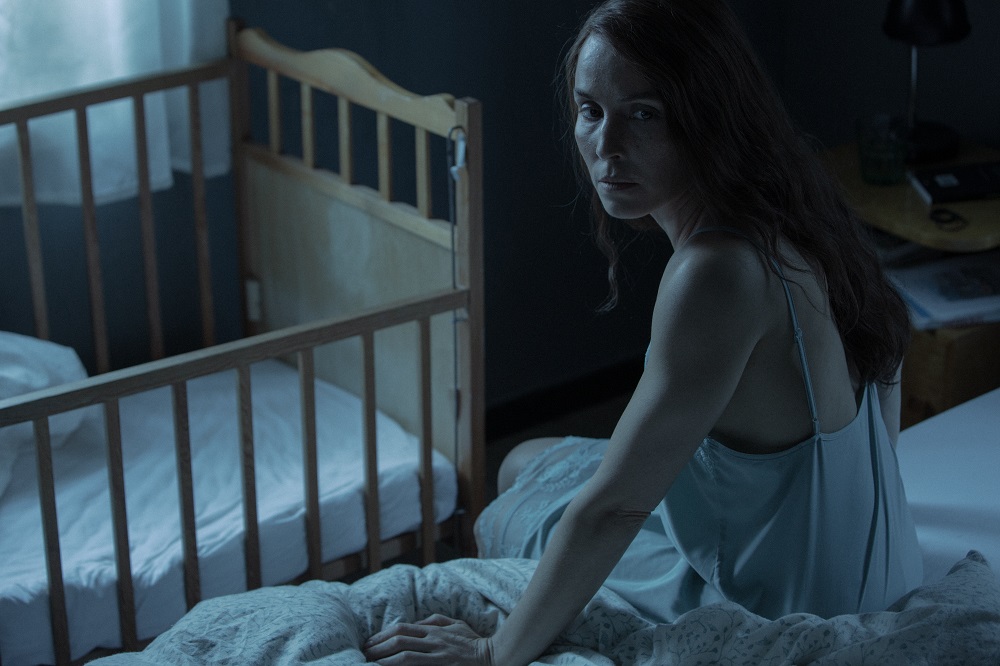 "They pick the favorite. They pick the strong one." Noomi Rapace on the quite brutality of sheep in Lamb, the new folklore tale from A24. (Image Courtesy of A24 Films)

People have a lot of strange ideas about sheep. That they're soft and cuddly, stupid and easily scared. Not so, Noomi Rapace observed. "They're brutal."

She should know, and not just because one of the first times she appears onscreen in modern fantastical fable Lamb she's in the lambing shed, covered in mud and mucus, pulling a lamb out of a ewe. She grew up in around sheep, bottle feeding orphans, "and then in September it's slaughter time. 'Bye, Sarah!' You get way too attached, and it breaks your heart."

Director Valdimar Jóhannsson had a similar childhood, in a small village 10 minutes walk from his grandparent's sheep farm. "They're amazing creatures," he said, and having grown up around farmers he felt a particular pressure to portray their lifestyle accurately, especially since it's one so rarely represented on screen. "I remember there was a very popular film in Iceland about sailors, and my father was a sailor. He was picking small details that were wrong."

Rapace nodded. "When we screened it for the farmers, and the people of Akureyri, up in the North, we were so nervous for what they would think. They are the hardest critics."

In that early scene, one of the ewes gives birth to twins, and the reality is that the mother will likely reject one of them. If the farmer can't get another ewe, one that has lost her lamb, to adopt and suckle it (and you really don't want to know how they do that), it'll die. "They pick the favorite. They pick the strong one," she added.

In Lamb (which received its US premiere in Austin at Fantastic fest and is on release now), Rapace plays a sheep farmer in a remote corner of Iceland. She tends her flock with her husband (played by Hilmir Snær Guðnason) when she becomes the adoptive mother to one lamb. However, there's more than just four hooves and a plaintive bleat to this little one, a strange creature from between two worlds.

This ovine fable will strike a chord in anyone that has spent time around a flock. There is something magical, almost arcane about them. Just look at their eyes, Rapace said. "It's like a planet."

Sheep also hold a particular place in Icelandic culture. Not surprising, considering they outnumber the human population by over two-to-one, but that has lead to a special cultural weight. "In Iceland, there's a book about sheep. It's 13 sheep stories about this special breed that have saved so many lives. They're so clever. They know when the weather is going to change. It's almost like a love letter from farmers."

Lamb (Image Courtesy of A24 Films)

Austin Chronicle: You're picking up the entire cycle of a sheep's year.

Noomi Rapace: We started shooting lambing season, and I was pulling them out and seeing them grow, and then we took a break, and then we came back in July, and we shot until September.

Valdimar Jóhannsson: When you came to Iceland, we were a little bit stressed.

NR: I was stuck on another production, and they had scouted all of Iceland, but there were only a few farmers that still had some pregnant sheep.

VJ: There were only about 10 sheep left that had not lambed, and we had two or three that you delivered.

AC: And you really delivered them, which is quite a thing to experience.

NR: It's quite intense, and the smell stays with you. I came home and washed, and went, 'Well, this is not going to go away for quite some time.

VJ: We went back for pickups, and we took a flight from Akureyri to Reykjavík, and everyone was wearing the same clothes. We almost filled the airplane, but the other people were complaining so much because of the smell.

AC: This is real sheep farming, and you have to do all of it, all the dirt and cold and muck, and dealing with the animals.

NR: I guess that's my approach, always. To do as much as I can do. There was no hesitation, we didn't even talk about it. Hilmir was a bit afraid of marking them. I think in the script we were both marking them, and it ended up just being me.

VJ: I remember the farmer, he came to me and was saying, 'Oh, she must have done this all before,' because everything that you were doing was so natural.

AC: You were bringing a production on to a working farm, right in the middle of lambing season. Was it tough to find a farm that you could film on?

VJ: I drove two times around Iceland, and I asked all the farmers if they could help me. In the end my brother started helping me, and he found this place. Nobody had lived there for 20 years, but there was a sheep farmer two kilometers away, so we could use the sheep from there and the shippon.

AC: One part of farm life you really caught is how little people talk, even to each other. It's a very quiet life style.

VJ: We were trying to have as little dialogue as possible. We thought we had too much in the film, because - at least for me - it always gets stronger if you don't have to say anything.

NR: You tap into communication that is beyond words, between bodies and eyes and energies. It's strange how quickly we all adapted into that way of communicating. [Valdimar] didn't speak much on set. You'd be, "Mmm, I think I ..." and I'd go, "I think I know what you want." Then we did another take and he'd be like, "Yes."

VJ: It's also nice that we have so many animals in the film. Everyone meets the animals, and there's no dialogue, and it's easy to keep on with that.

AC: There's also this sense of remoteness, and this idea that farming communities are so self-contained that something strange can happen, and no one bats an eyelid.

NR: Where I grew up, it feels like time hasn't changed. There are a lot of places in Iceland that feel like their own little closed off universes that are so far from what you would know. When we drove into this valley where we shot, the phone just died. "Bye-bye, civilization."

Also, it brings the best and the worst out of you. All your old ghosts that you pushed away will pop up.

AC: The remoteness of farming also pulls you very close to folklore, into accepting what might seem strange.

NR: We have a lot of that in Iceland. A bunch of Santa Clauses at Christmas, who are all evil ...

VJ: And Grýla, and the Christmas cat.

NR: There's this overhanging threat that if you're not a good person, if you don't do good, you will be eaten or kidnapped. So just be nice to everyone, or you might not be here tomorrow.

Lamb is available now in theatres. Read our review and get showtimes here.