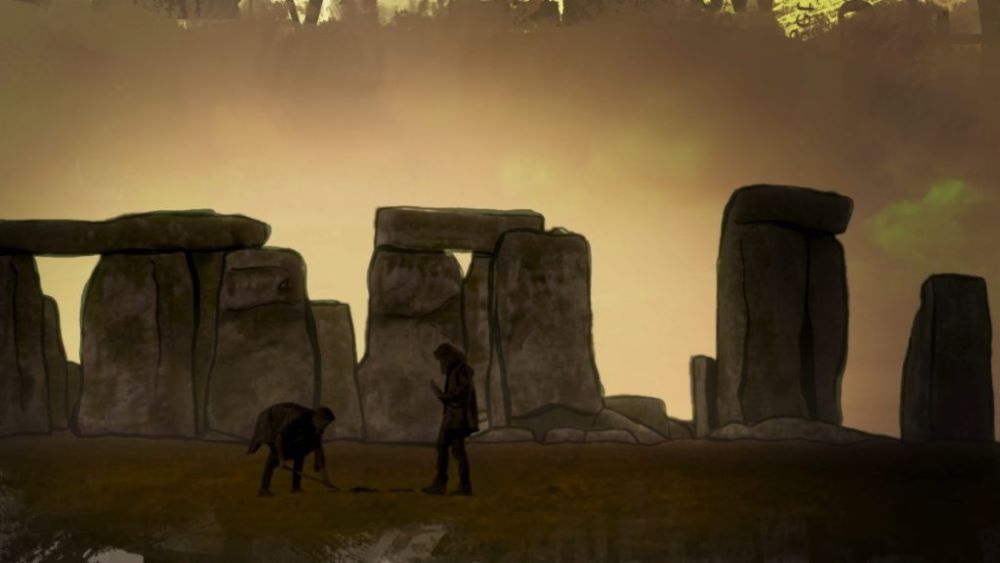 Guess where the bodies are buried? Chris Atkins opens a cold case of a missing musical legend in Who Killed the KLF?

They were the KLF. Also known as the Justified Ancients of Mu Mu. Furthermore known as the JAMS. And Chris Atkins Fantastic Fest-selected documentary Who Killed the KLF? may be the closest anyone comes to uncovering the mystery of the band that blew up the music industry during the late 1980s and early 1990s, then purposefully self-immolated.

Nothing sounded like the KLF, a seamless fusion of Chicago House, acid rave beats, British rap, Einstürzende Neubauten-style industrial, Northern Soul, brass bands, pedal steel guitar Country, whatever they wanted: but there was as much Discordianism as discography to the mysterious outfit, a band that emerged from chaos, and into chaos it ultimately went.

The whodunnit (streaming through Oct. 11 as part of the festival's FF@Home - read our review here) is an utterly unconventional music documentary - which is part of why Atkins even considered taking it on in the first place. "It was never a Music Doc with a capital M. ... If someone said, 'Oh, you've got a band, and they've sold a lot of records, and they've got a greatest hits coming out and a world tour. Would you make a doc about them so we can put it out at the same time?' I wouldn't be interested. Unless it was one of my favorite bands in the world, and I'd do it in an egotistical way, just to hang out and pretend I'm in the band."

“It’s good to have that kind of bomb go off under the medium every now and then.”
But telling the story of the KLF has been an obsession for him, and he actually first contemplated making the film in 2009. "No one else had done it, and I sat to myself thinking, 'I would love to do the definitive doc on the KLF. It would be great if someone like Adam Curtis did it.' And they never did. So I thought, well, if they're not going to, then I should, because the story has to be told before it gets lost forever."

But 2009 is a long way away, and Atkins explained that it was more than just normal long, slow process of getting a documentary made. The KLF completely disappeared in 1994, rarely to be spotted after, and only emerged again after a self-imposed and prophesied 23 year hiatus - something that Atkins was able to include in the film. He said, "It felt right, a year or so after the 23rd, to go, 'Now we can look back with the benefit of full hindsight."

That disappearance was what really slowed the film up, as was the complete refusal of founders Bill Drummond and Jimmy Cauty to talk about the band - which made the filming complex, to say the least. However, Atkins' luck changed when a series of recordings, interviews with the duo, dropped into his lap. At least, that's what Atkins claims. "I'm sworn to secrecy," he muttered, evasively. Which seems right for the KLF, a band shrouded in a complicated mythology, endless legends, and then a shroud of complete secrecy. But the tapes became the backbone of Atkins documentary, which he patchworked together with interviews, archive footage, animation, and reenactments into a holistic, shamanistic whole.

Austin Chronicle: The weird thing about the KLF was that they were the consensus band. It didn't matter what else you listened to, they were the band everyone liked.

Chris Atkins: It was the rave music that it was OK to be into. I hated rave music, and I was into them. It was that whole idea that it came out of the cellar and came into the mainstream.

AC: And you could take them seriously, or as this arch pisstake of the entire scene, and both readings were OK.

CA: They were this plethora of contradictions. Kids could tackle them, and old people could tap along to their tunes, without having any clue about the philosophy and the mythology that was behind it, because it was catchy as hell. Or, if you dug into it and you wanted to keep exploring, they left all these rabbit holes for people to crawl down.

AC: That were either nonsensical or brilliantly put together.

CA: It was the same way that you could say they had this arch plan, and they also made everything up as they went along. It was sort of a bit of both.

AC: And it's always worrying when the person who can most cogently and succinctly explain what someone is up to is Allan Moore.

CA: He did talk a lot about his magic in that interview. And it's not a pisstake. He is a self-proclaimed wizard, and as a strap line in the film we had to label him "wizard."

AC: The story of the KLF fits in with a lot of the themes in your earlier films, about the illusory nature of fame and capitalism, and the commodification of celebrity.

CA: Completely. In a way it's the third instalment of a trilogy that's taken a long time to come to fruition. ... [Music] was just one of the things these guys did, and a vehicle to explain all these ideas of capitalism, and what's true and what's not true. It was never a rigorous piece of forensic journalism because so much of it is lost in the mists of time. What did actually happen? How do we know what's actually true? I like exploring those layers to things, rather than a Paul Greengrass approach of 'everything has to be forensically accurate. Because it's the KLF. That's the completely wrong approach.

AC: So how do you make a documentary when the two protagonists refuse to talk about it? How do you even find the music, considering they'd deleted their whole back catalogue?

CA: They did sell a lot of records, so it wasn't hard finding a good, clean copy. But in the sense of having a plan, we had to abandon plans. I know a lot of documentary filmmakers say this, but they have a schedule, they have call sheets, they have a plan. We just went off and said, "We've got to do what Bill and Jimmy did. We've got to abandon the idea of what film we're going to end up with before we make it."

It took a few years for me to come up with that approach, and then it was easy. Well, easier. Because we didn't have to worry about sticking to the plan because we didn't have one. We just went off and started shooting, which was liberating for me but gave my producer a heart attack on a daily basis. So much of it was stumbled upon by just getting into it.

AC: I'm guessing that, if you'd had made the film in 2009 it would have been very different to where you ended up.

CA: This is why the timing is odd. By the time I actually got round to making it, and telling the story that way, that style of documentary making had actually become quite fashionable. If I'd done it in 2009, it wasn't fashionable then, but obviously Asif Kapadia has done Amy and Senna, and Matt Whitecross made a great documentary on Oasis, Supersonic, where it's just audio interviews and archives, and that's suddenly a form that people are into. And I was like, well, thank God, because that's all I've got.

It's good for people to change the genre, especially documentary filmmaking, because otherwise it all ends up boring and the same. Michael Moore came along and changed everything. Asif has done exactly the same, and Nick Broomfield did it. It's good to have that kind of bomb go off under the medium every now and then.

AC: And it meant following the path of the KLF to the Isle of Jura. What was Bill's obsession with dragging bands to remote Scottish islands?

CA: It's really hard to get to. You've got to take two ferries - you've got to go Jura to Islay, Islay to the mainland, and I got stuck, because when the wind and the sea and the tide is up - and I'm a Londoner, so I don't know about nautical things. I got to Islay, and they went, "Sorry, the storm's up, you can't cross." I was like, "Yeah, but I'm media. Is there any special way? How do people get off?" "Well, you sit in the pub and shut up until the sea's calm." So I did that. There's a pub, so you're OK.

But Jura is this incredible, haunting place. It's obviously where George Orwell spent a lot of time, and you can see why. It's got this really dark, brooding atmosphere. about it.

AC: So much of the KLF's back catalogue is subtle variations on something else. The themes are recurrent, the beats are recurrent, the music is recurrent, and you can listen to a track and say, "Hang on, that's a throwback to "3 A.M. Eternal." They don't get enough credit for writing those variations, and how composition works, were you do subtle twists that create something new. Something like "It's Grim Up North," they basically invent noir rave and no one else can touch it.

If you look at their full discography, you can go, "Well, on one level they only had about four or five songs." Then, if you look at all the different versions, and they put out version after version after version of "3 A.M." and "What Time is Love" especially - I've got about seven versions of that. They'd only release them on a thousand records, then delete it, then remix that, so they would build it and build it. You can go back to the early versions of some of their tracks and you can hear the bare, bare bones of it, and by the time you get to the stadium house trilogy, they're reworked it so many times it's just this wall of sound.

They're technical geniuses. Even outside of the artistic compositions, the technicality of those records, nothing else was like it at the time.

It's funny, I've sort of been working on another documentary about the different elements of the rave scene, and most rave tracks are really, really poorly produced. They're just done on a synthesizer in someone's old bedroom. But the KLF had orchestras involved in theirs, or Extreme Noise Terror. They didn't have any boundaries.