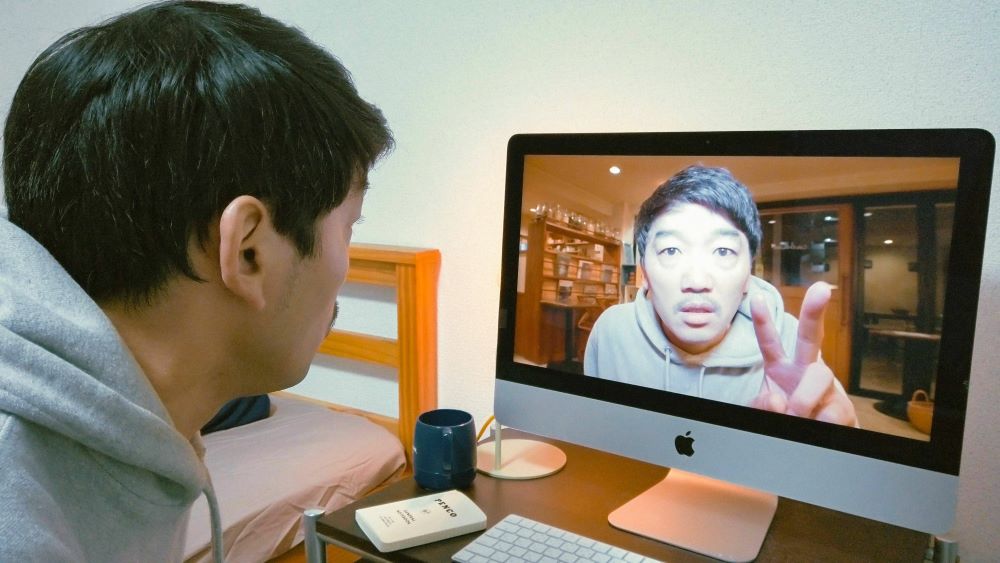 Beyond the Infinite Two Minutes

There weren't audience awards at this year's Fantastic Fest, but if there were it would have been the smart bet that the adorable, hilarious, and sweet sci fi comedy Beyond the Infinite Two Minutes would have come out on top. But its seemingly simple story hides some unbelievably disciplined filmmaking.

It's a simple story: a cafe owner finds that the computer monitor in his little diner is carrying the signal from the camera on the computer in his apartment. The only thing is that the apartment one is two minutes in the future, so he can talk to himself two minutes ahead or behind, depending which side of the link he is on. It's not enough time to change history, but it is just long enough for he and his friends to get themselves into trouble, running between the rooms.

But cute doesn't mean easy. Each scene had to be shown twice, lasting exactly two minutes, and fit together perfectly. Oh, and did we mention the whole thing is done as one shot?

With the film streaming now as part of Fantastic Fest's FF@Home, director Junta Yamaguchi dug into the complexities of making all those two-minute scenes fit together from both sides.

Austin Chronicle: I know [scriptwriter] Makoto Ueda's work from animation, from films like Night is Short, Walk on Girl, but how did you start working together?

Junta Yamaguchi: We're in a group called Europe Kikaku Group. Its a theatre group that every year makes a play, and within that group he works, not as an actor, but as a visual media director, and he's the head of all the scriptwriting. This film was actually made before the Covid pandemic in Japan, but even before that we'd been talking about making a first film within the group.

The group loves the concept of films that deal with time, such as Back to the Future and also Tenet, and Ueda and them wanted to make a sci-fi film with Ueda that dealt with that concept, which is what Ueda wrote the script with.

The concept of two televisions that are placed against each other in a time loop was originally done eight years ago with a film called "Howling" that was directed, actually, by Ueda, and that concept was expanded into the full script of Beyond the Infinite Two Minutes.

“We really did it in two minutes, and we very rigorously set the time. Even if it was one second off, it wouldn’t work.”
AC: You mentioned Back to the Future, and I have a friend who has a sliding scale for time travel films. At one end are films like Primer, that are absolutely rigorous in their temporal mechanics, and at the other end is Back to the Future, which is utterly unscientific but makes narrative and emotional sense. Where would you put Beyond the Infinite Two Minutes on that scale?

JY: I did it just like Primer example, in which we really did it in two minutes, and we very rigorously set the time. Even if it was one second off, it wouldn't work.

AC: That sets an incredible challenging for a director.

AC: You directed and were cinematographer and editor. I could see that you'd have to, because the story is like a bespoke Swiss watch, with so many precise moving parts that would be challenging to explain.

JY: Because it's two minutes that keep on expanding, it's something that's best if possible to be done in one cut. And not to be one cut to be, "Cool, we're doing it in one cut," but because that's the best way to get the story through, and to keep the emotional sense of the story to carry on. That's why I had to be camera operator.

In terms of the editing process, it wasn't actually done in one go - there are a couple of hidden cuts in it - but considering I was the camera operator, it's just a connection of the points that are hidden to make it look like it was one cut.

It's also a low budget film. If we were to bring in an editor and a camera person, it would cost money. But not only would it cost money, the problem is that we would have had to explain everything, and that would also be very complicated and time consuming, so it was easier just to do it myself.

AC: How much did you map it out beforehand? Because it's not just timing the dialog - there's a lot of running between locations. I can imagine the script was as much a time sheet as it was text.

JY: When Ueda wrote the script he wrote it with a stopwatch so he would know the time. But of course, when you're on the set, there's the distance between actors, there's speed of talking, and there's also speed of walking, going up and down. So when we were rehearsing we did that with a stop watch.

But initially, when the actors received the script, they didn't understand the story at all because of these aspects.

AC: There's also the use of a chalk board, where the characters stop to explain to each other - and the audience - what they think is happening with the TVs. It's such a simple, brilliant idea.

JY: During the location scouting, when Ueda found this location, there was a chalk board there that was being used to write the menu for the restaurant. Ueda picked it up and started using it, and we went, well, this would also be a good idea to be used in the film to explain the whole situation.

Beyond the Infinite Two Minutes is available now through Oct. 11 on Fantastic Fest's FF@Home virtual festival. Passes at tfantasticfest.com.