Fantastic Fest Review: Let the Wrong One In

This toothy farce from Dublin has gore galore and more 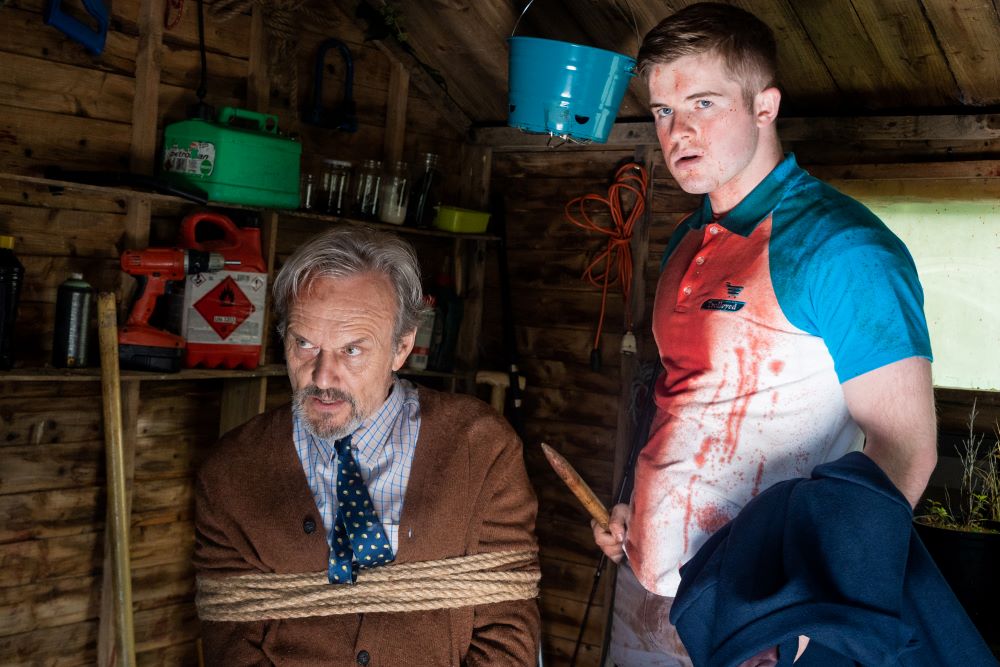 Let the Wrong One In

From the wink-wink, nudge-nudge title of director Conor McMahon’s broadly comic vampire melodrama-cum-familial fracas and the initially silly seeming setup, Let the Wrong One In treads a razor-thin line between being a splatstick gruegasm while also portraying a dysfunctional family that’s nevertheless bonded by blood.

Given the absolutely torrential fountains of crimson EFX that underscore the yuks (yucks?) and the end credits shout out to “incentives provided for the Irish Film Industry provided by the Government of Ireland,” you have to wonder if the Government read McMahon’s script in advance. Cheers to them if they did.

Mixing horror with humor is a notoriously risky filmic gambit. When it works, as with John Landis’s stone classic An American Werewolf in London, Peter Jackson’s Dead Alive, or even Matthias Hoene’s oft overlooked Fantastic Fest 2012 entry Cockney’s vs Zombies, there’s almost always at the very least a dollop of heart to ground the characters and their suddenly bitey urges — however vexed, perplexed, or just plain ravenous by whatever Maria Ouspenskaya-esque curse has befallen them — in an emotional maelstrom. Let the Wrong One In struggles early on to find its footing in that regard, but it eventually succeeds as the third act finally jells and even ends with a wicked bit of black humor that elicits a genuine and well-placed guffaw.

Sixteen year old straight arrow Matt (Karl Rice) lives with his mother (Hilda Fay) in north Dublin. His older brother, Deco (Eoin Duffy) is persona non grata in the household, a junkie banished by Ma due to his thieving nature to support his partytime lifestyle. After Deco’s bitten by a shady vamp (who also turns a hen party quartet of pre-nup revelers), he crawls back to the family home, flesh smoldering in the sunlight, and begs his estranged younger brother to help him. Matt notes Deco’s aversion to sunlight, along with his inability to show up in mirrors, and those extending canines and states of obvious to his panicked and partied-out sibling: he ain’t heavy, he’s a vampire, all the while dodging their grudge-holding Ma.

In a brilliant bit of casting, Henry (Anthony Head, Buffy’s Giles) arrives on the scene playing the head of a group of cabbies hot on the bloodsuckers trail, a modern day Van Helsing minus Edward Van Sloan’s panache. He enlists Matt as his protege in a crusade against the growing number of bloodsuckers who are led — shocker! — by Sheila, Henry’s betrothed whose newfound vampiric freedom has her reconsidering a life spent with the elder Henry in favor of the fun of exsanguination. Deco, meanwhile, struggles against his newfound primal cravings only to discover his own on-again, off-again paramour is just dying to join the ranks of the undead. What’s a recovering junkie-turned-vampire to do?

While Let the Wrong One In is all over the place in terms of its comedic elements, with some gags working triumphantly while other fall flat fast — how much firehose bloodspray does one film need? — the unspoken subtext of the hapless Deco forced to trade on addiction for another is worth noting amidst all the other chaotic plot threads. I have to admit that the downright wacky denouement, which brings the lost boy Deco back into the familial fold, is a mini-masterpiece of surreal, borderline Monty Python-esque anarchic lunacy involving — spoiler alert! — a bloodthirsty bunny. It may not be to everyone’s taste, but somehow Let the Wrong One In left me smiling.

Let the Wrong One In
World premiere
Friday. Sept. 24, 10:35pm at Alamo Mueller