Band biography that burns Behind the Music to ashes 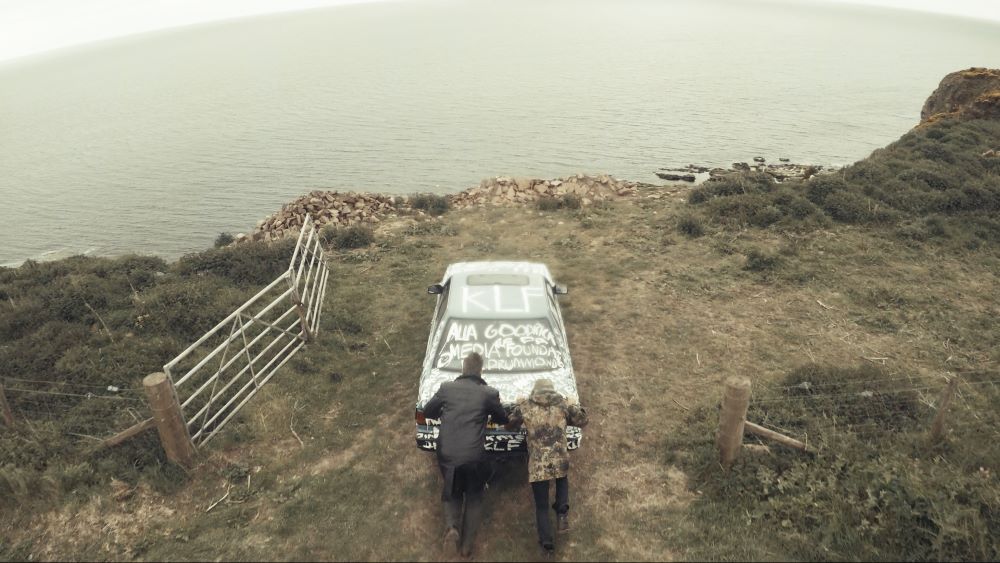 Who Killed the KLF?

Who killed the KLF? The KLF. They were the only ones who could do the job. And it had to be done.

What is a KLF? A Dadaist nightmare disguised as a chart-topping ambient house duo who recorded with queen of country Tammy Wynette, earshredding grinders Extreme Noise Terror, and a 1968 Ford Galaxie called Ford Timelord. The KLF (aka the JAMS aka the Justified Ancients of Mu Mu aka the Timelords aka the K Foundation aka 2K aka K2 Plant Hire Ltd) dominated the European singles charts between 1987 and 1992. Former music A&R man Bill Drummond (King Boy D) and guitarist Jimmy Cauty (Rockman Rock) wanted to burn the music industry to the ground, or build it back up to its purest instincts, or maybe do both. Their weapon? A sample-driven dance band that both revived and throttled rave culture, doused it in agit-prop and art terrorism, and set it alight with party sparklers.

The KLF were undeniably a cornerstone of the British rave scene, but they were equally a critique of Blair-era culture, of commercialism, of the commodification of art, of celebrity status. Pre-KLF, Cauty may well have been half of comedown kings the Orb, and sleazed around in grebo rockers Zodiac Mindwarp and the Love Reaction (oddly, facts glossed over here in favor of his abortive cellophane pop act Brilliant), but his most famous work was a closer kin to the provocative comedy of Chris Morris, or the art rock of Manic Street Preachers. No surprise, since they were all born of frustration at a celebrity system that sanitized everything it touched.

That could be why their story attracted Chris Atkins, whose 2009 documentary Starsuckers eviscerated the grisly and unethical reality of tabloid journalism. Who Killed the KLF? digs into the history of a band that didn't break rules in the conventional way, but innovated self-destruction - and got rich doing it. So rich that they famously burned a million pounds on a Scottish island (or did they? Yes, yes they did) for reasons that they didn't explain at the time. Or, rather, they did, but no one wanted to listen. Those are the kind of contradictions that Atkins does a better job than most could ever manage in threading together.

Yet that's still a challenge, because what Cauty and Drummond were trying to achieve was so tinged with fury and despair that it's still hard to explain. When Alan Moore is the most coherent and incisive voice on the Discordian roots of a pop band, you know you're in fascinating trouble.

Atkins doesn't try to create a straightforward thematic narrative, because what the KLF did is not straightforward. Instead, he concentrates on the linear path, because that's what keeps the story under some kind of control, even if the entity known as the KLF was throwing money at deranged videos and maniacal stunts as fast as they were earning it. That's how he manages to get some insight into Cauty and Drummond's complicate relationship with the band, which increasingly became an independent organism even though they were the only members, managers, everything.

Of course, in the midst of this Atkins finds space for the KLF's riproaring discography (the same back catalogue that they deleted for 29 years), and no one can deny that "3 A.M. Eternal" and "What Time is Love?" are still hard pumping floor fillers. Again, if he'd taken a more thematic approach, there could have been more dissection of those bizarre inner tensions within their music. Early track "The Queen and I" sampled ABBA so heavily that it makes Dangermouse's The Grey Album sound like a tune banged out by a man who looks both ways twice before crossing the road: at the same time, everything the KLF did sounded fresh, the brilliant idiocy of "It's Grim Up North Part 1" harder and more danceable than any supposed chart banger. Maybe a musicologist could dissect those elements, but Atkins keeps his eye on the men and their actions, not the beats.

It's the same with the KLF's mythology, a jumble of pyramids, cloaks, trains, Vikings, constant rain, and tattered pages ripped and from a marked-up copy of The Illuminatus! trilogy. Explaining it would be worthless, when getting it is what counts.

Ultimately, Who Killed the KLF? is not about the obvious answer (Cauty and Drummond, guilty on all charges) but on why they had to die, and how they're not really dead. Atkins unveils the KLF as a divine mystery that can only be told through obfuscation.