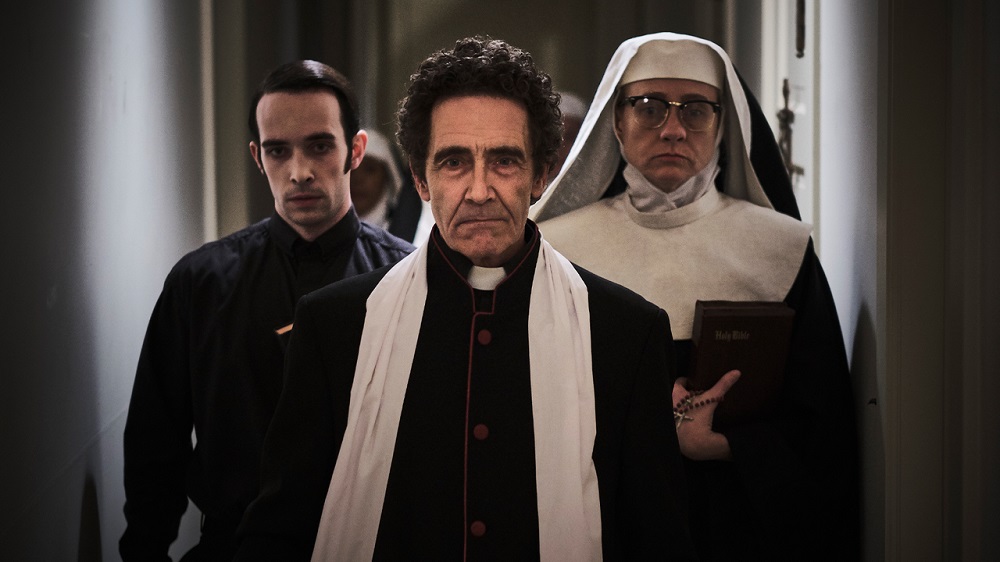 I will admit, the fact that Oklahoma oddball Mickey Reece had recently become the cinematic flavor of the month left me cold and baffled, especially with his breakout festival hit Climate of the Hunter. Yet the excellence of religious chiller Agnes finally means you can mark me as a true believer.

It wasn't that his stylistic flourishes weren't deliberate or considered: it was more that they felt like bows on an empty box. That's not an accusation that can be leveled at Agnes, a strange and beautiful tale of sex, religion, and dysfunction at the Carmelite convent of Santa Teresa.

"That was dramatic," says priest-in-training Benjamin (Jake Horowitz), a visitor to this remote and reclusive community.

"It has to be," retorts laconic burnout Father Donaghue (Ben Hall). "It's an exorcism."

Reece's grand target in this film is faith, in its impossible entirety. Who believes, who feigns belief, who uses it for power, what happens when it collapses - and he burns all those issues up in the crucible of an exorcism, whatever that contested and subjective word means. Definitive answers are not the goal in this meditation, but instead an insight into the flawed and desperate, the pious and pompous.

There's a cold sweatiness that pervades Agnes, set as it is for much of its duration in that sealed bubble of belief. Meanwhile, long-time Reece collaborator Nicholas Poss's score is all grinding gears and scraped strings, cutting across the line delivery to perpetually unsettle. Any quiet time is false hope, as Reece pulls the rug out from under expectations - not with simple trickery, but through exquisite misdirection. A radical gear change, heralded at many levels - a change of time, of perspective, of style, even of protagonist - could initially seem jarring, but it's vital to Reece's bigger point. He may have been dubbed the Soderbergh of the Sticks, but this places him closer to the sometime scathing introspection of Onur Tukel. However, either comparison misses that Reece is unique, and by harnessing all his idiosyncrasies Agnes is his the most assured work yet.

Fantastic Fest 2021 runs Sept. 23-30. Tickets and info at fantasticfest.com. Follow all our coverage at austinchronicle.com/fantasticfest.