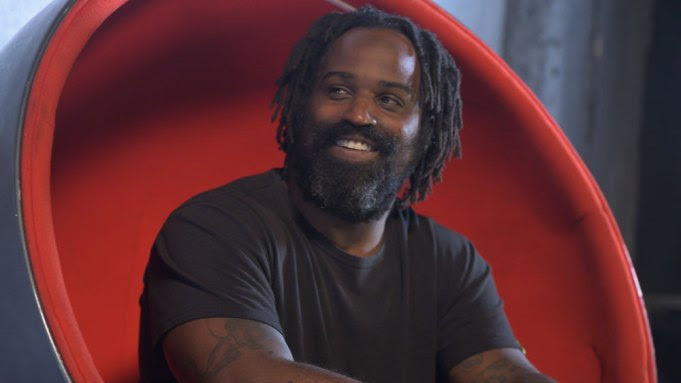 Ricky Williams, the Heisman-winning Longhorn who quit football to concentrate on his mental health, will be the subject of a new live action biopic. (Image Courtesy of Modern Magic)
From Michael Phelps to Simone Biles and Naomi Osaka, athletes have been increasingly willing to talk about their mental and emotional health. When Ricky Williams – the Heisman-winning Longhorn and NFL vet – quit football, it seemed like a mystery. Now a new biopic will explain what happened.

The untitled film will focus on 2012, the pivotal moment in the University of Texas at Austin alum's life where he suddenly walked away from an 11-year career as a running back in the NFL and Canadian Football League. What was not known or discussed at the time was that he suffered from social anxiety disorder, which explained his habit of doing TV interview with his helmet still on. While that became a running joke in sports' circles, it was an indicator of the deep issues plaguing Williams at a time when athletes were just supposed to tough it out.

The live-action project was announced yesterday by Los Angeles production house Modern Magic. Williams is cowriting the script with former Late Show with David Letterman writer and producer and Spider-Man: Into the Spider-Verse writer/director Rodney Rothman, who is also producing the film. Williams said, “It’s been exciting working with Rodney on telling the story of the most magical and transformative time of my life, when I became more than just an athlete. My hope is that people will be inspired to pursue their own unique paths.”

Rothman added, "Fifteen years ago I read about a Heisman trophy winning NFL player named Ricky Williams who'd abruptly quit the pros in his prime and vanished. Nobody knew where he was. Nobody knew how to find him. Months later he was discovered living in a tent in a backpacker's commune in Byron Bay, Australia, undergoing a strange and transformative experience. He's a special person, and I'm honored he trusts me to help tell the story of his moving, funny, one-of-a-kind journey, involving Buddha, Kali, Jesus, Marley, football, parenthood, Julie Andrews, Lenny Kravitz and everything in between."

The news comes in a big week for Williams. At the request of the family of late Longhorns booster Joe Jamail, the Joe Jamail Field at the University of Texas Darrell K Royal Texas Memorial Stadium will officially be renamed at a ceremony in honor of Williams and his fellow Heisman winner, Earl Campbell, and will officially be known as Campbell-Williams Field.