Q&A: Sealed Room Terror in We Need to Do Something 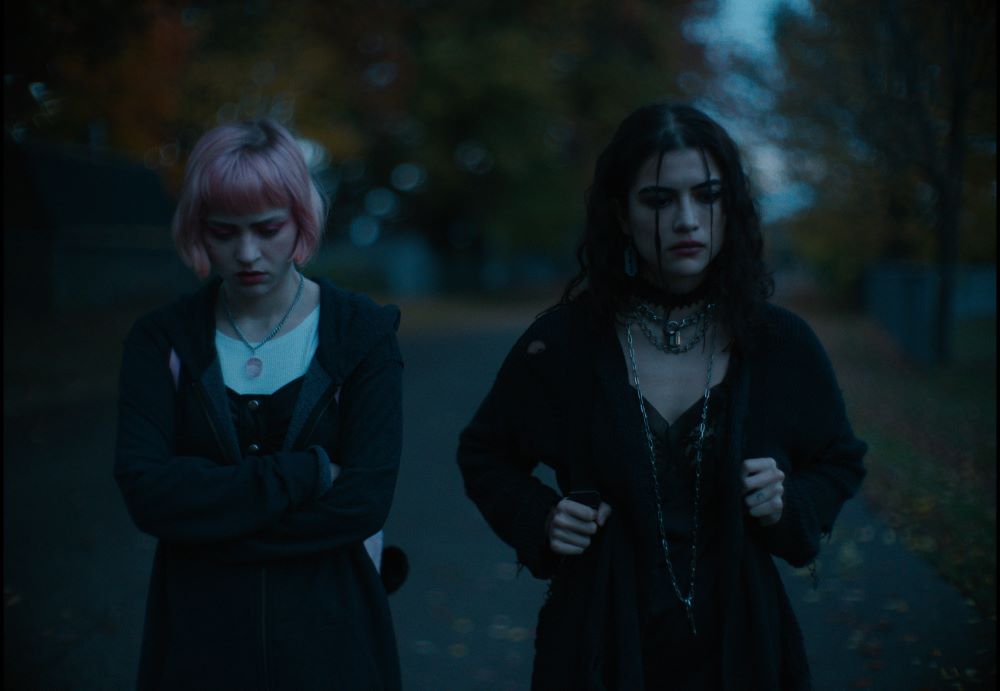 Before the storm: Sierra McCormick as Melissa and Lisette Alexis as Amy take a last step in the world in We Need to Do Something, directed by Sean King O'Grady and written by Max Brooks III. (Image Courtesy of IFC Midnight)

Whatever you do, if you watch We Need to Do Something, do not repeat the supernatural incantation that slips through a character's lips. "It's a real spell," writer Max Booth III warned.

The grimoire in which Booth found his dark magick isn't the only book behind his new sealed room horror, in which a shattered family (Pat Healy, Vinessa Shaw, John James Cronin, and The Vast of Night breakout star Sierra McCormick) is trapped in the bathroom of their home after a storm drops a tree on the door. But the peril within may be matched by something that is lurking outside, and what does it have to do with daughter Melissa’s friend, Amy (Lisette Alexis)?

San Antonio resident Booth adapted the screenplay from his own book of the same name, but it was the script that hooked director Sean King O'Grady. He said, "I'd never read something that gave me a jump scare. The first time I read it, I absolutely jumped out of my seat."

Austin Chronicle: You've adapted your own novel here: what was the process?

Max Booth III: This project was strange because I wrote it initially as a screen play, but I had no representation, I had no contacts into the movie industry, I didn't know what to do with it. I wrote to one indie company - they did not respond, shockingly enough - , so I just sat on it for a while. I just got impatient and thought, "I know how to do books, so I'm just going to rewrite this as a book."

I think it was a good thing I wrote it as a book because so many of the elements and the storyline changed. The original screenplay didn't have anything supernatural in it because I was so focused on, "Oh, it has to be so restrained because of budgets" even though I knew nothing about budgets. Rewriting it as a novella gave me some freedom to have a little fun with it.

Then later on I was able to obtain a film and TV manager, who read the novella and encouraged me to rewrite it again as a script because he thought he could sell it. That process was pretty easy because I had already written it with a movie in mind, so most of it is pretty cinematic despite it being in one room.

AC: So, Sean, did you read the book first or the script?

“It’s not a pandemic movie [but] our cast and our crew related to the story because we’d all been through six months of isolation, and this fear of what’s outside the door.”
AC: Max, was there any temptation to just reuse the original script?

MB: It needed a fresh script. The original was like a skeleton outline of a novella, and it kind of made me realize that maybe I should try writing novels as screenplays, just to get the basic outline down. It really helped with the novella.

AC: I've talked with a lot of filmmakers over the last year about getting a movie made in the pandemic, and people just go, "Oh, just get four actors and a crew, stick 'em in a pod, put 'em in one room, it's really easy." And the response is "No, it's not easy, and it's never easy. Sealed bottle scripts are a very specific challenge.

SKO: Before the script was sent to me, I was looking to make something with the resources that I had at my disposal - a camera, lights, space. So I was writing something to fit what I thought was possible to pull off at that time. At that point, nobody had left their house or their apartment in six months, so I knew it had to be a small cast, and I knew it had to be relatively limited locations, and this script hit my inbox and just blew me away.

Maybe I was naive, but I was only looking at the advantages. I knew we could do this, I knew we could do it safely, and I thought that other people would be on board to do it with me. ... I feel kind of awful when I say this, as a lot of horrible things have happened over the course of this pandemic, but it also offered us some advantages at that time, which is that people were available, and wanted to work. Nobody had really done anything, and this script was something that everybody felt could be achieved. And, also, while not a pandemic movie - as I would have no interest in making a pandemic movie - I think our cast and our crew related to the story because we'd all been through six months of isolation, and this fear of what's outside the door."

The challenge of doing a sealed bottle didn't really hit me until we were actually rehearsing with the cast. To do that, we would do it Dogville-style. We'd lay tape out in the basement of our office, and have the cast rehearse within the framework of the set. It was very helpful, and we actually ripped up the entire shot list of our movie.

AC: And now, with the film releasing just after Hurricane Ida hit, the fact that they're sealed in the bathroom because of a storm has an extra weight.

SKO: At first, when I was reading the script, I thought I was reading a natural disaster script until it becomes much more. For whatever reason, we're more cognizant of natural disasters happening. There have been more storms than ever since we've made this movie. I live in Michigan, where we never have tornadoes, and there's a tornado warning once a week. Between Max, our editor (Shane Patrick Ford), and myself, we've sent pictures of trees that have fallen and landed on people's houses and broken through their roofs. I don't remember this happening so I'm pretty sure that, by making this movie, whatever Max had conjured up in the words we activated.

AC: So was it a real bathroom or a set?

SKO: It was a set. Our production designer, Amy Williams, designed it and it was incredible. When you were in the bathroom it felt like a real bathroom in every way. The only thing was that the toilet didn't work.

AC: You also had the advantage that the bathroom was one of those gorgeous Midcentury ones, where there was plenty of space to shoot.

SKO: We built the bathroom to have similar architectural elements to the real house. So when you see the exterior of the house in a couple of shots, the neighborhood where we shot it, it was all these beautiful Midcentury homes. That home itself where we did shoot some scenes belonged to the architect who built the whole neighborhood, and so that house had a really interesting bathroom.

We wanted to make sure each character had their own turf within the bathroom, sort of a corner that they could go to. We kept saying that the bathroom seemed big, and then it seemed small, and then it seemed big again, and once you had a camera in there, and you had a team, and you're trying to do camera moves with your actors, the bathroom felt incredibly small. We had a couple of removal walls, but that part of it was not simple. It was small, it was confined, but I think our DP did an amazing job of capturing it and making it look beautiful. It was claustrophobic enough, without making you feel you're staring at the same thing all of the time.

AC: Did you ever have to remind anybody the plumbing wasn't real?

SKO: Max in particular, sometimes. I don't know what his deal was.

MB: I did go twice, secretly, and I don't know if they found it. This was the first movie set I was allowed on, but going forward I will use the bathroom in a place I'm not supposed to. That's going to be a bit I'm working on.

We Need to Do Something opens this weekend. Read our full review and find showtimes here.

We Need to Do Something, IFC Midnight, Max Booth III, Sean King O'Grady