Terror and terabytes create a new vision of possession 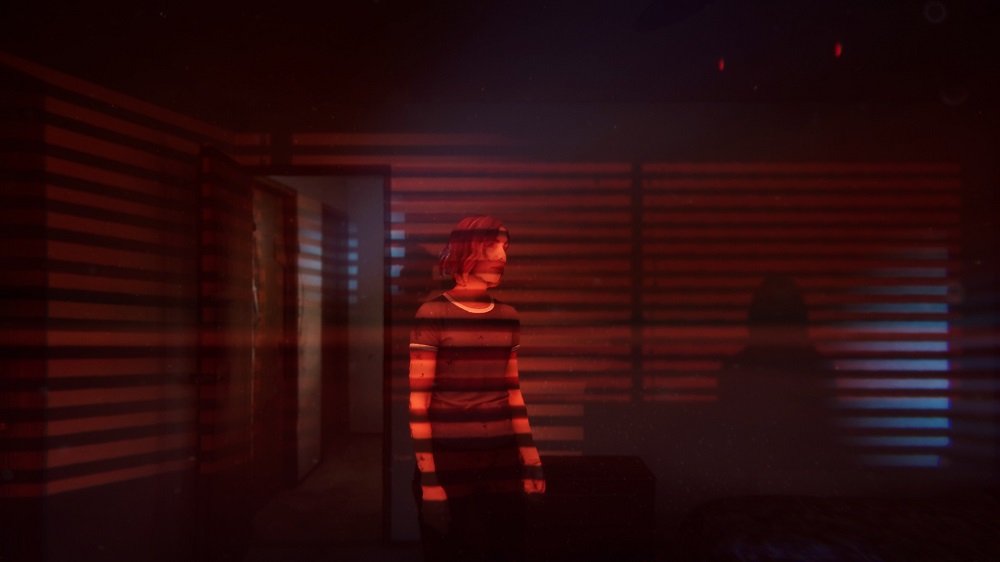 Unreal estate: Carly Pope walks through a simulation created by photogrammetry in Neill Blomkamp's Demonic but she's not real either, having been replicated and inserted into the screen through the new technology of volumetric capture (Image Courtesy of IFC Films)

The supernatural and technology seem mutually exclusive, divided between faith and logic. But fusing the two was exactly what Neill Blomkamp envisioned for his new horror, Demonic. He said, "I love the idea of modernizing the Vatican exorcist horror into something more of a Google, Silicon-Valley, trillion-dollar organization."

Yet the tale of a woman (Carly Pope) being used to access the catatonic and quite possibly possessed mind of her mother (Nathalie Boltt) through a VR program doesn't just depict cutting edge simulated reality, but depended on it, and was shaped by it.

Blomkamp was scheduled to attend an early screening of Demonic today at AFS Cinema, but will be unable to attend due to the pandemic. So, instead, the District 9 and Elysium director talked with the Chronicle about developing the project, and the cutting edge simulation technology that made the film possible and gave it such a distinctive look.

Austin Chronicle: You've spent the last few years doing experimental work in shorts through your production company Oats Studios. What made Demonic stand out as a feature idea?

Neill Blomkamp: To be honest, that wasn't really the process, because everything to do with Oats is meant to never touch Hollywood. They're not meant to be feature films, ever. I mean, you can do 40 minute shorts, or 1 hour and 13 minute minute shorts, but they're never meant to be extrapolated as feature films, ever, and they're only meant to exist online. So Demonic and the production company that made it is very separate from Oats, and my brain wasn't really linking those two things together.

More what was happening is that I've always had an obsession with these filmmakers that go out and self-finance something and shoot it in the woods, like The Blair Witch Project and Paranormal Activity. Even pre-Oats, like 10 years ago, I remember wanting to do that - just get some people together, make something, and see how it turns out. When the pandemic began, it was a perfect time to resurrect that idea.

But I didn't have a concept of what the story was. I had all these fragmented elements of different things that I wanted to do, and one of them was wanting to use volumetric capture. But I didn't know how to do it, because the technology is so glitchy and so early that, unless it was written into the story in a way that it was sort of prototype-y, the audience would reject it. You couldn't pass it off as proper VFX. You'd have to work it into the story somehow. AC: So what was the learning curve of being an early adopter on volumetric capture for features?

NB: There's a concept in computer graphics called photogrammetry, which is the carpet bombing of a real-life object with thousands of still photos, and then using software to extrapolate a three-dimensional object. It's smart enough to take all the photos and figure out what is the subject that is being photographed, make a CAD model of it and then - and this is the part of it that I love - also use the textures that were in the photos, the colors of it, the shadows, everything comes together. So if you look at it on a computer screen it looks like a three-dimensional object you can hold.

Volumetric capture is that happening 24 times per second.

AC: You make it sound so easy.

NB: There's a relative simplicity to it, for sure, but it's wildly different from motion capture. Even if it looks on the surface like it's similar, they have absolutely nothing to do with each other. In motion capture, you bring your actors out with small infrared reference dots all over them, and you pull the motion off them and put it on to a different creature or whatever you've built. Volumetric capture, your actor would come into the stage in hair and makeup and costume, like a stage play, and they would be three-dimensionally gathered and now exist as basically three-dimensional video.

“We ended up with about 265 cameras that were 4K, outputting 12 to 15 terabytes at the end of each day.”
The problem is that, as the cameras are put further away to allow the actors to move ever so slightly, the resolution drop-off is exponential. That's what leads to the drop-off, because the computer can't put the pieces together correctly because it doesn't have enough data because the cameras were a meter away. To fix it you can bring the cameras in but then the actors truly can't move. So when they get around that, either with higher resolution cameras or with some other piece of technology that isn't around yet, it's going to be pretty revolutionary. ... When you're able to see individual hair strands, it's going to be pretty cool.

I just love that as a piece of technology, and I really wanted to use it in a film somehow - it's also so early that it would just be cool to do something with an experimental technology. So I started speaking to a company in LA called Metastage - they're awesome and I'm a huge fan - but when the idea for Demonic came about, when the pandemic hit, we couldn't set actors to them. I couldn't even go to them because I'm in Canada and everything's in lockdown, so Metastage wasn't an option.

So Chris Harvey, who's our VFX supervisor, found Volumetric Camera Systems in Vancouver, and they built the rig for us, and that's how I really started to learn about what was required.

We ended up with about 265 cameras that were 4K, outputting 12 to 15 terabytes at the end of each day, and that took months to crunch into three-dimensional models of Carly and of Nathalie, and then those were given to a company called UPP in the Czech Republic, which treated it like visual effects from that point.

AC: I hate to think what your server farm looked like.

NB: It was honestly hilarious, because when people do volumetric capture, they're doing it usually for AR for apps. There's not that many uses of it yet. So to have 15 minutes of it in the movie - and that's after it's been edited - Volumetric Camera Systems was not ready for the sheer volume of data coming in. Based on earlier precedents, we were an order of magnitude greater in every way.

So what ended up was that my brother (Mike Blomkamp), who was the executive producer of this small production company that we had and also of Oats, had to drop off 24 of our own computers at the end of the first shoot day, to help them be able to save data to be able to shoot at 8am. 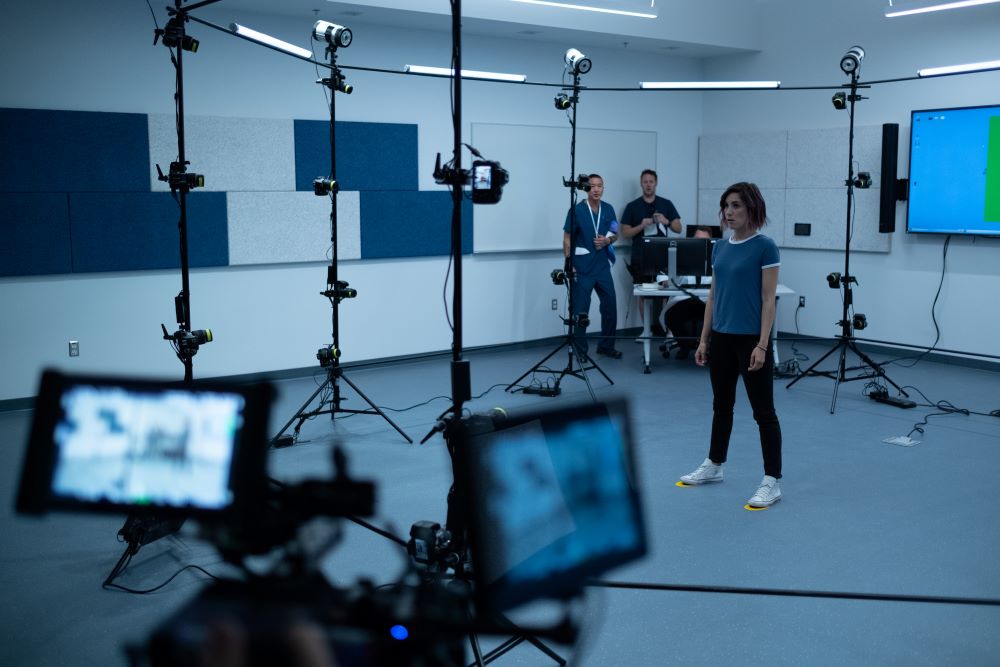 Star Carly Pope and director Neill Blomkamp in the volumetric capture stage for Demonic, out this week from IFC Films (Image Courtesy of IFC Films)

AC: The end result is a very unique look, and looks within looks that serve the story. So often you see films set in a simulation, and everything looks the same. Here the buildings have this translucent, almost Andrew Wyeth feel, while Cody is glitching, like the software is struggling to keep up with this unpredictable interloper.

NB: Creating the environment is what I was talking about earlier with photogrammetry, which is the capture of an object as a single, static object. Think of Carly over one second as 24 separate Carlys that are flash-frozen in time.

The locations were about 12,000 photographs per location. You'd use drones following guide points to shoot a grid, and on the surface level you'd stand with still cameras, and carpet-bomb the whole thing. So when they were turned into three-dimensional objects, their resolution was far greater than what volume capture was doing with the actors, just because of how much time we could put into doing one frame. So what that meant was there was a crispness to the geometry that the volume capture didn't have.

We actually broke the architecture models on purpose, we downgraded them to get them closer to what the actors looked like. But we didn't do it resentfully. I loved the look of this lo-fi, broken geometry, and I wanted to be more crunched down, but if you wanted it to get to the same polygonal level it was too broken. So they're sharper models than the actors, but still not as sharp as they actually came in.

My favorite shot of the whole movie is the first simulation that she goes to, of her childhood home. It's shot subjectively from her POV, and those are the only handheld cameras in the movie, which are in the simulation - everything in the real world is on Steadicam or dolly. When we're with her in the sim it's handheld, but when we go to what the doctors are watching, we see it from an orthographic, god's eye view of what she's doing, and that's my favorite shot in the movie. ... It's just an angle that I've never seen on film before, but the character looks real. You can tell that's a human walking around, but it's crushed down, like The Sims.

Demonic opens in cinemas this weekend, with a special preview screening at AFS Cinema on Wed. Aug. 18. Find our review and showtimes here.