Coven comedy where the witches are just like us. Dorks. 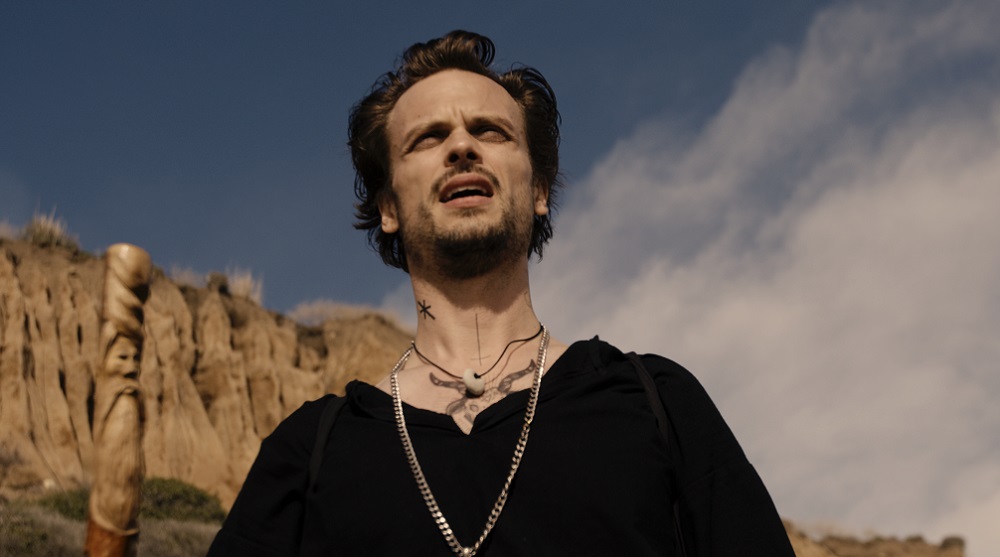 With films like the grisly Excision and violent social satire Tone-Deaf, Richard Bates Jr. has a reputation as a provocateur. But even if he newest film, King Knight, seems softer he doesn't see it as that great a remove. "It takes place in the same kind of heightened reality as my other movies, but this one's more farcical."

The pagan comedy, which premieres today at the Fantasia International Film Festival, follows the vision quest of Thorn (Matthew Grey Gubler), head of a delightfully goofy coven who turns out to not quite be the person his fellow witches think. The trigger for the revelation and soul-searching is the message every outsider dreads: an invite to his high school reunion.

That sense of awkwardness and comedic contemplation is something Bates admitted was familiar from his own reunion experiences, and having to explain to people who he hasn't seen in years what he does now. "A successful director where I grew up would be making The Rock. So anyone who know me from my childhood thinks I've gone insane, watching these films. There was this feeling at my high school reunion that was kind of like, 'Wait, what? You're making movies about what? What?' 'Yeah, I'm living my dream, and I'm really happy.'"

Austin Chronicle: What was the inspiration to make a comedy about modern witches?

Richard Bates Jr.: Everything was so ominous and dark, politically, after I finished Tone-Deaf that I didn't want to do something dark and live in that, so I wrote a movie to make myself happy that would hopefully make other people happy. ... When I'm going back to movies that make me happy, the sweet spot is '90s John Waters, and that movie Pecker. I love that movie, I've seen it countless times, and it's perverted and it's provocative and it's silly, but it's so fucking sweet. So the idea was keep this movie in the same version of reality as my other movies, but completely strip it of cynicism.

“If Nickelodeon remade Holy Mountain” – Writer/director Richard Bates Jr. on his new pagan comedy, King Knight
I was actually pitched a witch movie, a direct-for-hire thing, which I'd never done before. Not that the script was bad or anything, but the witch was not the protagonist and I was trying to figure out, why would I do a witch movie? Well, they'd be the protagonist in my movie. ... But while I wanted to have fun with everything, I didn't want to be insulting. So I had friends who are witches read it. I did a lot of research, and I tried to make it so everyone was in on the joke, and I discovered they were a lot more self-aware and fun than when I've had a Southern Baptist look at a script.

The point of the movie is that I'm not trying to treat them with reverence or in a holier-than-thou way as if I'm preaching. I just wanted you to see them as normal people, the way I would treat any characters in a comedy.

AC: Tone-Deaf was so sardonic: how did you find switching gears to something that's this much sweeter?

RB: That really appealed to me more and more. The interesting thing with Tone-Deaf is that I almost approached the characters as ideas more than people. Olive is the stereotype Harvey thinks she is and Harvey is the stereotype Olive thinks he is, and at the end they're both full of shit. With this, I just wanted to write human beings again.

There's an aspect of most of the things I've written that they start as me writing a self-help book. ... When I was writing it, my wife and I were working on starting a family, so there's all that to it. I really want to make sure I'm the best man I can possibly be so I'm a good dad. I had a great dad, and I want to be one too.

AC: High school reunions are such a mainstay of American cinema: was it had to find a new space to say something fresh about them?

RB: It's kind of the cool thing about the whole cast. When I finished writing this, I'd been through this before and I knew there was no fucking way I'm going to go pitch this and get financing. So I actually used my own money and I had to take out a loan to finish it, but because I did that I had full control over casting. So there's not anyone in the movie I didn't want. I even negotiated the actors' contracts with their agents, and did all the paperwork, which I'd never done before. So I came up with this troupe of very like-minded actors who I didn't have to micromanage - I just give general direction.

So day one, we sit down and before we start rolling and I go, "Everyone? I don't care how ridiculous a line of dialogue comes across to you, or how preposterous a scenario is, you're not acting in a comedy. You are acting in Sophie's Choice. And they all just get it, and they all just get why that's funny. So then for act two I can go, "OK, right now I want you to picture if Nickelodeon remade Holy Mountain."