On Holy Ground With The Green Knight

David Lowery on the weight of carrying a mythic legacy 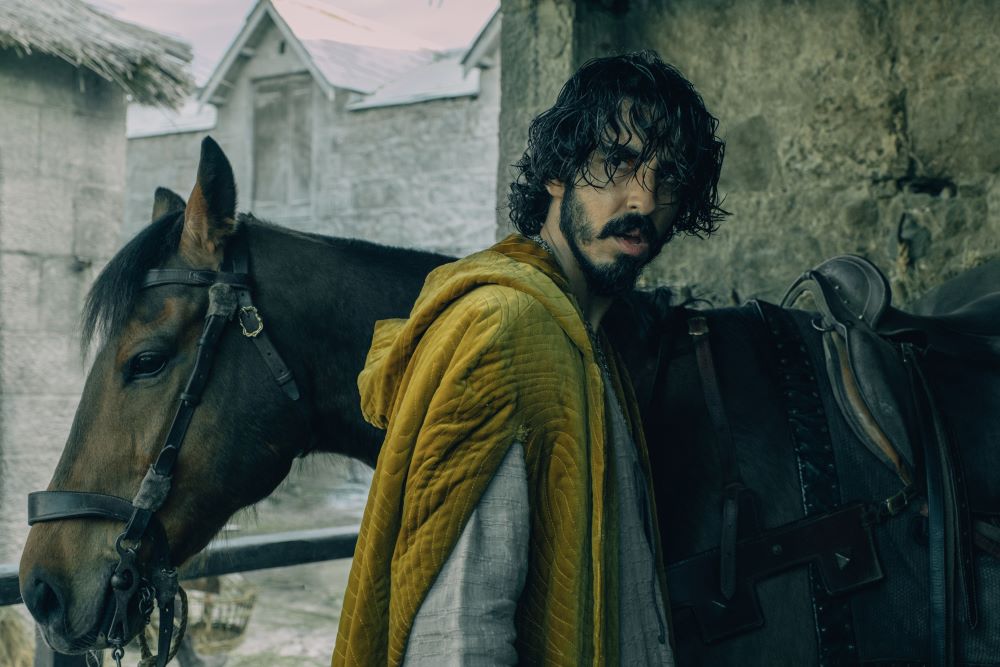 Dev Patel as Gawain in The Green Knight, David Lowery's adaptation of the 14th century epic poem (Image Courtesy of A24 Films)

Come at the king, as they say. The folklore of King Arthur have often been mangled by filmmakers, and David Lowery admitted he didn't immediately realize how much a poor adaptation could wound one of the great British myth cycles.

"I approached it with a headstrong attitude," the Milwaukee-born, Dallas-dwelling director of The Green Knight said, and it was only a conversation with actor Sean Harris that led him to understand the cultural place of the stories to anyone British. "For him, playing King Arthur was such an important step as a human being, as an actor, and as an Englishman, and all of a sudden I realized exactly what it was I was dealing with. The legacy and the reverence that he reminded me of in our first conversations, that was my first inkling of realizing, 'Oh, I need to tread to carefully here. This is something than I initially thought it was."

Not that Lowery was coming in to do some superficial Hollywood adaptation of Sir Gawain and the Green Knight, the 14th century epic tale of a young knight, Gawain (Dev Patel), and his fateful quest. Instead, he immerses himself in the text, casting only British and Irish talent, shooting in Ireland. "I wanted to leave the United States behind," Lowery said, but he realized that (like Gawain) he still had as further to go and more lessons to learn. "I dug into the history of it, and the analysis of it, and the degree to which people dedicated their lives to teaching it, it's something that, all of a sudden, I realized that I had to approach with a greater degree of reverence than I initially had."

Austin Chronicle: The casting of Dev Patel as Gawain has a particular resonance. The British Asian community is not often represented in media, and not only did you represent them but by casting Dev you write them into the mythology, affirming their Britishness, making them a part of this tradition.

David Lowery: I certainly didn't set out to reverse the wrongs of British colonialism. But I did, in retrospect as I was making the film, find it incredibly beautiful to see Dev in the milieu. I've spent a lot of time in the United Kingdom, and I'm certainly aware that is the largest group aside from caucasian. It's such a beautiful melting pot, and I love the idea of reverse engineering the mythology to include it. Everyone who feels themselves a citizen of Britain should be able to take part of the mythology of their country and their homeland. Regardless of how that became their homeland, that is part of who they are.

“I wanted to present a version of King Arthur that honors the legacy of all the legends that I grew up reading.” - David Lowery, director of The Green Knight
There's something so beautiful about having King Arthur and Gawain sat side by side, and having Arthur saying "It's so good to have family by one's side, one's blood," and to be able to have them say that earnestly and honestly, even though the color of their skin is different, it was very moving for me to see on set, and remains moving for me every time I see it on screen.

AC: There are details larded in here that, unless you're a medieval historian you're not going to get the importance of, even if you don't need them to understand the story. Like Guinevere's gown being covered in pilgrim's badges.

For my part, most of my research was focused around the poem itself. But then my collaborators – Jade Healy, who did the production design, and Malgosia Turzanska, who did costumes and came up with the idea of the pendants on the queen's dress, symbolizing all the places she'd been and the people who have brought those mementos to her, and every single one of those was intentional, every single one of those that was fastened to her gown has a story behind it – I am so lucky to have collaborators like that, who will fill in the blanks like that and give people the room to dig in deeper and look for meaning within the film. Because I do believe that meaning is all there.

AC: There have been so many different versions of Arthur's Britain, from Romano-British to High Medieval, with everyone in plate mail all the time. Your version of Albion is a very specific vision, one balanced between construction and corruption, which is a major theme within the original poem.

DL: I love the ebb and flow of civilization. So I wanted Camelot itself, when you come through those doors, to represent something that is forever in progress. The buttresses are being supported, the cranes are lifting up new beams to augment the castle that already exists, but King Arthur himself, when we enter the great hall and lay eyes on him for the first time, we see a monarch who is nearing the end. ... In the script it says that when we first lay eyes on King Arthur we are seeing a king in the waning days of his reign, and I wanted to capture that while also suggesting that everything he begat will continue on, for better or worse, after he is gone.

I wanted to present a version of King Arthur that honors the legacy of all the legends that I grew up reading – whether it was the children's books, or when I read Le Morte d'Arthur in high school, or just digging deeper into all the history of the canonical texts, the Post-Vulgate Cycle. I wanted to find an Arthur who had just passed apex of being a legend, and sees the waning days of civilization. And when Sean came in to play that part, he complemented that. I could go on for hours about how we enriched the character together.

“We wanted that British weather. ... We wanted that hail, and the mud, and the sleet, and the cold.”
AC: You hit on something there when you talk about Camelot in progress. When people say, "Oh, this cathedral took 500 years to build," what they really mean is that it took 20 years to build the original Romanesque structure, then 50 years later someone goes, "You know what? This would look lovely with a new Norman apse."

DL: I love the idea of architectural palimpsests, where you have an original structure underneath something that otherwise feels brand new. I love the history contained therein. In that one shot where Gawain is passing under the front gates, I wanted to suggest that and I wanted to embrace that.

AC: Two truths you caught about the British isles were mud and rain. You spend a lot of time in dirt and forests, and this isn't the amendable forests of Pete's Dragon. It always looks two minutes away from hypothermia.

DL: We wanted the wildness of Gawain's environment to encroach upon his journey in the most profound and hostile way as possible, and we were heartbroken to discover springtime came early that year. So we managed to make the movie as cold and rainy and muddy as possible by the skin of our teeth because, more often than not when we were shooting, the sun would just magically come out, and two or three rainbows would manifest on the horizon. We had at least one shot where we had to paint out the rainbows, and we had one day where we had to bring in a rain machine to get the rain. For some reason, whether it's climate change or just dumb luck, we had the most clement weather imaginable when shooting this film.

We had one day - it was the scene with Barry Keoghan where they're crossing the battlefield - the most amazing storm blew in. It was everything we could have possibly wanted. We did one rehearsal, we were ready to do a take, we got halfway through, and the horse got stuck in the mud. So we went back to the start of the track, and as soon as we went back the weather cleared, the clouds parted, a rainbow manifested, and the sun was out for the rest of the day, and we were just heartbroken.

The Green Knight from A24, starring Dev Patel and directed by David Lowery, is in cinemas now. Read our review and find showtimes here.