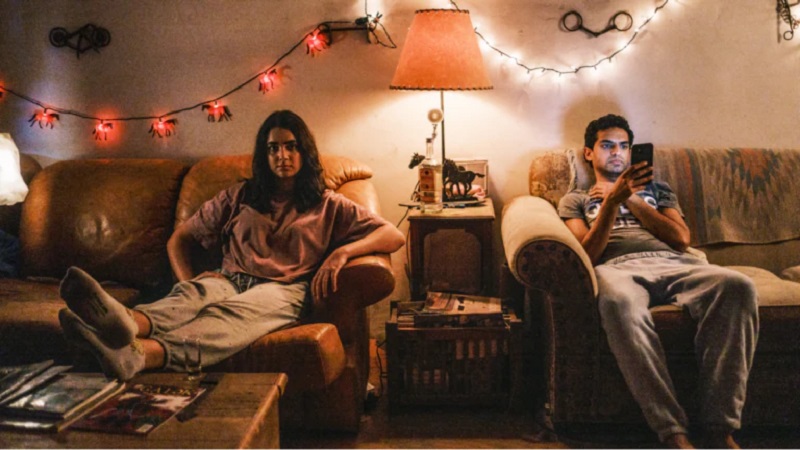 Say "arranged marriage" and there's an automatic gut reaction from a lot of audiences, riddled with visions of child brides, loveless partnerships, and the death of romance. Some of that response comes from racism, and some from a lack of depictions of what the process even means. So here comes wonderful, witty romcom 7 Days to fill that gap.

Director Roshan Sethi throws Ravi (Karan Soni, who co-wrote with Sethi) and Rita (Blockers standout Geraldine Viswanathan) right into the maelstrom of the classic rom com awkward date. It's pretty clear from moment one that it's going pretty much nowhere, even if they work hard to keep up the facade that they've both built up (and had built up for them) through the series of video interviews and exchanges between them and, most importantly, their mothers.

Sethi and Soni's script immediately demystifies the modern arranged marriage as being sort of like e-dating but with your parents having your passwords. Yet they also re-enforce the on-ramp for non-Indian audiences by filtering the whole experience through the lens of an all-time classic rom-com: When Harry Met Sally. The duo are forced together, and then stuck with each other due to a narrative obstruction. For Meg Ryan and Billy Crystal, it was that getting-to-know-you road trip. With Ravi and Rita, the date of their date gives everything away: March, 2020. When they go back to her apartment to shake hands and never see each other again, automobile mishaps and the California shelter-in-place order strike, and so they're forced into unwanted cohabitation. It's clear that neither's profile was accurate: Nebbish researcher Ravi is a very traditional guy who is looking for a traditional girl, but his e-presence overpromised and underdelivered. Rita's profile wasn't exactly on the level either, but that's mainly because of a few things she was keeping to herself. Being stuck in close confinement with Ravi means those secrets, like the chicken wings and beer in her fridge, won't stay secret for long.

The When Harry Met Sally resonances are very deliberate: Sethi even opens up with a series of video interviews of older couples who met that way, in a direct nod to Rob Reiner's beloved Greek chorus of couples explaining their own romantic beginnings. The audience knows the timeline is compressed here: with only a few days of the shelter-in-place, or at least until Ravi can get a rental car and flee, the will-they, won't-they dance is more a breezy cha-cha-cha than a drifting waltz. But then, Nora Ephron was asking a different question: For Harry and Sally, it was about probing the lines between friendship, attraction, and love. For Sethi and Soni, it's about looking at all the arranged marriages that have worked and asking why. You can't just have two people meet and expect them to live together, Rita hurls at Ravi, who immediately counters that, well, isn't that what they're doing?

7 Days never blanches away from its pandemic setting, and when Covid-19 finally seeps through the door of Rita's messy apartment it's with the same game-changing weight as when Harry stares up at the ceiling in blank terror while Sally snuggles, tousle-haired, in his arms. But just because 7 Days knows the beats of the classic rom com, that doesn't make it a cover version. Instead, it's a delightfully new riff, one filled with cultural specificities and timeliness. Can these two crazy kids make it work? That's what really matters, and Soni and Viswanathan's easy charm makes a week trapped with them breeze by.

7 Days streams as part of the Tribeca Film Festival, running through June 20.