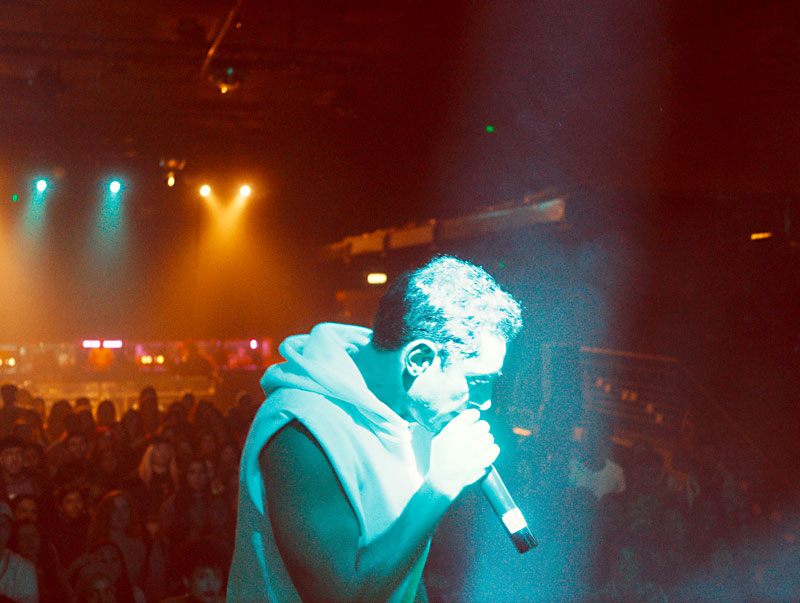 Zed thinks he knows who he is. He's one of Britain's breakout rappers, redefining what it means to be Pakistani and Muslim in the UK. But in Mogul Mowgli he has to consider a new fusion for those battling elements of himself.

His nature is in rebellion with itself - literally. On the eve of a major support slot that will take him across Europe and into stardom, an inherited autoimmune disease starts wasting his body away. His mind doesn't seem far behind, as he's forced to contend with the image he has constructed for himself, and whether it can withstand these new trials.

It's a little easy and trite to see Mogul Mowgli as a retread of Ahmed's blistering performance in Sound of Metal. Both films focus on a musician losing their music due to a medical crisis, so there is undeniable common ground. But Mogul Mowgli uses the narrative setup to discuss a different sense of alienation. Zed represents the dilemmas of British Pakistani kids, and is haunted by visions: of childhood in his father's restaurant, and of a flower-shrouded figure who calls himself Toba Tek Singh (Jeff Mirza). That's a reference to Saadat Hasan Manto's 1955 short story about how India and Pakistan exchanged patients in psychiatric hospitals according to their religion. The central character, a Pakistani Sikh living in India called Bishan Singh, becomes the personification of the stateless, incapable of comprehending this new identity that has been foisted upon him.

Mogul Mowgli is as powerful as Sound of Metal but also more personal, and also more political, as Zed raps about rejection from all sides, and takes on the thorny matter of cultural appropriation in pop culture. At times Zed literally wrestles with representations of his Pakistani identity, a dreamlike battle that merges with his real-life conflict with his disease, and with knock-off rapper RPG (Nabhaan Rizwan), who he sees as biting his style rather than an acolyte.

The script by Ahmed and director Bassam Tariq makes it hard to see anyone other than Ahmed in the part, and not just because he writes and delivers his own rhymes (a nod to a successful parallel career as Riz MC, one third of the Swet Shop Boys). But it's also shown fearlessly from Zed's perspective, with no attempts to explain figures like Toba Tek Singh, or particular acts of faith. Tariq blurs the lines between Zed's experiences and visions like a cold fever, creating emotional rather than literal truths. This doesn't alienate the viewer, but it does require them to pay attention, to immerse themselves. The audience is thrown into Zed's world (or rather worlds), and it's Ahmed's astounding performance that provides the through line. It's OK to be lost, because Zed is.