Latest Bundy biopic is a portrait of the investigator 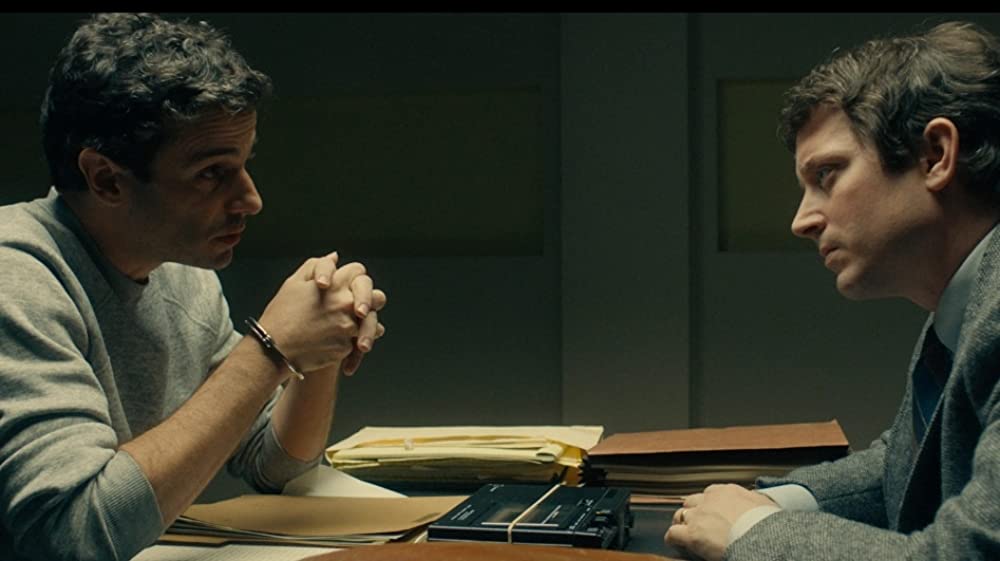 "Oh, he's guilty alright." There's a famous photo. Two guys in a corner table in some rustbelt city in the mid-1980s. One looks like he wandered into a bar from a shift in the office, tie straight over a crumpled blue shirt. The other's off the production line in a faded yellow tee, with the air of a prankster who just told an off-color joke to his buddy.

Yet the unlikely cohorts are not drinking buddies. It's FBI profiler Bill Hagmaier, and serial killer and sexual sadist Ted Bundy, the day before Bundy was executed. The dynamic of the photo would be reason enough to make a movie about these two unlikely conversationalists, even if there wasn't already a cottage industry of Bundy movies and series (including the double-header from Joe Berlinger in 2019, the documentary Conversations with a Killer: The Ted Bundy Tapes and the narrative Extremely Wicked, Shockingly Evil and Vile). No Man of God, which debuted this weekend at the Tribeca Film Festival, presents the story behind that photo, even if the moment of the snap is never reenacted.

Between 1984 and 1989, Hagmaier (here played by Elijah Woods) and Bundy (Luke Kirby) exchanged letters and sat down for interviews, including that last one the day before Bundy was electrocuted at Florida State Prison. Everyone knew that he had been on a long, murderous rampage, balancing a seemingly normal life with acts of horrifying violence, his monstrous manner hidden behind that preppy demeanor. Hagmaier wasn't assigned to interview him to necessarily extract a confession but, as FBI Behavioral Science Unit chief Roger Depue (Robert Patrick) explains, to gain some insight into the psychopathology of mass murderers. Profiling was still in its early days, and new hand Hagmaier has a knack with informants, so maybe he's the man to maybe get something out of the taciturn and combative Bundy.

In their first meeting, Hagmaier plays the naif, and Woods' perpetual youthfulness feeds into that aspect of the investigator's plan. Kirby's Bundy is, for once, blindsided, and it's the crack in his armor that allows Hagmaier in.

"Oh, he's guilty alright." That's a key sentence, spoken by Hagmaier to Depue in a post-interview debrief. This version of Hagmaier never loses sight of the fact that he's in the room with a man who committed dozens of atrocities and never showed contrition. Indeed, No Man of God folds in one of the most under-studied elements of Bundy's story, when he tried to use a TV interview with evangelical anti-pornography campaigner James Dobson (Christian Clemenson). Hagmaier watches outside as Bundy tells the man who plays a puritan on TV exactly what he wants to hear, for Bundy's own ends.

The script (written by Austin's C. Robert Cargill under the nom de plume Kit Lesser) leans on the old, post-Silence of the Lambs duet between investigator and killer, but that's reasonable, because Thomas Harris drew heavily on the Bundy tapes. However, it wasn't just Hagmaier and Dobson. In his final days, Bundy talked to Washington State investigator Robert Keppel (mentioned in passing, but not by name), and their relationship was explored in the 2004 TV movie The Riverman. He sat down with Salt Lake County Sheriff's Detective Dennis Couch about two unsolved murders in Utah. This all came after a long series of interviews with investigative reporters Stephen Michaud and Hugh Aynsworth. Bundy was media-savvy and manipulative, and he used the stories he was telling to get what he wanted. If we're truly going to understand the Bundy who played coy and manic with confessions, that feels like the story the needs to be told, rather than hinted at.

Yet No Man of God is ultimately less about Bundy than it is about Hagmaier, much as Extremely Wicked, Shockingly Evil and Vile was really about his girlfriend, Liz Kendall. In the same way, it never lets Hagmaier become a bit player in Bundy's story. The cop is doing the manipulation, even as being with this charismatic, desperate, doomed man wears him down. No Man of God isn't trying to be the definitive version of either man's life, but it steers clear of false equivalence. "Turn the tape off," Bundy says often, as if his unrecorded confessionals have some sanctified privacy between himself and the nearest thing he has to a friend. Yet director Amber Sealey gives the last word to Hagmaier, not Bundy. It's subtle, and may not be enough for the growing group of critics and viewers that worry that the cinematic obsession with serial killers ends up lionizing them, but it makes Bundy what he always was: pathetic.

No Man of God streams as part of the Tribeca Film festival through June 20, and will be released Aug. 27.