Seven Decades of Fame and Fear in Rita Moreno: Just a Girl Who Decided to Go for It 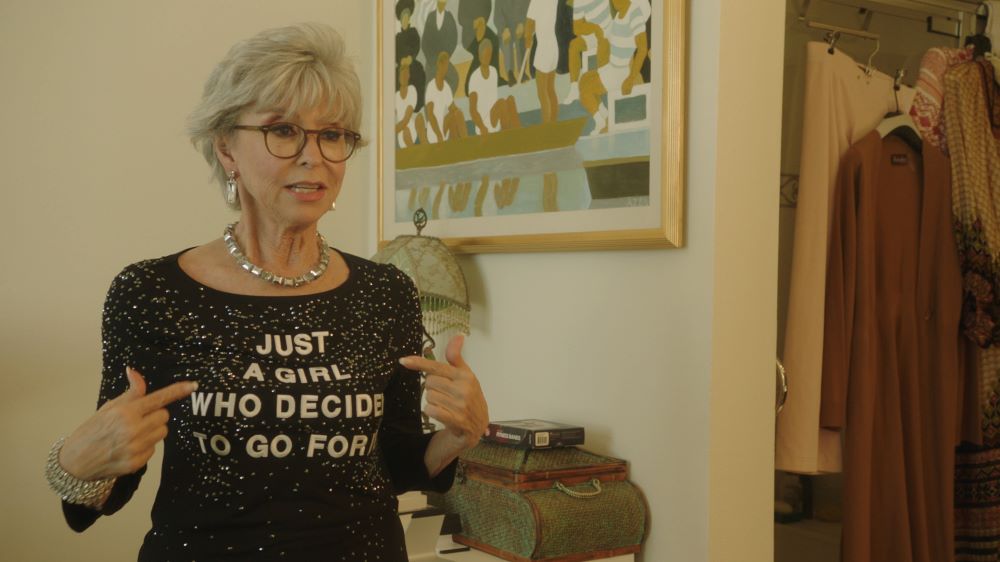 The legendary Rita Moreno in Rita Moreno: Just A Girl Who Decided To Go For It. The documentary plays at Cine Las Americas in Austin tonight, Tribeca Film Festival over the weekend, and opens nationally June 18. (Image Courtesy of Roadside Attractions)

Everything comes around again. When Meriam Pérez Riera started making her new documentary about Rita Moreno, she had no idea that the star of stage, screen, radio, and, well, everything, would be in the new version of Westside Story, 50 years after she won an Oscar for her performance in the 1961 original.

The film they made together, Rita Moreno: Just A Girl Who Decided To Go For It will be the in-person opening night film for this year's Cine Las Americas film festival, before screening and streaming next week as part of the Tribeca Film Festival. It arrives just months before the Steven Spielberg-directed version of Leonard Bernstein's Broadway masterpiece soars into cinemas, with Moreno moving from young Anita to a new part, Valentina (a proxy for neighborhood drug store owner Doc). "She has those perfect circles in her career," said Riera.

Moreno's career is arguably unmatched: 77 years of performances, and only the third person to ever claim the EGOT (with Emmy, Grammy, Oscar, and Tony wins). She's survived unimaginable changes in society and the entertainment industry, starting off as one of the last of the studio players, where loyalty was everything, through to the revival of One Day at a Time, where the show bounced between Netflix and Pop. She's also been through the worst that Hollywood can throw at a woman of color: cast as generically ethnic (everything from Tahitian to Siamese), sexually assaulted, discarded as too old, too difficult, too other to be a star. As a documentarian, where do you even start? Riera said, "Instead of going through her chronological story, I wanted to show specific themes that, for me, were very important. ... Being a woman, being an immigrant, being insecure, especially a woman in her time who went through everything that a woman in Hollywood can go through. They're things that we're fighting now, and talking about now, but she went through that 70 years ago."

“She has those perfect circles in her career” – Meriam Pérez Riera, director of Rita Moreno: Just A Girl Who Decided To Go For It
First, she narrowed her focus to just Moreno's film and TV career, but even then it was a challenge. Everyone has a different role with which they associate Moreno, whether it's Anita, or Sister Peter Marie Reimondo in Oz, or Violet Newstead in the TV version of 9 to 5, or as a member of The Electric Company, or as the voice of Carmen Sandiego. But Riera kept her themes in sight at all times, and that lead her to some deep cuts in Moreno's filmography, like obscure crime drama The Night of the Following Day. "It's not an important movie, because it's important in the documentary because it's with Marlon Brando, with whom she had a relationship, and what it meant to do a movie with him, and have some closure."

That a film with Brando would be a personal footnote for Moreno shows what a star-studded career she has had, sharing sets with luminaries from Héctor Elizondo to Norman Lear, many of whom are interviewed for the film. Then there are celebrities who give context to her life, like Whoopie Goldberg and Eva Longoria, "who have gone through similar experiences." However, there was only one interviewee who left Riere a little stunned: "Morgan Freeman. Everyone else, we interviewed in New York, L.A., or Berkeley. He was the only one where we had to go to his house." She even admitted to being a little nervous. "He likes to joke, but he's very dry so I didn't know if he was joking or not. At the beginning, it took me a while to understand his humor, but that was the interview where I went, 'Oh my god, I can't believe I got this.'"

While those peers and contemporaries sing Moreno's praises, Riera definitely did not want to make a puff piece about an icon. Instead, she wanted to show "the Rita that I used to see behind the camera on the set of One Day at a Time, which is a woman with no makeup, without a wig, driving to set every morning, and every evening going back home. I wanted to show that person, because that's a person that nobody gets to see, and to me it was the only way that the audience could relate to her, and the audience could feel that they are a part of her."

And Moreno agreed. "She'd seen a lot of biopic documentaries, and she didn't want this to be a show reel of her career. Because that's boring, and that's been done so many times."

However, it still took a year of following Moreno around, and talking about their shared experiences as Puerto Rican women in Hollywood (and, Riere added, the support of One Day at a Time producer Brent Miller), to finally gain the performer's trust. "Those conversations were like therapy," said Riere, "because she was giving me advice, and that's how she was able to open up."

That lead to the core of the moviemaking process: three interviews with Moreno, totaling almost 15 hours of footage. "The last time I interviewed her, I told her, 'This is it. This is when I ask you everything that I haven't yet, and it's going to be hard.'"

That's when she truly captured the Moreno that she had known in person on camera. "She had no makeup," said Riere. "She decided, 'I'm not going to wear any makeup because I'm going to cry. OK, bring it on.'" That interview lead to some of the most intimate and compelling moments of the documentary, including subjects Moreno has rarely touched upon in public, like her 35-year marriage to Leonard Gordon. Such intimacy created a weighty bond between interviewer and interviewee, Riere recalled. "There was a moment when her and myself, we were drained completely. We had to stop for a little bit, and go back again."

Rita Moreno: Just A Girl Who Decided To Go For It

The film will go on general release, June 18.