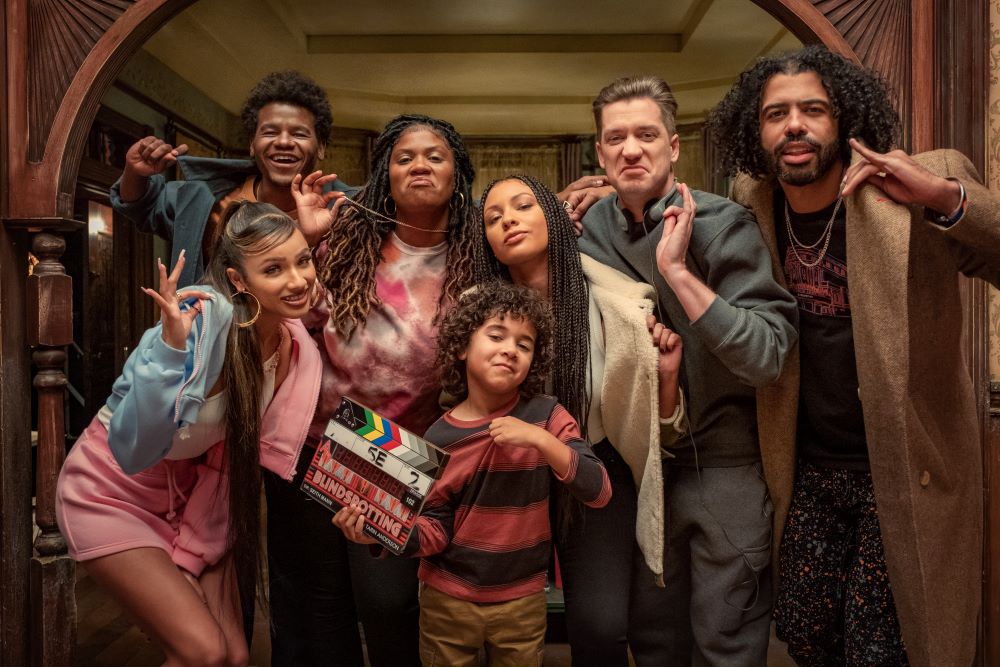 The cast of Blindspotting, the new show from Starz spinning off from the 2018 film. The show is part of the lineup for this year's virtual ATX Television Fest. (Image Courtesy of Starz)

What do you see? That will be a first look at Blindspotting, the spin-off series from the critically-lauded indie hit film, just announced for this year's virtual ATX Television Festival (June 11-20).

The new show from Starz (premiering June 13) picks up where the film left off, with Miles (cowriter/coproducer Rafael Casal) in trouble as always. Yet this time there are bigger consequences, as he's sent to jail, and it's left to his partner, Ashley (Jasmine Cephas Jones), to keep everything together. The festival has gathered Casal and film/series co-creator Daveed Diggs, as well as writers Alanna Brown, Nijla Mumin, Priscila Garcia-Jacquier, and Benjamin Turner to discuss making the jump from big to small screen for their story about life in a rapidly changing Oakland.

ATX will also be getting suitably weird, with a special panel presented by streaming horror specialists Shudder (home to the resurrected Creepshow) on horror anthologies, with terror legend and FX master Greg Nicotero in conversation with Tananarive Due and Steven Barnes, writers of the upcoming "Untitled Black Horror Anthology, and additional panelists (TBA). And if that's not weird enough for you, catch a first screening of UFO, the new Showtime series produced by J.J. Abrams's Bad Robot about our fascination with unidentified flying objects (with the recent discussions about how much the U.S. government does or doesn't know, this old obsession seems very, very timely).

• A conversation with Kevin Can F**K Himself creator/EP Valerie Armstrong, and stars Annie Murphy (Schitt’s Creek), and co-star Mary Hollis Inboden (The Real O’Neals) before its June 13 premiere on AMC+ and June 20 debut on AMC.

• More from Apple with the team behind another of their comedy hits, the animated musical Central Park, before the arrival of season 2.

• Another Apple returning show with co-creator/executive producer Dana Fox and the cast of Home Before Dark talking about their sophomore season (debuting June 11) and the challenges of staying true to the real Hilde Lysiak in their true-crime drama.

• A first look at Sex/Life, the new series from Netflix (debuting June 25) that the streamer describes as "the story of a love triangle between a woman, her husband, and her past that takes a provocative new look at female identity and desire." Stick around for a conversation with creator/showrunner Stacy Rukeyser, executive producer J. Miles Dale, and cast members Sarah Shahi, Adam Demos, Mike Vogel, and Margaret Odette.

• A screening and discussion for the unaired pilot for History of Them, the multi-cultural ensemble developed for CBS in 2018 by creator, writer, executive producer and ATX Advisory Board Member Gloria Calderón Kellett, who will be in conversation with director Pam Fryman and cast members Brett Dier, Ana Villafañe, Caitlin McGee, Chris Powell, Amit Shah, and Felix Solis.

There will also be a host of topical conversations in association with the Syndication Project, ATX TV's non-profit:

• Indigenize the Narrative - A conversation with Native American and Indigenous actors, writers, directors, and producers;
• “Guess Who’s Laughing Now” presented with GLAAD, focusing on trans and non-binary characters in comedy;
• “The Messy Middle” presented with DREDF's Disability Media Alliance Project;
• And a series of three conversations with the USC Annenberg Norman Lear Center’s Hollywood, Health & Society on medical issues in televised entertainment with a panel on changing narratives on HIV and AIDS, and a discussion on abortion and reproductive health, joining the previously announced panel on how TV is handling the pandemic.

This all comes on top of a week's worth of programming already on the schedule, including a special tribute to Award in Television eXcellence 2021 recipient Michael J. Fox in conversation with ATX TV alum Dennis Leary, and the closing night premiere of HBO's new drama The White Lotus.

ATX Television Festival Season 10 runs June 11-20. Watch out for further announcements, and get tickets and passes, at www.atxfestival.com.