Why Darren Lynn Bousman Came Back For Spiral

Rock, racks, vices and games: the story behind the new Saw Samuel L. Jackson, Darren Lynn Bousman, and Chris Rock on the set of Spiral, the ninth entry in the Saw franchise (Image Courtesy of Lionsgate)

Darren Lynn Bousman, director of Spiral, has one promise about the the infamous body-mangling, limb-wrecking, jaw-splitting traps of the Saw movies. "They work the way we say they work."

He's not kidding. Case in point: The Rack from Saw III. "That's the one where the man is in there, and his arms are outstretched, and it begins to twist," said Bousman. As is the way of Saw and its very practical effects, the mechanism really worked. "It's hooked to gears and a motor, and it turns one degree a second until it would completely snap your limbs. So we always have to go through a safety protocol. The stunt guy gets in the trap, and immediately he's going 'Safety! Safety!' and we had to stop it, because it was turning his arms and his neck the same way we say it turns."

“‘What if we stitched his lips together?’ No, that wouldn’t kill him, and I already did a stitched lips thing in Saw IV. So, what if he has to rip his tongue out?” - Darren Lynn Bousman, director of Spiral
That's the level of thinking that goes into the Saw movies, and into Spiral. The ninth in the series, and the first since 2017's Jigsaw, it sees the return of Bousman to the franchise for his fourth entry, having directed II, III, and IV. This time the original Jigsaw Killer is long gone and a successor has taken his place, killing off corrupt cops. As always there are clues are being left, this time for Detective Zeke Banks (Chris Rock), the last honest officer in town. But if he's not on the kill list, why is the new player of games so obsessed with him?

It may be a new era for Saw, but it starts, as always, with an elaborate trap that starts with a simple conceit. "A guy wakes up, his tongue is in a vice, and he has to leap off a ladder to rip his tongue out," Bousman explained, but there's a lot of thinking and planning that goes into the execution. "That started with a guy that we knew was that he lied under oath. So we went, 'OK, it's got to be something to do with his mouth. What if we stitched his lips together?' No, that wouldn't kill him, and I already did a stitched lips thing in Saw IV. So, what if he has to rip his tongue out? 'OK, what if he has to have pliers and rip his tongue out?' Yeah, but that's not visual. 'What if he has to jump off something and rip his tongue out?' It was originally written as fish hooks. He had fish hooks in his tongue, but then the stunt guys and the engineers go, 'Well, if you jump off a ladder with fish hooks, it would just tear your tongue. It wouldn't rip it out.' So then they started doing weight tests - what would it take to actually tear it out? So then it came to a vice, and then we did tests. Wouldn't it rip your throat out as well? Where would it dislodge? Could you survive it?"

Wait, engineers? Tests? "If you were to walk into my office on any given day, the amount of disgusting pictures on my wall, to see what would really happen, it is insane," he said. "I'm on every FBI watch list. I'm 100% going to jail because of my Google search history." It's already lead to an embarrassing moment with his assistant, Amanda de Souza, when he was researching the tongue clamp trap. "I was in a production meeting with the special effects guy, and I said, 'Amanda, can you go grab my computer please?' So she comes in, and she has my computer, and with a smile she goes, 'Hey, Darren, here's your computer.' As she opened up the computer, it was just tons of tongues in BDSM things, and I go, 'I have an explanation.'"

It was Bousman who turned Saw from a tricky little giallo homage into a full-blown, Halloween box-office dominating franchise. So, after 14 years, three direct sequels by other directors, and an attempt in 2017 to revamp the series with Jigsaw, what brings him back?

“‘You’re gonna meet with Chris Rock.’ And my first response was ‘Chris who?’ because never in a million years would I think it was that Chris Rock.” - Darren Lynn Bousman, director of Spiral
Well, not what, who. Chris Rock, who had convinced Lionsgate to update the series. "How do you say no when you Chris Rock wants to do a Saw movie?"

At the time, Bousman wasn't planning to make a movie, never mind another Saw. He'd started out in theatre with a stage version of what would become his cult hit Repo! The Genetic Opera, and post-Saw IV had moved into augmented reality gaming with projects like The Tension Experience and its erotic counterpart, The Lust Experience. In 2018 he was about to fulfil every theatre kids' dream by directing on Broadway, when he got a call from series producer Mark Berg. "He said, 'Listen, we sent a script to you. Where are you?' I said, 'Well, I'm in New York.' 'Well, we need you back in L.A.' I said, 'I can't. I'm in New York.' He said, 'No. You're gonna read this script, you're gonna meet with Chris Rock.' And my first response was 'Chris who?' because never in a million years would I think it was that Chris Rock."

Obviously, he booked a flight, and started reading the script for a film called Organ Donor. That's when he realized that the trap had been sprung. "It wasn't until page 14, 15 that they mention the word Jigsaw. I was like, 'Is this fucking Saw?' And then I kept reading and reading and reading, and I remember the minute I got off the plane I called Mark Berg and went, 'Shut up. Chris Rock. The Chris Rock?' Yes, the Chris Rock.' So the next day I had breakfast with him, and it's insane. Here's this guy that I grew up watching, talking about his love of Saw II and III. I was just like, 'Oh my god, I'm talking to this guy that I've idolized, that I've watched on TV host the Academy Awards, all this other shit, talking to me about his admiration for movies I'd directed.' So that was all it took."

But on a more personal level, there's something invigorating about returning to the franchise. "I equate it to gas in a car. I am the car, and Saw is the gas. Meaning, having Saw II be a success put a full tank of gas in my car and allowed me to make weird shit. It allowed me to go make Repo! The Genetic Opera, it allowed me to go make The Devil's Carnival, it allowed me to do Tension. But that good will only get you so far, and at a certain point you have to refill the gas tank." Those other projects, he admitted, don't make much money "but the Saw franchise is so beloved by people all over the world, you come back to Saw and again I refill the gas tank to make more weird shit." 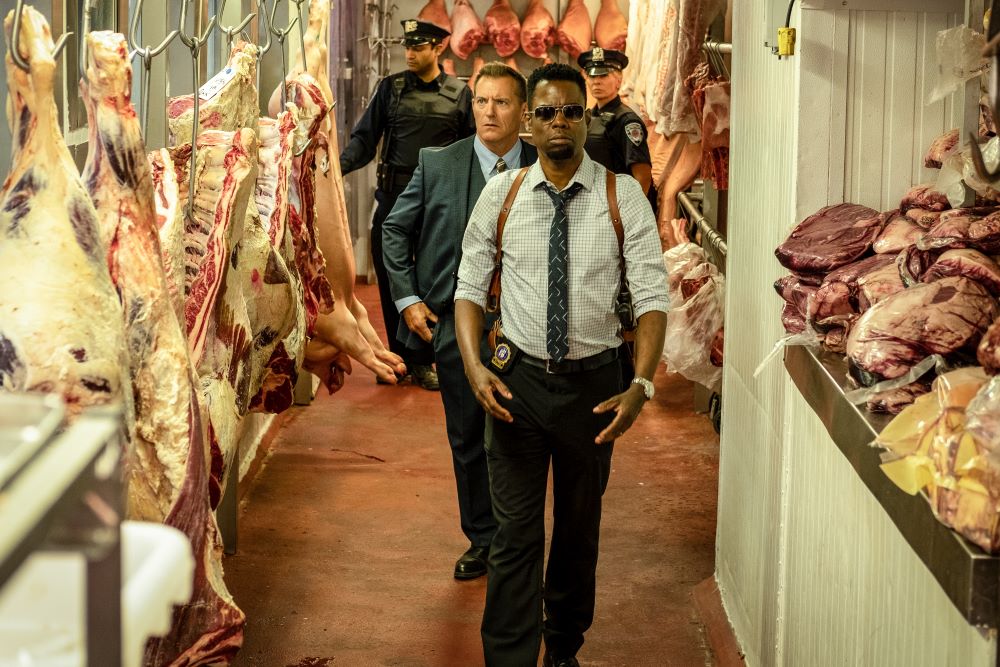 It’s not really a horror film, it’s a cop thriller with some very horrific scenes in it.” Darren Lynn Bousman on the new direction for Spiral, the latest in the Saw series

Spiral isn't a reboot of the franchise, but it's definitely got a new emphasis. "It's not really a horror film," said Bousman, "it's a cop thriller with some very horrific scenes in it." In the first eight films "the police were a central B-storyline. It was side-storyline, whether it be the FBI or the Metro police department." It was Rock's idea to place the cops and police corruption central to the script, but it wasn't a response to the last 18 months of protest, and renewed attention on police violence. The script was written in 2018, and filmed in 2019, "but the sad reality is that this isn't new," said Bousman. "People just care about it now. They've had enough now."

However, Bousman made a very important decision about who should be hunting the mysterious new killer. "Zeke is a cop, he's a detective, just to balance it so it's not unfairly pointed. If you're going to portray these officers as corrupt, then you have to have the hero be of the same department, the same ilk as those people."

But whatever changes in the world of Saw, there have to still be the traps. In the swathe of Saw-a-likes that have followed, Rube Goldberg murder machines overtook plot, and Bousman was determined to not let that happen with Spiral. "You have these actors - Max Minghella, Chris Rock, Sam Jackson, Marisol [Nichols] - and you want a bigger, more commercial audience, but you also need to pay service to the fandom, and that fandom has expectations." Call them the three Ts: "twists, turns, traps - and the 'Hello Zepp' theme song from Charlie Clouser. So you know you have this stew that you have to make, and you have to mash these things in together."

With Spiral, he sought to reverse a trend in the later Saw movies, where the plot was only there to serve the gore, not vice versa. "We actually cut back on a lot of violence. In fact, there was an entire trap that we shot that we cut out of the movie," he said. "It's more about this relationship between Chris Rock, his father, and the department. The traps are just the icing on the cake."

Spiral opens in cinemas this weekend. Read our review here.