How Chris Baugh raised the evil of Irish vampire 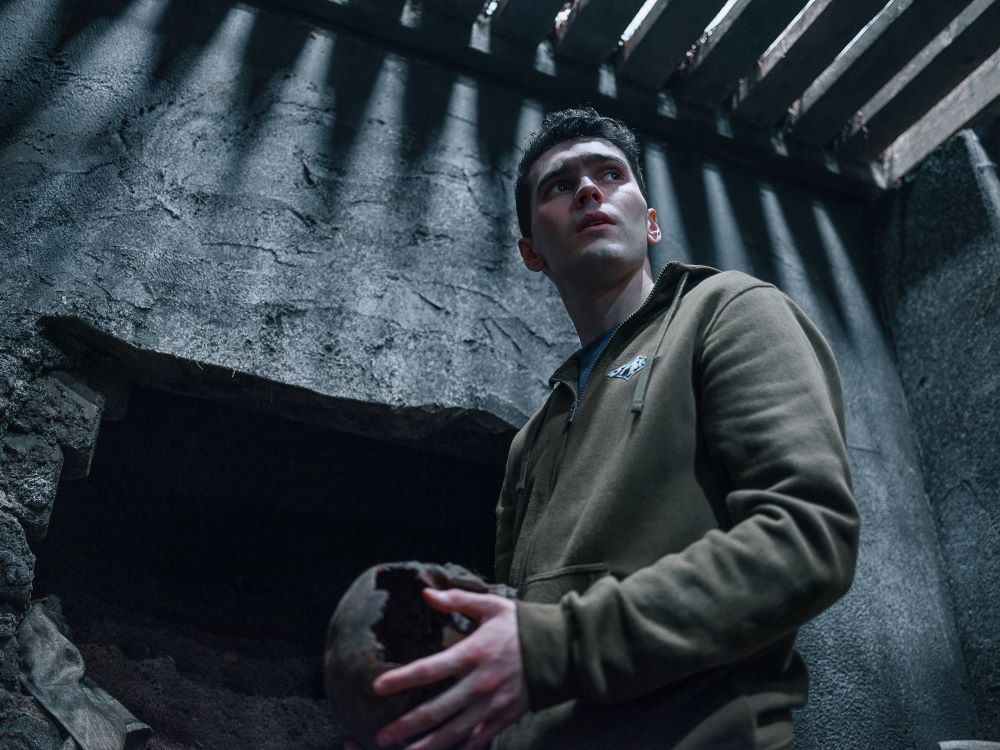 There's something nasty in the ground of Six Mile Hill, as Eugene (Jack Rowan) is about to find out in Boys From County Hell, now on Shudder

Vampires are vile. They are not your exciting friend, they are not sparkly, they are not sexy, and in Boys From County Hell, the bloodsucker is ancient, evil, and really look like its been buried for centuries

In the gory comedy-tinged horror from director Chris Baugh (streaming now on Shudder), the creature plaguing the bucolic and muddy village of Six Mile Hill is Abhartach, a creature of Irish folklore. Baugh said, "From the very genesis of the project, I wanted to do something that made vampires scary, and made them organic to Ireland and to the landscape, making them primal and scary and of the earth."

The subject of an ancient tale, first collected in Patrick Weston Joyce's 1875 tome The Origin and History of Irish Names of Places, Abhartach was a magical tyrant, finally deposed and restrained underground by magic. Like most folklore, there's no consensus on what he was (some say a dwarf, some a giant), but in some versions of the story, he rises from his grave to feast on the blood of the descendants of his subjects. "Some people have said it's the first ever recorded version of a blood-drinking undead creature that returns from the grave," said Baugh.

Not that he's completely new to monsters. In 2010, when he was still trying to get a start in films, he was working for Belfast-based kids TV production house Sixteen South, "and one of the perks of that job was that I got to work on Sesame Tree, the Irish version of Sesame Street. I got to meet the people from Sesame Workshop, and see how the sausage is made in the factory there, in terms of the puppets."

“Some people have said it’s the first ever recorded version of a blood-drinking undead creature that returns from the grave” - Chris Baugh on Abhartach, the vampiric villain of Boys From County Hell
But book-loving fuzzy Potto and his literal bookworm buddies Samson and Goliath are a far remove from the barbarous Abhartach. Baugh came across the legend when he was looking for a sorcerous antagonist, so when designing his movie version, "we started with the myths and the legends around him, and the fact that he can't be killed. He can only be subdued by stabbing him through the heart, and burying him under a pile of stones."

That lead Baugh to a perennial problem with vampire movies: the bloodsuckers are rarely dirty enough. Baugh said, "So many of these films, you see these creatures come out of the ground, and we want [Abhartach] to look like he'd been in the ground for thousands of years, so he's almost part of it."

Bog bodies were a huge influence on his version of Abhartach, "bodies that had been in the peat bogs for hundreds of years. They looked so unique, with that emaciated, skinny, gangly, with leathery skin, and the fact that some of them still had their hair. That was really interesting to me, so we enlisted a concept designer to take that aesthetic and create something terrifying." From there, he found Millennium FX to design the costume and Clare Ramsey as the vampire's makeup designer, and finally he put performer Robert Nairne (Penny Dreadful, Millennium Falcon: Smugglers Run, Rogue One: A Star Wars Story, Marrowbone) under the gnarled fangs, to create a new kind of monster.

But even with a unique design, Baugh now had to solve the equation that puzzles every creature feature creator: how much to show and how much to hide. "For me, it's always less is more whenever it comes to monsters," said Baugh. "That was true of Jaws and it's still true now. So I didn't want to show too much of Abhartach, but I wanted to make sure that whenever we did show him it was effective, and he felt scary and big, like a proper climax to the story."

That "less is more" thinking had a practical aspect (when writing and thinking about budget, Baugh said, he knew that he wouldn't be able to have Nairne on-set for two weeks in full costume), but it also lead to one of Abhartach's most unique attributes among vampires: Blood pulling. That's when his magic is so strong that he doesn't even need to be near his victims, but their blood streams to him. The end result was some extremely grisly effects as victims bleed out from eyes, noses, ears, even closed wounds that suddenly re-open. Baugh explained their thinking, "Rather than seeing him going through windows and biting people's necks, what would be more interesting, visually, and something that's even more terrifying. He doesn't need to get close to you. He doesn't need to bite you. He's strong enough, and he has a powerful enough presence, that he can drain blood right out from you through any given orifice."

Raised in rural Northern Ireland, like many former country dwellers Baugh admitted to having "a conflicted relationship" with where he grew up. "I have a deep affection for it, but when I was younger I wanted to get out, so it always informs my work." His first film, revenge thriller Bad Day for the Cut, was a reflection of Mid-Ulster, "where there's a certain type of sense of humor, and a certain look to everything, and a certain type of character, and I wanted to make something that felt authentic and real and lived-in." With Boys From County Hell's setting of a small town that depends on farming and the odd rambling tourist, "I wanted to show somewhere that felt authentic to that bit of Northern Ireland, but do it within the architecture of a genre film."

That's why there's a constant conversation that anyone from small town anywhere will recognize: people wanting to leave or spending all their time talking about leaving and never doing it. Yet, as was Abhartach's unique take on the vampire, Baugh didn't want to repeat a tired cinematic trope. "I was very conscious when I was writing it that I didn't want it to be another rural Irish story where the young guy needs to get out. It's not that Eugene (Jack Rowan) needs to leave Six Mile Hill - he actually likes Six Mile Hill - he just needs to do something. That was the idea, the danger of complacency, and for him he just has to find his place in the community and some purpose."

In most such small-town, big bad beastie films, the buried menace is a mysterious force that has to be explained by some strange old resident or weird academic. Not in Boys From County Hell, where the residents know all about the myth of Abhartach. After all, it's the only reason that the occasional tourist wanders through, looking for the skull-topped cairn under which he is supposed to slumber. That's what allowed Baugh to bring in a little myth about the myth: that some people theorize that Bram Stoker took parts of the Abhartach story and wove them in to Dracula. "I wasn't interested in doing a scholarly 'did that or did that not happen?' but more the funny idea that, well, these characters believe that.

Boys From County Hell is streaming now on Shudder.