Down with Sixteen Candles says the Visions award-winner 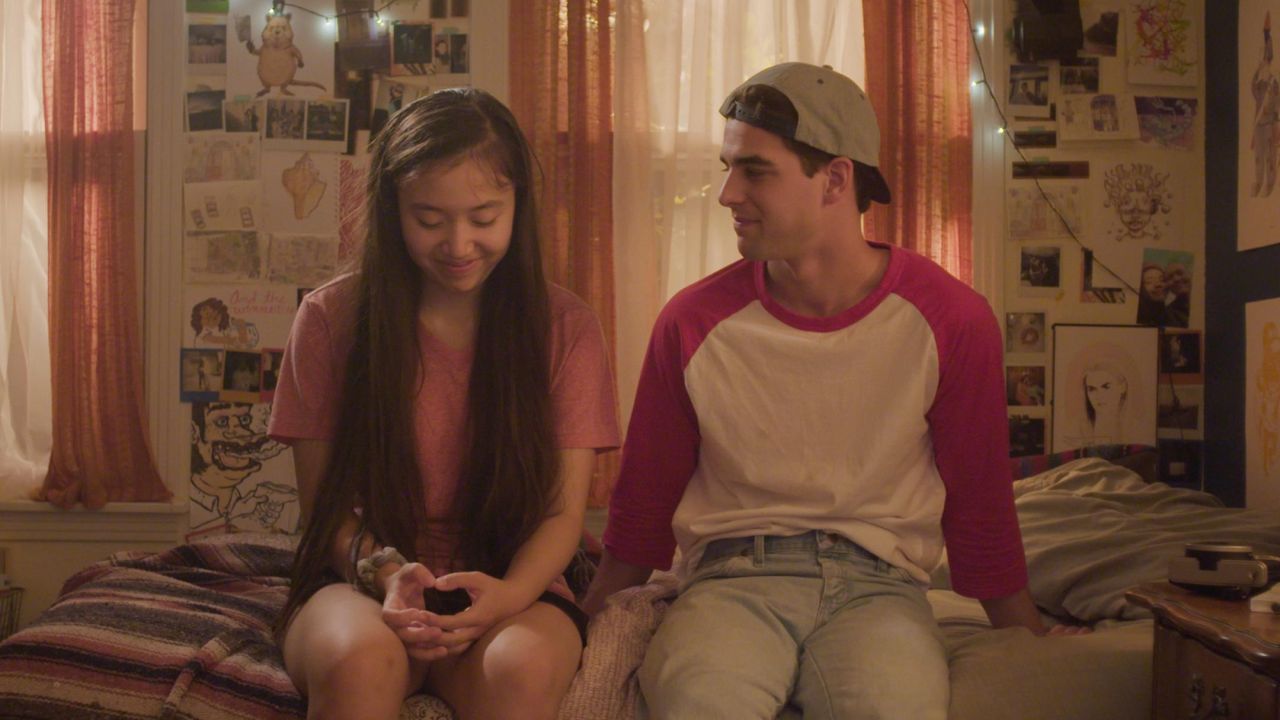 SXSW has given us plenty of treasured coming-of-age films over the years, and 2021 was no exception. Along with standouts such as 2020 Spotlight film Best Summer Ever and Grand Jury award-winner The Fallout, this year gave us some Texan teens to root for.

Mei Makino’s Inbetween Girl, which took the audience award in the Visions section (read our review here), is the story of 16-year-old Angie Chen. She’s got a white mom and Chinese dad who have just divorced, and a lot of pent-up frustration, which she channels into her art and the time capsule she’s building with an old school camcorder. As she starts seeing popular classmate Liam (in secret, for the benefit of his girlfriend Sheryl), her small world begins to explode.

The Austin Chronicle chatted with Makino for details about bringing Angie, her mixed heritage, and her creativity to life.

Austin Chronicle: Angie’s time capsule is so interesting, because it’s more than just a narrative device. It also helps speak to this very youthful, very Gen Z inclination create evidence that your experiences are real. How did the time capsule idea emerge, and what does it mean to you?

Mei Makino: I wanted to reflect that teenage feeling of feeling grown up and having all of these aspirations, but at the same time, still being a kid. ... Growing up, I was always, always attached to my journal, and I did a lot of filmmaking. That was how I made sense of my world. I wanted something visual that could reflect her psyche as we’re watching the film. And the artist [who created all of Angie’s drawings] is actually somebody I met when I was in fifth grade. I've known her for a super long time. She's always been super great at art. Her name is Larissa Akhmetova. I asked her early on, “Will you draw pictures for my movie?” And she said sure. 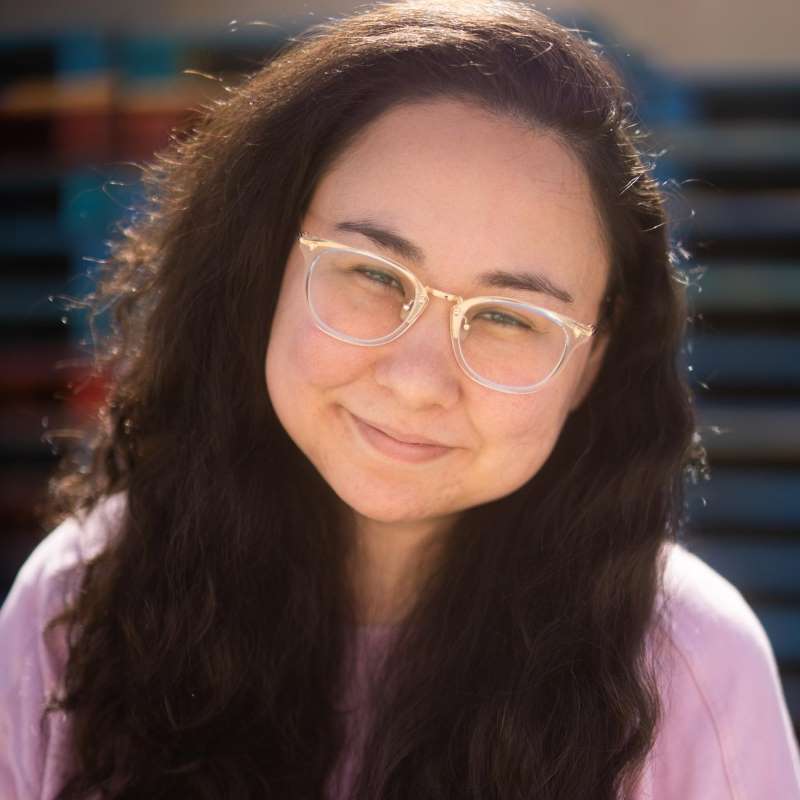 Inbetween Girl director Mei Makino (Photo by Matt Stryker)
Eventually there was a conversation we had and she's like, “I didn't realize how important these drawings are for the movie!” Because there were a lot of drawings that we added in the post-production process where, maybe a certain scene where my point wasn't hitting in the way I wanted it to hit, or I wanted to get another glance at how Angie was feeling, but I didn't want to do it in a way that was super forced, with voiceover or something. It’s a process of, ‘We have a gap; how do we fill it?’ And I mean, Larissa's artwork is just... an image can say a thousand words, right? That's all you need. reflecting on your past. When I was growing up, I was so obsessed with going through old photos of my family. And I think that Angie still has a nostalgia for when her parents were together in the past, and all the things she's missed out on.

It also acted as her therapist a little bit, because when she's with other people, she's not the most talkative person. But when she's talking to future Angie, she is saying everything that comes to mind. Am I going to be this, am I going to be that? Am I going to fill all of the check checkboxes? Everything on this list of things I want to do? And future Angie is there to listen to her. So the time capsule was—not to be trite, but—to capture this in-between moment when you’re a teen, and you think you're grown up, but you still are holding onto so many things from the past.

AC: You’ve said before that you wrote Angie’s biracial identity around your lead actress, Emma Galbraith, and that you also learned a lot about yourself from that.

MM: Oh my God, Emma is phenomenal. But yeah, I always wanted it to be a mixed character. But I still didn't know what that mixed identity meant to me. It’s such a complicated thing. I'm half-Japanese and half-white, and I didn't grow up around a lot of Japanese people. The only Japanese person I knew was my dad, and it's hard to shape your identity around one person. And people treat you like you're the token Asian. Those two things were really confusing to me.

Emma's half Chinese and half white, so obviously there’s a difference there. But still, so much common ground. We don't fit neatly into one box and people don't know how to talk to us all the time. And I think there were a lot of periods in my life where I had a hard time seeing myself within any group, or making friends, or figuring out my identity. Talking to Emma, she's had different experiences, but we just related on that a lot. Emma Galbraith is just so phenomenal and special. She is so smart. She just brought so much personality and tenacity and bravery to Angie's character. I’m really, really thankful that I found her.

AC: Casting kids and teens can be really different. How did you find your actors?

MM: We had a proof of concept video that we were doing for an Austin Film Society grant, and we were like, “Let's just cast an Angie Liam for this video. They don't necessarily have to be in the main film, but we just need to start getting funds.” My friend Marcelo [Tesón], who actually ended up being the sound designer for our film, is a huge mentor of mine. We were both working at Creative Action at the time, which is a youth arts organization in Austin. He was casting a movie and auditioning a ton of teens. He showed me Emma's audition, and she maybe said one or two lines, in the audition, but she was just so good. I was like, “Oh my gosh, who is this girl?”

“I always wanted [Angie] to be a mixed character. But I still didn’t know what that mixed identity meant to me. It’s such a complicated thing.” - Inbetween Girl director Mei Makino
I actually went to one of their shooting days, and I was like watching Emma from a distance like, “She's so good. She's professional and sweet and she hits her mark every time.” So then we had her come in and read. And then William [Magnuson, who plays Liam] was another one I found through Creative Action and he came in and blew us away. We shot the concept video and I was like, “I'm good. We don't need to see anyone else. These are the two kids.” I'm a very lucky director.

AC: Even though it’s not a huge part of the dialogue, it’s a very Texan film. The city of Galveston and the beach are important fixtures for Angie and the narrative as a whole. Are you from Galveston? And did you want the city to have that presence, where Angie trashes on the beach but learns to love it?

MM: When I first wrote the script, I didn't have a specific location in mind. But [people encouraged me] to showcase place that we don't see often. And [Galveston] was a place that fit in our budget. We were very lucky in that my parents and neighbors on our street were very accommodating and let us stay there. I don't think we would have been able to film there without that. It was cool because when you're older, you reflect on your past and realize how much your surroundings shaped you and how many ideas you've had about yourself that maybe weren't correct.

Growing up in Galveston, [I was] the token Asian in a lot of situations. In Austin, I have had super awesome meetings on power and privilege, and I've learned a lot about race socioeconomic dynamics here, and why I am the way I am. In Galveston, I didn't have that education. Realistically, a lot of kids don't. They're figuring out who they are on their own. So I wanted [Angie] to live in an environment where she didn't have all the answers given to her, or where some of the answers given to her were negative and not the best. In that opening monologue, she refers to herself as invisible. And I wanted her to think that about herself, but ultimately realize her worth.