SXSW Film Review: Through the Plexi-Glass: Last Days at the San José 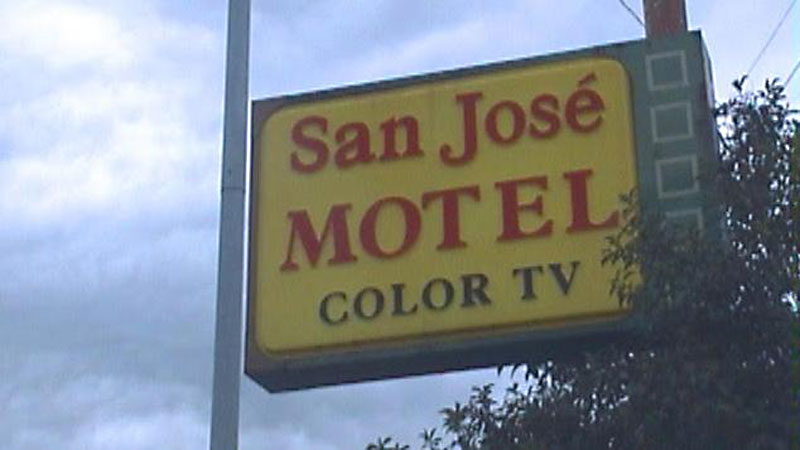 456,222. Remember that number. That's how large Austin's population was when Liz Lambert paid half a million dollars to buy the ramshackle Hotel San José.

Now we've closed in fast, or more likely surpassed, a full million, and the Hotel San José is the original chic boutique Austin hotel. But the 1990's version of the iconic green complex captured in SXSW 2021 selection Through the Plexi-Glass: Last Days at the San José was a very different place.

Lawyer-turned-hotelier Lambert's documentary of those days was not intended as a film, but a video diary. "I'm not too good with this thing," she sheepishly explains as she captures some of her earliest footage, of a repairman fixing a window on a room where a woman fled through the glass to escape a violent man. This wasn't an aberration. This isn't cute-and-cuddly hipster SoCo (a hype line that - and we apologize - a former Chronicle staffer may have first coined). This was South Congress when it was rough. Lambert's guests weren't visiting celebs trying to feign being low-key, or wedding parties, or PR people renting a cottage for press junkets. Junkies, yes, junkets, not so much. "Most people only come to the hotel to get it on, or sell drugs," one 16-year-old tells Lambert.

The unlikely hotelier made a smart decision to leave a camera on the front desk, just in case she needed evidence. But the smart creative decision was to take the camera out from behind the titular plexi-glass and talk to her regular clients. Some have been transitory in Austin's history. Others have had a longer moment, like legendary street musician Gerry Van King, aka the King of Sixth Street. Some, like Henry Prince (or Mike Driscoll, depending when you ask him) were there because they wanted to slip through the cracks, and the San José was the biggest crack there was.

Those were the characters that Lambert caught in her charming, heartfelt chronicle of a lost Austin - one that she helped lose, as she didn't plan to run a flophouse. She always wanted to renovate, to become the dreaded gentrifier, but in process she became a mother-confessor to these residents, most of whom were at their lowest ebb. That's a misstatement. The San José was a raft, and Lambert's original footage (which she premiered in 2005 in an early draft form) is now a rare history - not of Austin at a certain moment, but of the economy and culture of the weekly and monthly hotels that were America's safety net for decades. Lambert humanizes without romanticizing, and that's a powerful, strange, essential balance she strikes.

The biggest addition from the old footage is a three-minute coda that tonally and thematically jars with what had gone before. In it, the Last Days have become Lambert's own, as she ended up being ousted from the company she founded, and lost her link to the hotel that she renovated/gentrified/saved/ruined. Yet it's too brief, neither adding much to the questions she wants to raise, or really detracting from the story she has told. There's not enough of the second life of the hotel, the one that most people know best from staycations, bar visits, and SXSW parking lot shows, to really add much. Perhaps that would be served better by a follow-up that can look more closely at Lambert's role as both gentrifier and gentrified: but, for now, Through the Plexi-Glass provides a view into overlooked lives that would make Studs Terkel proud.

Through the Plexi-Glass: Last Days at the San José: