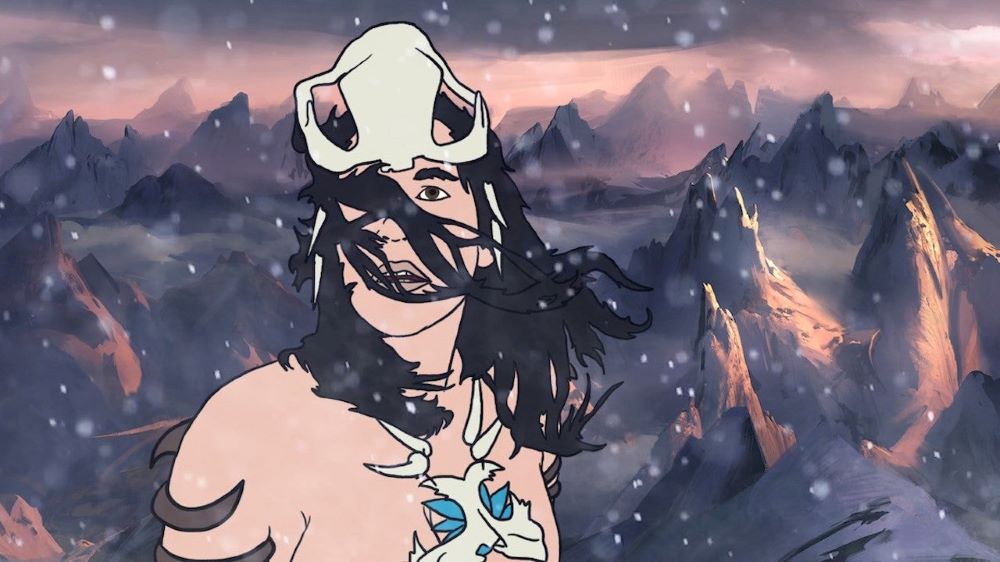 The Spine of Night

Rotoscoping - the art of drawing animation directly from live action reference footage - has been adopted by many artists, but for many audiences it's still synonymous with Ralph Bakshi, whose incomplete adaptation of The Lord of the Rings showed the form's ability to create strange, fantastical worlds.

As a high fantasy drama, SXSW Midnighter The Spine of Night knows it owes a debt to Bakshi, but there are no Hobbits in sight here. Instead, this is kin to his epic of barbarians versus sorcerers, Fire and Ice. It's from the first frame, as a naked swamp wise woman, Tzod (fantasy veteran Lucy Lawless) traverses a snowscape to a skull-shaped cave. There she seeks a mystical blue flower and its ancient guardian (Richard E. Grant). His first instinct is to raise his sword, but instead of a blade she offers a story, one that runs across a millennium. The flower is as much a curse as it is a boon, and her story of a venal prince, a mercenary barbarian, an immortal self-proclaimed messiah, a deranged priest who has a stranglehold on written knowledge, and a trio of bird-mimicking assassins (voiced by a panoply of recognizable genre-friendly names including Patton Oswalt, Joe Manganiello, Jordan Douglas Smith, and Larry Fessenden). The flower brings life and fire, but that means it can burn as well, and the spores of the bloom the Guardian has tended have caused an inferno across the world.

Like Bakshi's work, The Spine of Night builds an unforgiving cosmology - unforgiving on so many levels. As Tzod and the Guardian exchange tales, the realm is revealed as a merciless place, where power is built on blood magic, and violence is the common currency of the good and the wicked. At the same time, little is explained, and the stories they recount - anecdotes, more like - spread across eons, forcing the audience to absorb, Darmok-style. Moreover, the style of animation has Bakshi's sheen, modernized and given more depth of complexity that ever. At the same time, like Bakshi, there is a feeling that the characters are often dancing on top of the gorgeous background. When the rotoscoping and background don't mesh, the end result unnerving and almost artificial: when they are melded seamlessly (as in a tale from the Guardian about the jealous terrors of ancient gods), it's intoxicating.

Writer/directors Philip Gelatt and Morgan Galen King understand that myth cycles are often awkward, disjointed, disconnected in a narrative sense but unified on a thematic level - and that's where The Spine of Night finally finds form. Baldur dies, Heracles burns, Arachne loses her humanity, Popoca commits suicide: but from their agony comes a new cycle. For all lurid appeal of the atrocities inflicted - and The Spine of Night may legitimately be this year's goriest film at SXSW, which severed limbs and decapitations captured in eye-popping gruesome details (plus some actual eye-popping) - there's a quietly elegiac tone of birth, death, rebirth, death again. The longer you are immersed in this exchange of stories, of hope dying against darkness but proving its value just by its glimmers.

The Spine of Night