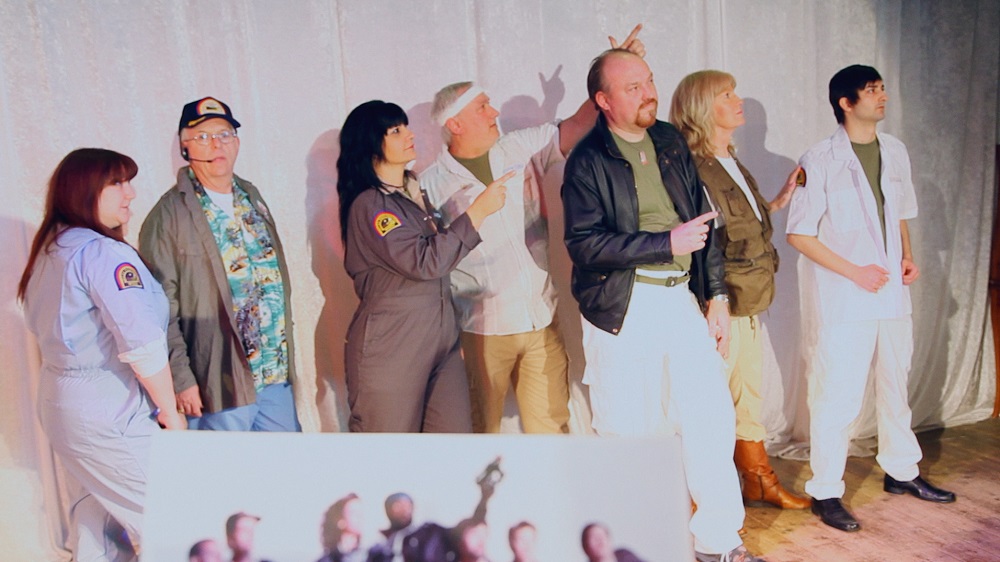 In Dorset, England no one can hear you scream. In London’s famed West End Theater district, however, audiences can and did — enthusiastically and with sold-out box-office to boot — for the little amateur theatrical troupe that could.

Made up of bus drivers and friends from the tiny British hamlet of Winborne, population 6,000+, the idea to adapt Ridley Scott’s seemingly unadaptable horror classic from big screen to small stage came from writer Mike Rustici, who had penned a far-more traditional Christmas pantomime the previous winter: Robin Hood. As the film initially explains, the British institution of these seasonal pantomime playlets are more often associated with cheery fairy tales and farcical broad humor than with gore-filled, sci-fi nightmares. Calling the downsizing of Scott’s masterpiece to the floorboards ambitious is an understatement for the ages.

Co-Directors Lucy Harvey and Danielle Kummer became instant fans of the production when they drove up from London to see one of the original Winborne-set performances. Although the play was an utter failure there, Harvey and Kummer, who immediately formed an “Alien on Stage” Facebook fan page, brought enough attention to the experience to elicit an invitation to bring the show to the West End, resulting in a real-life Waiting for Guffman scenario. Their documentary is simultaneously hilarious, touching, and one of the best “feel-good” docs in recent memory.

With a cast of wildly ambitious amateur thespians who obviously realize they may well be in over their limited dramatic skillsets, you nonetheless can’t help but cheer them on as they navigate tricky special effects issues — the chestburster scene, the beheading of the android Ash, and the alien Xenomorph itself — alongside memorizing lines, marks, and cues, any of which could go astray and deflate the best possible realism that harried, ex-armed forces director Dave Mitchell is striving for. (The only semi-equivalent attempt to recreate Hollywood-scale drama I can recall is another SXSW 2015 favorite, Raiders! The Story of the Greatest Fan Film Even Made.)

Suffice to say the enterprising members of Paranoid Dramatics (as the troupe is dubbed) pull off their ever-problematic production with laudable results and ingenious workarounds for the aforementioned effect highlights. Inspiring and uplifting in equal amounts, Harvey and Kummer’s fangs-and-all documentary is, like its subject, one of a kind.