Chaos Walking, From Page to Screen 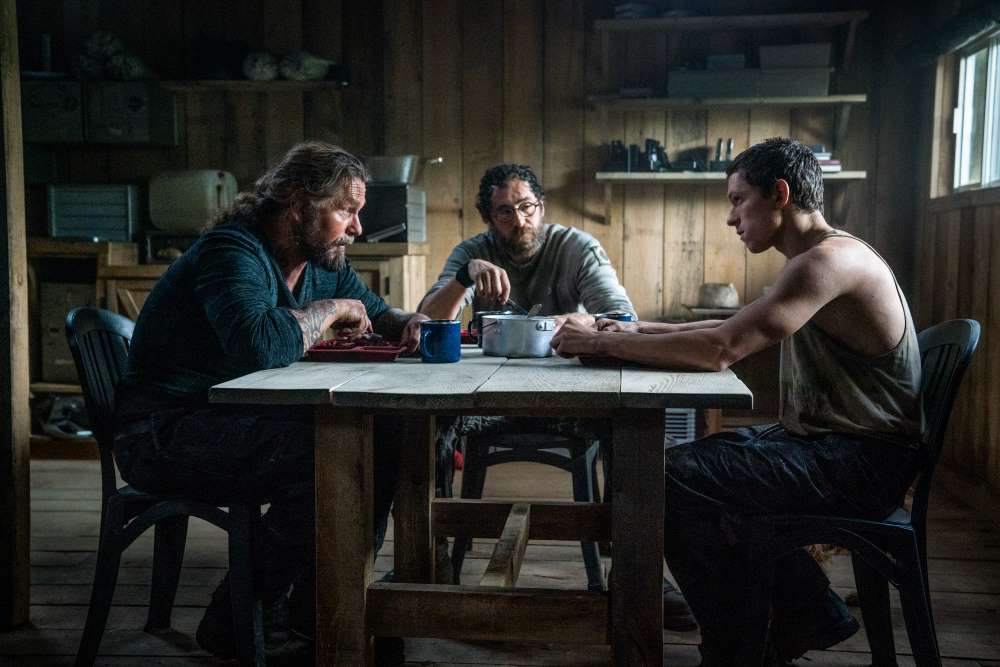 "In a time of all men, of course people would pair up" – screenwriter Patrick Ness on Kurt Sutter as Cillian and Demián Bichir as Ben, adoptive parents to Todd (Tom Holland) in sci fi drama Chaos Walking. (Image Courtesy of Lionsgate)

When it comes to adapting your own novel for the screen, as author and screenwriter Patrick Ness did for the new sci fi drama Chaos Walking, the text is not sacrosanct. "The word I use," he said, "is remix."

Ness has been through the adaptation process before, when he wrote the script for 2016 fantasy A Monster Calls, taken from his 2011 award-winning novel. However, converting his debut novel, 2008's The Knife of Never Letting Go, was a different challenge, not least because of the sheer size ("It's 500 pages, which is more than twice as long as A Monster Calls," he explained) and only book one of the Chaos Walking trilogy.

The books are set in a lost colony on a planet called New World, where a plague has wiped out all the women settlers. The surviving men now live with the Noise: a phenomenon where all their thoughts can be heard and seen. The strange status quo is thrown into the air when Todd (Tom Holland), one of the last children born before the plague, meets the survivor of a space ship crash: Viola (Daisy Ridley), the first women he has ever seen.

If it wasn't for the fact that the book is over a decade old, its pandemic plotline might seem a little too apposite. "I wasn't trying to be prophetic," Ness said. The roots of the story were not in the plague, but in the idea of a community of only men - an environment that was influenced by his own childhood living on military bases. He said, "As a gay kid, the way that we view masculinity growing up is slightly different to a straight kid, because you are always wondering if you're masculine enough, you wonder what masculinity means, you wonder if you are aware that sometimes it's very, very poisonous and not what you are."

Of course, there are inevitably going to be differences, due to the nature of each medium: a book is a book, a film is a film. You don't worry about depth of focus in a book, you can show rather than tell in a film. Each has strengths, and each has limitations, and in the process of adaptation it's the limitations that Ness said excite him the most. "I look at them as a great hurdle to leap."

Ness had written what he called "the meat" of the script before the shoot, but (as with any film, it changed one it hit the set. He saw that as coming from director Doug Liman, who he called "very, very investigative. ... He's always on set going, 'What can we do different, what can we try today?'" However, Ness didn't just hand over the script and wait to see what came out the other side: unlike some directors, Liman actually likes to have writers on the set as part of that process, so both Ness and cowriter Chris Ford (Cop Car, Spider-Man: Homecoming) were regularly on-set, "to really help Doug figure out the three acts as he was filming."

It was never about ensuring the purity of some vision of the novel: instead, Ness said he relished the collaborative nature of the production process, such as seeing how Holland was tackling Todd, and what he brought to the character. "Tom has so much charisma, and he's got so much charm, and there's so much vulnerability there that you think, 'Ah, OK, in the short hand that you need for a movie, this is so useful, and so helpful in putting across what so much of Todd in so few moves and simples gestures."

There were additional perks of being the writer on set. "You get all the catering and none of the hassle," he laughed.

Equal to the shift in medium on the storytelling, and the collaborative nature of filmmaking, were the changes in Ness himself. "I am writing as an older, hopefully better writer," he said, and that had consequences for the characters. Todd, for example, is a little older than implied in the book "but I'm a little bit older, so that works."

In fact, Ness is now closer in age to the manipulative authority figure, Mayor Prentiss (Mads Mikkelsen). As he nears 50 himself Ness found himself reappraising the mayor's moral clarity and conviction, as well as his skill for self-justification, "which makes him the most dangerous kind of leader of all." However, Ness had no interest in writing him, or any of his characters, as "pure machines of evil." Nor was this about false equivalency among flawed characters. Instead, he wanted to look at all his characters as rounded humans, and in the case of the Mayor he found fresh insight through his relationship with his son, Davy (Nick Jonas), and his relationship with Todd as a surrogate. "Writing him now, I understand a little more about where he may have come from."

Fatherhood was always an important part of Chaos Walking, most especially in Todd's family unit of his adoptive parents, Ben (Demián Bichir) and Cillian (Kurt Sutter). Now he's closer to the age where he could have adult children of his own, he was able to bring a new perspective to their relationship with each other and with Todd, and he called it one of the "logical ends" inherent in the story. He said, "In a time of all men, of course people would pair up."

It's also never noted with any particular emphasis, something which Ness said summed up a basic writing precept to which he adhered: "Todd would never call remarkable anything he didn't find remarkable." In this case, it's that his parents were a same-sex couple, but it had a real-world resonance. Even when he wrote the book, same-sex couples were still unusual in speculative fiction, and by not drawing attention to this thing that should be unremarkable, it becomes normal - both to Todd and the reader, That's a basic principle to changing the world," said Ness. "Act as if the world has already changed."

Chaos Walking is in theatres now. See our thoughts on the film, and find showtimes, here.