Texas documentary raises and struggles with questions of consent 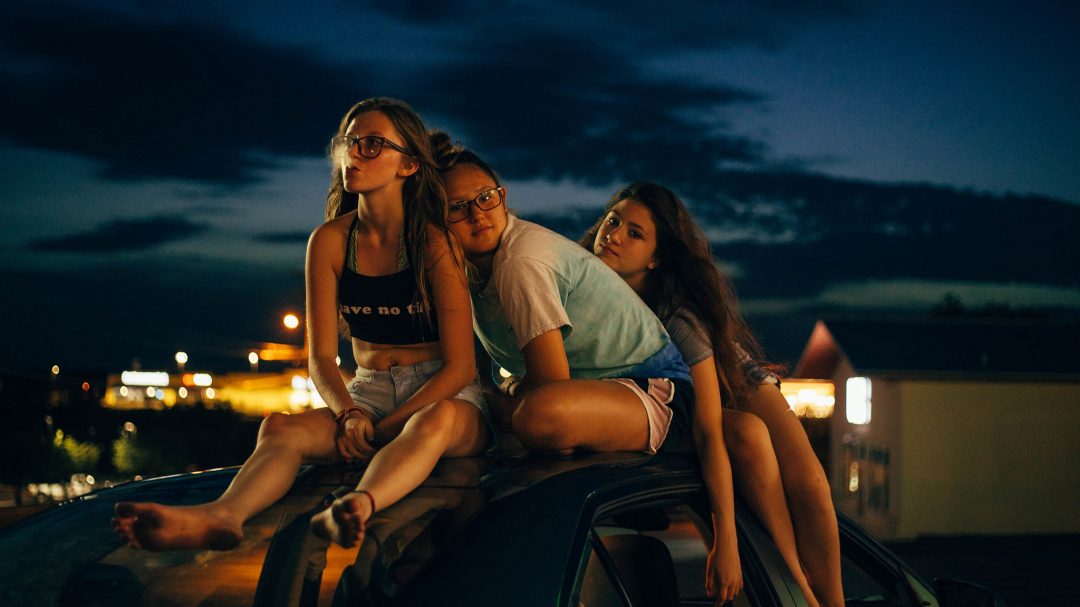 Cusp hurts. Little can be said about the film before that. Being a teenage girl hurts, and so Cusp hurts, too.

Brittney, Aaloni, and Autumn are small town Texan high schoolers. After a chance encounter at a gas station, they allowed filmmakers Parker Hill and Isabel Bethencourt to make a documentary about their lives. Hill and Bethencourt follow the trio for a summer, observing their friendships with other girls, their family lives, and the boys they party with. Hill and Bethencourt had no idea what vulnerability the project would reveal, initially just enjoying the girls’ presence and wanting to make something that made teens like them feel heard. The summer brings up endless questions about drug use, agency, and consent, making the resulting film is rather hard to watch. Even though those issues are honest parts of Brittney, Aaloni, and Autumn’s lives, Cusp verges on overexposing them.

At 16, none of the girls have reached the age of consent in the state of Texas. They know this, and the boys who chase them know, too. Aaloni and Autumn laugh nervously about the 19, 20, and 21 year olds they’ve shrugged off, and Brittney joins them, until she ends up with an older boy herself. She tells Hill and Bethencourt that before they got together, her boyfriend would complain and joke about how young she was, until one day it didn’t matter to him anymore. She makes no mention of her own desires, and it’s hard to tell if she enjoys the relationship at all. Even when her boyfriend begins to isolate her from her friends, Brittney makes sure to mention that he’s more respectful than boys her age. She hates teenagers, she says, and it’s hard to blame her; we’ve heard about all the boys she knows that have raped their girlfriends. Still, the implication is that Brittney believes an uncomfortable age gap is just the price she has to pay if she wants affection, and the film itself never takes much of a stand on that.

The winner of the U.S. Documentary Special Jury Award for Emerging Filmmaker at the Sundance Film Festival, what’s most striking about Cusp is also what’s most disconcerting. Brittney, Aaloni, and Autumn are unbelievably open about their experiences on camera. They lay out their histories with sexual assault without reservation, their faces mostly blank besides the faraway looks in their eyes. They say things like, “It doesn’t really affect me anymore.” “I don’t really remember.” Their speech is constantly tagged by qualifiers proving how much emotion they’re repressing, which we do see seep out on occasion. Autumn doesn’t have any tears left about the friend of her parents who regularly molested her as a child, but her anger boils over when a painting doesn’t come out the way she wants it to. Aaloni sobs while confronting her father about a rude comment he made to her little sister, but she’s all giggles only a few minutes later. They don’t have the care or resources they need to process all of the trauma they’ve endured, and that’s almost as painful to watch as their stories about sexual violence and exploitation.

These stories are, of course, important. We need to hear and believe young girls about the daily horrors they live with. But how much detail is too much? They might think they’ve gotten over what they’ve been through, but an adult viewer (and an adult filmmaker) knows that they haven’t. So if they’re not old enough to consent to having sex, to what degree can they consent to answering questions about their sexual abuse on camera?

There isn’t one right answer to that question. These girls should be in charge of their narratives, yes, but the adults supporting them have to be careful and intentional, and Hill and Bethencourt’s approach is a bit too freeform. Cusp doesn’t ever gesture at what a girl should do with all that pain. And because the film is billed as a “multifaceted portrait of adolescent girlhood,” it’s disheartening how little we get to know Brittney, Autumn, and Aaloni outside of their trauma. We get bits of footage from sleepovers and beach days, but they lack depth and specificity. It doesn’t seem that the girls were ever asked how their friendships make them feel or what passions bring them joy. Instead, the film wraps up with a montage of unconvincing joy, stitching together sunsets, lake days, and a few bashful smiles as if to say, “Sure, things are hard, but it’s all part of growing up!” It takes a certain level of cynicism to put so much pain on the screen and say little to nothing about it. The young people in the film and the young people who will watch it deserve a little more hope than that.